Give Peace a Chance

Jump to navigation Jump to search
This article is about the song by Plastic Ono Band. For other uses, see Give Peace a Chance (disambiguation).

"Give Peace a Chance" is an anti-war song written by John Lennon (credited to Lennon–McCartney), and performed with Yoko Ono in Montreal, Quebec, Canada.[2] Released as a single in July 1969 by the Plastic Ono Band on Apple Records (catalogue Apple 13 in the United Kingdom, Apple 1809 in the United States), it is the first solo single issued by Lennon, released while he was still a member of the Beatles, and became an anthem of the American anti-war movement during the 1970s. It peaked at number 14 on the Billboard Hot 100 and number 2 on the British singles chart. 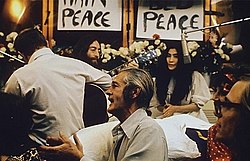 The song was written during Lennon and Ono's "Bed-In" honeymoon in Montreal, Quebec, Canada.[3] When asked by a reporter what he was trying to achieve by staying in bed, Lennon answered spontaneously "Just give peace a chance". He went on to say this several times during the Bed-In.[3] Lennon asked his press officer, Derek Taylor to find a recording engineer. On 1 June 1969, in Room 1742 at the Queen Elizabeth Hotel in Montreal, André Perry, owner of a local recording studio in Montreal, arrived and used a simple setup of four microphones and a four-track tape recorder he brought with him.[4][5] The recording session was attended by dozens of journalists and various celebrities, including Timothy Leary, Rabbi Abraham Feinberg, Joseph Schwartz, Rosemary Woodruff Leary, Petula Clark, Dick Gregory, Allen Ginsberg, Roger Scott, Murray the K and Derek Taylor, many of whom are mentioned in the lyrics. Lennon played acoustic guitar and was joined by Tommy Smothers of the Smothers Brothers, also on acoustic guitar. Some years later, André Perry recalled the occasion, and spoke about the challenges of getting a good sound out of the recording. Because of the room's poor acoustics, he said, the raw recording could not have been released without help:

Originally there were no intentions to have any over-dubs done. But when I left John, he looked at me and I said, 'Well, I'll go back to the studio and listen to this and see what it's like.' And then I decided that the background was a bit too noisy and needed a little 'sweeping.' By this I mean, we kept all the original stuff, we just improved it a bit by adding if you like, some voices. So we called a bunch of people in the studio that night, I did, actually that was my decision. And that's probably why John gave me such a credit on the single.[6] And since it was multi-track I dubbed the original 4-track to an 8-track machine and then used the other 4-track to overdub some voices. The next day I went back to John [with the mix]. They moved everybody out of the room and it was just the three of us, with Yoko, and I played it for him and he thought it was wonderful. Kept it 'as is.' There's a story going around about overdubbing in London, England. Nothing was overdubbed in England. The only thing that was overdubbed, like I said, is some of these people, and the reason why I did it, is I wanted to give him some kind of option. You see the point of the matter, it's not that we wanted to cheat anything, it was a question of like, not usable, the condition was absolutely terrible. [We took] the original stuff that was there, and added a few voices in a cleaner recording environment.[7]

When initially released in 1969, the song was credited to Lennon–McCartney.[8]

On some later releases, only Lennon is credited; viz. the 1990s reissue of the album Live in New York City, the 2006 documentary The U.S. vs. John Lennon, and the 1997 compilation album Lennon Legend: The Very Best of John Lennon and its DVD version six years later.

Lennon later stated his regrets about being "guilty enough to give McCartney credit as co-writer on my first independent single instead of giving it to Yoko, who had actually written it with me."[2]

According to author Ian MacDonald, the credit was Lennon's way of thanking McCartney for helping him record "The Ballad of John and Yoko" at short notice.[9]

The original last verse of the song refers to: "John and Yoko, Timmy Leary, Rosemary, Tommy Smothers, Bobby Dylan, Tommy Cooper, Derek Taylor, Norman Mailer, Allen Ginsberg, and Hare Krishna". In the performance of "Give Peace a Chance" included on the Live Peace in Toronto 1969 album, Lennon openly stated that he could not remember all of the words and improvised with the names of the band members sharing the stage with him and anything that came to mind: "John and Yoko, Eric Clapton, Klaus Voormann, Penny Lane, Roosevelt, Nixon, Tommy Jones and Tommy Cooper, and somebody." The third verse contains a reference to masturbation, but Lennon changed this to "mastication" on the official lyric sheet. He later admitted this was a "cop out" but wanted to avoid unnecessary controversy.[10]

The song quickly became the anthem of the anti Vietnam-war and counterculture movements,[14] and was sung by half a million demonstrators in Washington, D.C. on Vietnam Moratorium Day, on 15 November 1969.[15] They were led by Pete Seeger, who interspersed phrases like, "Are you listening, Nixon?" and "Are you listening, Agnew?", between the choruses of protesters singing, "All we are saying ... is give peace a chance".[16]

A live concert performance of the song is included on Live Peace in Toronto 1969. (Source: Apple Records) John, Yoko, and the Elephant's Memory performed the song on the Jerry Lewis MDA Telethon in September 1972. (Source: YouTube)

The British group Yes also paid tribute to Lennon's words on their 1971 release The Yes Album, in "Your Move".[17]

After being issued as a single, it appeared on album in a truncated form for the singles compilation Shaved Fish in 1975. The track's first full-length album appearance was on the compilation The John Lennon Collection. Although technically the first "solo" single released by a member of The Beatles while the band was still intact, the artist credit was to the Plastic Ono Band, not John Lennon.[18] Shortly after the death of Lennon, fans gathered outside the Dakota and sang "Give Peace a Chance".[8] The single re-charted in January 1981, peaking at number 33.[11] The song is one of three Lennon solo songs, along with "Instant Karma!" and "Imagine", in the Rock and Roll Hall of Fame's 500 Songs that Shaped Rock and Roll.

On 1 June 2008, the 39th anniversary of the song's recording, the first of three digital-only (and thus environmentally friendly) singles was released through Twisted Records exclusively on Beatport with remixes featuring a newly recorded vocal by Yoko Ono.[30] It reached number 1 on the Billboard Hot Dance Club Play chart on 16 August 2008. These are not the first remixes Ono has done of this song: in 2005, she did a new version recalling the events of the 11 September 2001 terrorist attacks on Truth; and one of the first remixes with the lyrics used in this mix was released on the Open Your Box remix album. The last instalment was released 18 February 2009, Yoko's birthday.

Retrieved from "https://en.wikipedia.org/w/index.php?title=Give_Peace_a_Chance&oldid=966588242"
Categories:
Hidden categories:
The article is a derivative under the Creative Commons Attribution-ShareAlike License. A link to the original article can be found here and attribution parties here. By using this site, you agree to the Terms of Use. Gpedia Ⓡ is a registered trademark of the Cyberajah Pty Ltd.