The government of Haiti is a semi-presidential republic, a multiparty system wherein the President of Haiti is head of state elected directly by popular elections.[1] The Prime Minister acts as head of government and is appointed by the President, chosen from the majority party in the National Assembly. Executive power is exercised by the President and Prime Minister who together constitute the government. Legislative power is vested in both the government and the two chambers of the National Assembly of Haiti.[clarification needed] The government is organized unitarily, thus the central government delegates powers to the departments without a constitutional need for consent.[clarification needed][citation needed] The current structure of Haiti's political system was set forth in the Constitution of March 29, 1987.[2]

Legislative power is vested in both the government and the two chambers of the National Assembly of Haiti. The government is organized unitarily, thus the central government delegates powers to the departments without a constitutional need for consent. The current structure of Haiti's political system was set forth in the Constitution of Haiti on 29 March 1987. The current president is Jovenel Moïse, elected in 2016 and sworn in on February 7, 2017. In 2010, there were 7,000 people in the Haitian National Police.[4]

The Institute for the Protection of National Heritage has preserved 33 historical monuments and the historic center of Cap-Haïtien.[5]

The legal system for torts is based on a version of the Napoleonic Code.[6]

Jean-Jacques Dessalines was the first leader of free and independent Haiti under the 1805 constitution. He was initially regarded as governor-general, then later called himself Emperor Jacques I of Haiti. His regime lasted two and half year (1804-1806) and ended with his assassination by disaffected leaders of his administration.[8] In 1806, Constituent Assembly created a new constitution and appointed Henri Christophe to a four-year term as President of the Republic of Haiti. The following year, the Battle of Sibert ended with the division of Haiti into the southern Republic of Haiti under Alexandre Pétion and the northern State of Haiti under Christophe.[9] In 1818, Pétion died of a fever and Jean-Pierre Boyer, Chief of the Presidential Guard, was appointed President-for-Life of the Republic of Haiti. After Christophe committed suicide in 1820, Boyer promulgates the Republican Constitution in Christophe's northern state. This resulted in the unification of northern and southern Haiti. In 1822, Boyer arrives in Santo Domingo and declares control over the entire island of Hispaniola. Under Boyer, King Charles X of France signs an ordinance which conditionally recognizes Haiti's independence and imposes a 150 million franc indemnity on the Haitian government. This debt plagued Haiti's economy for generations. in 1843, President Boyer was overthrown and fled to Paris in exile.[10] The 1843 Constitution was established and Charles Riviere-Hérard was appointed President of Haiti. Under Riviere-Hèrard, the Dominican Republic declared its independence from Haiti.[11]

In 1915, the United States Marines, led by Admiral William B. Caperton, entered Port-au-Prince and began the United States occupation of Haiti. The U.S. took over the collection of revenues and banks in Haiti for 19 years. American forces withdraw from Haiti in 1934 marking the end of the U.S. occupation.[12] In 1957, François Duvalier, also known as "Papa Doc", was elected President of Haiti. In 1964, he declared himself president for life and established that his son, Jean-Claude Duvalier, known as "Baby Doc", would succeed him. During their regime, opposition to the government was not tolerated; thus, the Duvaliers used violence and terror to suppress the masses, killing about 30,000 Haitians. Finally, in 1986, a series of uprisings forced Baby Doc to flee Haiti for France. The Duvalier family stole millions of dollars during their administration, leaving Haiti in extreme debt today.[13]

Haiti is officially a semi-presidential republic, although it is often claimed to be authoritarian in practice. Suffrage is universal, for adults over 18.

The constitution was modeled after those of the United States and of France. It was approved in March 1987, but it was completely suspended from June 1988 to March 1989 and was only fully reinstated in October 1994. 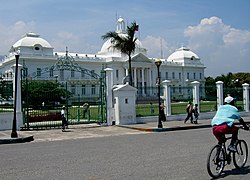 Presidential Palace in Port-au-Prince as seen before it was destroyed in the 2010 Haiti earthquake.

The president is the head of state and elected by popular vote every five years for a five-year term, and may not serve consecutive terms.[14] The last presidential election was held on 20 November 2016.[14] The current president is Jovenel Moïse.

The president is assisted by the prime minister and his cabinet, which must be ratified by the National Assembly.

Haiti's cabinet is led by the Prime Minister, and includes other ministers.

The prime minister, the head of government, is appointed by the president and ratified by the National Assembly. He appoints the Ministers and Secretaries of State and goes before the National Assembly to obtain a vote of confidence for his declaration of general policy. The Prime Minister enforces the laws and, along with the President, is responsible for national defense.

The ministries of the Haitian government are:[15]

The bicameral National Assembly of Haiti (Assemblée Nationale) consists of the Chamber of Deputies (Chambre des Députés) and the Senate (Sénat). The Chamber of Deputies has ninety-nine members, who are elected by popular vote for four-year terms. The Senate consists of thirty members elected by popular vote to serve six-year terms, with one third elected every two years.

Prior to a 2002 territorial law which created a tenth department, the Chamber of Deputies had eighty three seats and the Senate had twenty-seven.

The legal system is based on the Roman civil law system. Haiti accepts compulsory jurisdiction of the International Court of Justice. There is a Supreme Court (Cour de Cassation), assisted by local and civil courts at a communal level.

The Chief Justice of the Supreme Court, is in line to succeed the President in case of death or resignation, according to the 1987 Constitution of Haiti.

The departments are further divided into 41 arrondissements, and 133 communes, which serve as second- and third-level administrative divisions.

Retrieved from "https://en.wikipedia.org/w/index.php?title=Government_of_Haiti&oldid=926210778"
Categories:
Hidden categories:
The article is a derivative under the Creative Commons Attribution-ShareAlike License. A link to the original article can be found here and attribution parties here. By using this site, you agree to the Terms of Use. Gpedia Ⓡ is a registered trademark of the Cyberajah Pty Ltd.