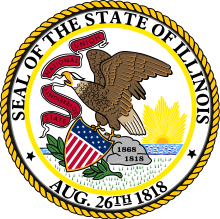 The Government of Illinois, under the state’s constitution, has three branches of government: Executive, Legislative, and Judicial. The State's executive branch is split into several statewide elected offices, with the Governor as chief executive and head of state, and has numerous departments, agencies, boards and commissions. Legislative functions are granted to the General Assembly, a bicameral body consisting of the 118-member House of Representatives and the 59-member Senate. The judiciary is composed of the Supreme Court of Illinois and lower courts.

The government of Illinois has numerous departments, agencies, boards and commissions, but the code departments, so called because they're established by the Civil Administrative Code of Illinois, provide most of the state's services:[1][3]

Regulations are codified in the Illinois Administrative Code.[4] The Illinois Register is the weekly publication containing proposed and adopted rules.[4]

The State Senate Chamber of the Illinois State Capitol in Springfield

The Illinois General Assembly is the state legislature, composed of the 118-member Illinois House of Representatives and the 59-member Illinois Senate. The members of the General Assembly are elected at the beginning of each even-numbered year. Representatives elect from their chamber a Speaker and Speaker pro tempore, and senators elect from the chamber a President of the Senate.

The Governor has different types of veto like a full veto, reduction veto, and amendatory veto, but the General Assembly has the power to override gubernatorial vetoes through a three-fifths majority vote of each chamber. The General Assembly's session laws are published in the official Laws of Illinois.[5][6] The Illinois Compiled Statutes (ILCS) are the codified statutes of a general and permanent nature.[4][6] 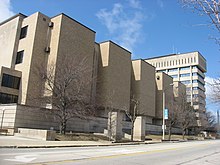 The Lake County Courthouse in Waukegan

As of 2014[update] none of the major constitutional officers in Illinois designated Springfield as their primary residence. Most cabinet officers and all major constitutional officers conduct most of their business in Chicago. A former director of the Southern Illinois University Paul Simon Institute for Public Affairs, Mike Lawrence, stated that many of the elected officials in Illinois "spend so little time in Springfield".[9] In 2012 St. Louis Post-Dispatch columnist Pat Gauen argued that "in the reality of Illinois politics, [Springfield] shares de facto capital status with Chicago."[8] Gauen noted that then-Governor Pat Quinn was a Chicago resident who spent only 68 days and 40 nights in Springfield from March 2011 to March 2012, per his official schedule. Gauen added that state attorney general Lisa Madigan, state House speaker Michael Madigan, House minority leader Tom Cross, state Senate president John Cullerton, Senate minority leader Christine Radogno, state Comptroller Judy Baar Topinka, and state Treasurer Dan Rutherford, all lived in the Chicago metropolitan area and worked in the James R. Thompson Center in Chicago. According to Gauen, "Everybody who's anybody in Illinois government has an office in Chicago."[8] University of Illinois researcher and former member of the Illinois legislature Jim Nowlan stated "It’s almost like Chicago is becoming the shadow capital of Illinois" and that "Springfield is almost become a hinterland outpost."[9] Lawrence criticized the fact that state officials spent little time in Springfield since it estranged them from and devalued Illinois state employees based in that city.[9]

According to Gauen, "Illinois seems rather unlikely to move its official capital to Chicago".[8] 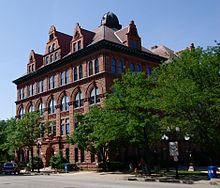 The administrative divisions of Illinois are counties, townships, precincts, cities, towns, villages, and special-purpose districts.[11] Illinois has more units of local government than any other state—over 8,000 in all. The basic subdivision of Illinois are the 102 counties.[12] 85 of the 102 counties are in turn divided into townships and precincts.[12][13] Municipal governments are the cities, villages, and incorporated towns.[12] Localities possess "home rule", which allows them to govern themselves to a certain extent.[14] Illinois counties, townships, cities, and villages may promulgate local ordinances.[15] Illinois also has several types of school districts (including the Chicago Public Schools and the Illinois Community College System) and additional units of government that oversee many other functions.

Retrieved from "https://en.wikipedia.org/w/index.php?title=Government_of_Illinois&oldid=953620025"
Categories:
Hidden categories:
The article is a derivative under the Creative Commons Attribution-ShareAlike License. A link to the original article can be found here and attribution parties here. By using this site, you agree to the Terms of Use. Gpedia Ⓡ is a registered trademark of the Cyberajah Pty Ltd.