Greenwich Pizza, founded in 1971 by Cresida Tueres, is a pizza and pasta chain in the Philippines. 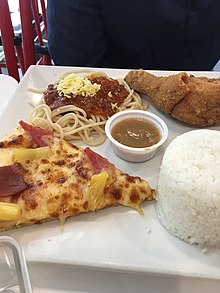 In 1994, Jollibee Foods Corporation acquired 80% of Greenwich shares.[1] Then, in 2006, Jollibee bought out the remaining shares of its partners in Greenwich for PHP384 million, giving rise to a new company known as the Greenwich Pizza Corporation. The franchise experienced rapid expansion from the original 50 stores in 1994 to over 240 stores with an annual revenue of over PHP4 billion in 2005. Expanding further through 2011, the corporation had opened over 330 stores.[2]

Retrieved from "https://en.wikipedia.org/w/index.php?title=Greenwich_Pizza&oldid=941098890"
Categories:
Hidden categories:
The article is a derivative under the Creative Commons Attribution-ShareAlike License. A link to the original article can be found here and attribution parties here. By using this site, you agree to the Terms of Use. Gpedia Ⓡ is a registered trademark of the Cyberajah Pty Ltd.