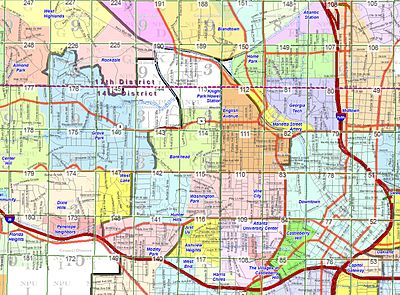 Grove Park is a northwest Atlanta, inside-the-perimeter neighborhood bounded by:

Grove Park was named for Dr. Edwin Wiley Grove, president of the Grove Park Development Company, a pharmaceutical magnate who also built Atkins Park near Virginia-Highland in northeast Atlanta, and many Asheville, North Carolina hotels including the Grove Park Inn. Grove Park was developed in the 1920s and 1930s by various developers, but primarily by the Grove Park Development Company. Mr. Grove died in Asheville NC on January 27,1927. He is buried in Paris TN , the town where he first invented his Grove's Chill Tonic with Fred Seely. The community was initially known as Fortified Hills, a name stemming from the Civil War. Grove named the streets for his second wife, Gertrude, his daughter Evelyn (from his first wife, Mary Louisa Moore Grove., and his son, Edwin begat from Gertrude.. Other street names are believed to have been inspired by his grandchildren: Matilda, Hortense, Emily, Elizabeth, Francis, Eleanor, Florence, Margaret, and Eugenia. Many of the side streets created in the 1930s, 1940s and 1950s are wide, tree-lined avenues with well-tended frame cottages, brick Tudors and ranches.

Grove Park and Center Hill were both developed during the early part of the 20th century. Prior to 1960 Grove Park and Center Hill were all-white communities. African-Americans began to move into these areas during the 1960s, primarily as an offshoot of growth in the Collier Heights neighborhood. Collier Heights was developed in earnest in the late 1950s and early 1960s as a public-private effort with African Americans handling most of the "hammers and cash." The City of Atlanta published its "Neighborhood Plan for Collier Heights" in 1961. The neighborhood would accommodate 7,000 residents and help solve the shortage of quality homes for African Americans.

Donald Lee Hollowell Parkway, one of the major corridors in Northwest Atlanta, was in its splendor during the 1960s, and the area was stable until the early 1970s when suburban growth began to drain the area's vitality. As a result, many longtime businesses closed and were replaced by low-rent business; and as population decreased the area began to deteriorate. In fact, through the turn of the 21st century, the entire area witnessed a steady decline in population, property conditions and the local economy.

However, conditions in the area have changed over the past few years as the current trend towards in-town living gains popularity. Neighborhoods throughout the City and especially Northwest Atlanta are experiencing a resurgence of development including new infill residential units and subdivisions as well as major renovations. Grove Park and the Donald Lee Hollowell Parkway Corridor are poised to experience some of this resurgence. The Grove Park area has been dramatically affected by the nation's foreclosure crisis. However, real estate investors expect the proposed development plans to spur the neighborhood's revitalization. In 2018, Mark Teixeira and a development team announced plans to build a 70 acres (28 hectares) mixed-use development in the neighborhood called Quarry Yards, adjacent to the planned Westside Reservoir Park.[1]

Grove Park is the original home of Andre 3000, and the Cleveland Browns Pro-Bowl halfback Jamal Lewis.

Grove Park falls on the western edge of the BeltLine. The northeastern boundary of Grove Park is the former Bellwood Quarry - site of the future Westside Park, which will be twice the size Piedmont Park as proposed. Amenities will include tournament-quality baseball fields, a skate park and rink, hiking and mountain biking trails, an amphitheatre which takes advantages of skyline views, a dog park, community gardens and many others attractions. Additionally the neighborhood features several small pocket parks and boulevard parks including Edwin Place Park, Matilda Place Park, North and South Evelyn Place Park, and Elinor Place Park. Finally the neighborhood namesake park Grove Park itself.

Grove Park is also home to the currently under construction Proctor Street Greenway Trail. The multi-purpose trail will string together more than 400 acres of greenspace, spanning from Maddox Park along the Beltline Westside Trail all the way to the Chattahoochee River. The first phase of the project includes more than two miles of trails, connecting Bankhead MARTA Station to the existing River Park Trail, passing through the planned Westside Quarry Park. Ultimately, plans call for work on the entire trail to be completed in six segments, according to a master plan finished in April 2017.[3]

Retrieved from "https://en.wikipedia.org/w/index.php?title=Grove_Park,_Atlanta&oldid=975692221"
Categories:
Hidden categories:
The article is a derivative under the Creative Commons Attribution-ShareAlike License. A link to the original article can be found here and attribution parties here. By using this site, you agree to the Terms of Use. Gpedia Ⓡ is a registered trademark of the Cyberajah Pty Ltd.