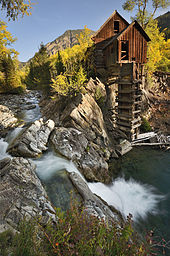 The historic Crystal Mill, built in 1893

Gunnison County is the fifth-most extensive of the 64 counties in the U.S. state of Colorado. As of the 2010 census, the population was 15,324.[1] The county seat is Gunnison.[2] The county was named for John W. Gunnison, a United States Army officer and captain in the Army Topographical Engineers, who surveyed for the transcontinental railroad in 1853.

Archeological studies have dated the Ute people's appearance in the Uncompahgre region of Colorado as early as 1150 A.D. Possibilities exist that they are descendants of an earlier people living in the area as far back as 1500 B.C.[3] They were a nomadic race of dark skin moving about the Western Slope of Colorado in the various parts of the year.[4] In the early to mid-1600s the Spaniards of New Mexico introduced the horse which changed their patterns of hunting taking them across the divide to the eastern slopes and into conflict with the Plains Indians which soon became their bitter enemies.[5]

The first recorded expedition of Western Colorado wilderness was led by Don Juan Rivera in 1765. In 1776, two Spanish priests, Fathers Escalante and Domínguez, led a party into the area around Montrose and Paonia.[6]

The 1830s brought the mountainmen into the area to trap beaver. An old cabin located on Cochetopa Creek discovered by Sidney Jocknick was most likely built between 1830 and 1840 and a rude fort was discovered on a tributary of Tomichi Creek bore signs of a conflict.[7]

In 1853, Capt. John W. Gunnison surveyed the area for the transcontinental railroad route.[8]

In 1858 gold was discovered near Denver bringing the white man across the divide into the western slope in search of the precious metal. In 1859 a party settled on Texas Gulch in Union Park.[9]

Placer gold was found at Washington Gulch in 1861 as part of the Colorado Gold Rush.[10]

In 1861 the Territory of Colorado was organized. The territorial governor was made ex officio Superintentant of Indian Affairs. A conference on October 1, 1863 established a boundary line for a reservation.[11] This treaty averted a possible dangerous situation by giving the Utes some cattle and sheep, a blacksmith and 20,000 dollars a year in goods and provisions. The government failed to fulfill any these obligations straining the relations further.[12] The treaty of 1868 recognized Chief Ouray as the sole spokesman for seven tribes of the Ute People. He held this power over his people through diplomacy and understanding.[13]

The Los Pinos Agency was developed through the Treaties of 1868 and 1873. The first agent was 2nd Lieutenant Calvin T. Speer. In 1871 a cow camp was started near the present site of Gunnison with James P. Kelley in charge. In this year, Jabez Nelson Trask, a Harvard grad, relieved Speer as agent upon orders from Governor Edward M. McCook.[14] In 1872 Trask was replaced by Charles Adams.

In 1875 orders from Washington to move the agency to the Uncomphgre Valley were completed in November.[15]

In 1876 Colorado entered the Union and Gunnison County was formed. 1879 was a year of expansion due to the miners, speculators and adventurers seeking wealth. The cattle industry was established by 1880. The short growing season was not conducive to farming and the ranchers had to level fields and construct irrigation ditches to water the fields for hay.

Taylor Park Reservoir is a man-made lake created by the Taylor Dam constructed in 1934 with appropriations of 2,725,000 dollars.[18] 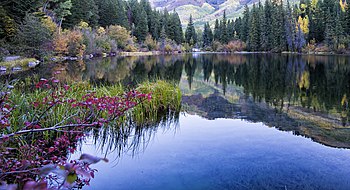 For most of the 20th century, except 1964, Gunnison County was a Republican stronghold. However, beginning in the late 1980s, it began trending more Democratic, as Bill Clinton won the county both times in 1992 and 1996. The county gave a 43.2% plurality to George W. Bush in the 2000 election, and has voted for the Democratic candidate in every election since. 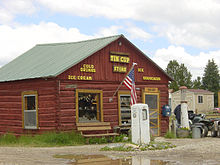 In 2007, the science fiction horror film Aliens vs. Predator: Requiem was set in and around the town of Gunnison.

Retrieved from "https://en.wikipedia.org/w/index.php?title=Gunnison_County,_Colorado&oldid=964199923"
Categories:
Hidden categories:
The article is a derivative under the Creative Commons Attribution-ShareAlike License. A link to the original article can be found here and attribution parties here. By using this site, you agree to the Terms of Use. Gpedia Ⓡ is a registered trademark of the Cyberajah Pty Ltd.