Jump to navigation Jump to search
For the hall of columns in Hypostyle, Karnak, Egypt, see Great Hypostyle Hall. 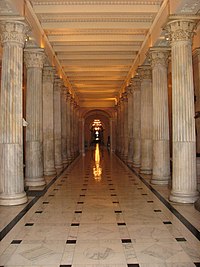 The Hall of Columns is a more than 100-foot-long (30 m) hallway lined with twenty-eight fluted columns in the south wing extension of the United States Capitol in Washington, D.C. It is also the gallery for eighteen statues of the National Statuary Hall Collection.

The "Hall of Columns" emerged as part of the necessitated expansion of the north and south Capitol wings in the mid-nineteenth century due to the increased numbers of elected Senators and Representatives (also known as "congressmen") with the continued expansion of the United States westward and admission of more states to the Union from their previous status as Territories, now standing of 34. The original chambers of the U.S. House of Representatives and the U.S. Senate had become too crowded with the additional senators and representatives. Under the guidance of the then fourth Architect of the Capitol Thomas U. Walter, plans were drawn up to expand the two sides ("wings") in the previous original central block of the Capitol (also location of the rotunda and low copper-covered dome above it from the original Capitol architects: William Thornton, followed by Benjamin Henry Latrobe and Charles Bulfinch architectural designs beginning in 1793) and build new, larger chambers with additional rooms and offices for both houses.[1]

Capital of one of the columns.

Built directly beneath the Chamber of the House of Representatives, construction had begun sometime before 1855, with the implementation of a cast iron ceiling, forged in Baltimore by the well known local foundry Hayward, Bartlett, and Co.[2] The walls, themselves, were made with an imitation marble known as scagliola. The floor was set with imported encaustic Minton tiles from England (the same still found in the Brumidi Corridors, designed by artist Constantino Brumidi), but were eventually replaced in the 1920s with a floor of Alabama and New York marble. By 1856, all the columns, made from marble quarried from Lee, Massachusetts, were finished and set in place.[2]

The capitals of the columns are based on "Corinthian" styled columns, but adjusted to reflect an American style with the usage of thistles and native tobacco leaves in the cast iron.[2]

Retrieved from "https://en.wikipedia.org/w/index.php?title=Hall_of_Columns&oldid=897362326"
Categories:
Hidden categories:
The article is a derivative under the Creative Commons Attribution-ShareAlike License. A link to the original article can be found here and attribution parties here. By using this site, you agree to the Terms of Use. Gpedia Ⓡ is a registered trademark of the Cyberajah Pty Ltd.