Jump to navigation Jump to search
Not to be confused with Hamilton, New York or Hamilton (village), New York.
County in New York

Hamilton County is a county in the U.S. state of New York. As of the 2010 census, the population was 4,836,[1] making it the least populous county in New York. Nearly the size of Delaware, but with a population of only 4,416,[2] it is the least densely populated county east of the Mississippi river. Its county seat is Lake Pleasant.[3] The county is named after Alexander Hamilton,[4] the only member of the New York State delegation who signed the United States Constitution in 1787 and later the first United States Secretary of the Treasury. The county was created in 1816 and organized in 1847.[5]

For the history of Hamilton County prior to 1816, see Montgomery County, New York.

On April 12, 1816, Hamilton County was created by partitioning 1,800 square miles (4,700 km2) from Montgomery County,[6] but due to low population it remained unorganized and administered from Montgomery County, N.Y. until it was recognized as sufficiently prepared for self-government on January 1, 1838.[7] The organization process was completed by summer 1847.[8]

On April 6, 1860, Fulton County was partitioned, with 10 square miles (26 km2) of land in Sacandaga Park transferred to Hamilton County.[9] On May 24, 1915, land was swapped between Hamilton and Essex counties, with Hamilton ceding Fishing Brook Mountain for Indian Lake. Hamilton gained an additional 20 square miles (52 km2), whereas Essex County lost 30 square miles (78 km2). This left Hamilton with its present size of 1,830 square miles (4,700 km2).[10]

The former town of Gilman was dissolved in 1860. The original county seat was Sageville, now part of Lake Pleasant. 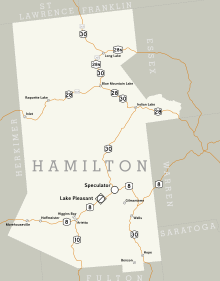 Since World War I Hamilton County has been the most consistently Republican of New York. Since Woodrow Wilson carried the county in 1916,[18] the Republican candidate has lost only once, when Barry Goldwater in 1964 failed to win a single county in the state. The county was Goldwater's third strongest in the state however.[19] In the 2008 U.S. presidential election, John McCain carried Hamilton County by a 26.9% margin over Barack Obama, with Obama winning statewide by a virtually equal margin over McCain; Republican nominee Mitt Romney won the county over President Obama in the 2012 election, too.[20] Hamilton gave McCain the highest margin of victory in the state.[21]

It was the only county won by Howard Mills over incumbent Chuck Schumer in the 2004 U.S. Senate election. It also voted for John Faso over Eliot Spitzer for governor in 2006, and for John Spencer 55.5%-42.1% over incumbent Hillary Clinton for the U.S. Senate in 2006. It was one of only a handful of counties outside Western New York to have voted for Carl Paladino over eventual winner Andrew Cuomo for Governor in 2010.

Democrat Kirsten Gillibrand, however, won the county in her bid to be elected for a full term to the U.S. Senate in 2012.[22]

The following public use airports are located in the county:[23]

Retrieved from "https://en.wikipedia.org/w/index.php?title=Hamilton_County,_New_York&oldid=967294813"
Categories:
Hidden categories:
The article is a derivative under the Creative Commons Attribution-ShareAlike License. A link to the original article can be found here and attribution parties here. By using this site, you agree to the Terms of Use. Gpedia Ⓡ is a registered trademark of the Cyberajah Pty Ltd.