Harriet is a 2019 American biographical film about abolitionist Harriet Tubman. Directed by Kasi Lemmons, who wrote the screenplay with Gregory Allen Howard, it stars Cynthia Erivo as Tubman, with Leslie Odom Jr., Joe Alwyn, and Janelle Monáe in supporting roles.

A biography about Harriet Tubman had been in the works for years, with several actresses, including Viola Davis, rumored to star. Erivo was cast in February 2017, and much of the cast and crew joined the following year. Filming took place in Virginia from October to December 2018.

Harriet had its world premiere at the Toronto International Film Festival on September 10, 2019, and was theatrically released in the United States on November 1, 2019, by Focus Features. It received generally favorable reviews from critics, who praised Erivo's performance and found the film sincere but formulaic. For her performance in the film, Erivo received nominations at the Academy Awards, Golden Globes, and the Screen Actors Guild. And for writing the song, "Stand Up", Erivo and Joshuah Brian Campbell received Oscar and Golden Globe nominations.

The film opens in 1840s Maryland, a slave state, Araminta "Minty" Ross is newly married to a freedman, John Tubman. Minty is still a slave herself on the Brodess farm, along with her mother and sister, while two other sisters had been sold to another slave owner in the South. Her father, also a freedman, approaches Mr. Brodess with evidence that Brodess' ancestor had agreed to free Minty's mother, Harriet "Rit" Ross, when she was 45, and that she and her children legally should have been free since Rit turned 45 twelve years before. Mr. Brodess insists they will always be slaves, and tears up the letter from the lawyer who had analyzed the will. In despair, Minty prays for God to take away Mr. Brodess, whom she decries as evil. Brodess's adult son Gideon finds Minty praying, and castigates her, saying God does not care about the prayers of slaves. Mr. Brodess dies shortly afterward, and Gideon offers Minty for sale. Minty, who suffers "spells" since being struck in the head as a girl, has a vision of herself escaping to freedom, and she decides to run.

John offers to run with Minty, but she leaves him behind, fearing that he would lose his own freedom if caught escaping with her. Gideon pursues her to a bridge over a river, where he promises not to sell her, but she jumps anyway, saying she will live free or die. Minty is presumed drowned but successfully makes it to Philadelphia via the Underground Railroad, assisted by Quakers and other abolitionists. In Philadelphia, she meets Marie Buchanon, the fashionable daughter of a freed slave who was born free and is now a boarding-house proprietor, and William Still, an abolitionist and writer. William encourages her to take a new free name, and she calls herself Harriet after her mother. After a few months in Philadelphia, against the advice of Marie and William, Harriet decides to go back for John. She successfully makes it to John's homestead only to find he has remarried, believing she was dead, and is expecting a baby with his new wife.

Devastated, Harriet decides to free her family, but her sister refuses to leave her two children. Harriet continues to return, guiding dozens of slaves to freedom as a conductor on the Underground Railroad, and a myth begins to grow about the person responsible, who is dubbed Moses. However, when the Fugitive Slave Act passes, the escaped slaves are in jeopardy of being brought back even from free states. Gideon is livid when he discovers that she is "Moses," especially as his fellow slave owners demand he compensate them for Harriet freeing their own slaves. Gideon pursues her to Philadelphia along with the slave hunter Bigger Long, who kills Marie. Harriet flees to Canada.

In Canada, Harriet insists that the Underground Railroad must continue. She continues to help runaway slaves flee all the way to Canada, though her sister dies before she can save her. Over time, the Brodess farm falls into financial ruin. Mrs. Brodess vows to catch Harriet, using her sister's children as bait, but Harriet's team overwhelms Gideon's siblings and retrieves the last remaining Brodess slaves. In a final confrontation, Gideon shoots Bigger Long to death, but then Harriet traps him. She lets Gideon live, prophesying that he would die on that battlefield, fighting for the "Lost Cause" and the sin of slavery. Telling him that her people would be free, she takes his horse and rides away.

In the last scenes of the film, Harriet is seen caring for her family, and leading 150 black soldiers into the Combahee River Raid, freeing hundreds of slaves.

An epilogue at the end of the film describes some of her accomplishments: She personally freed more than 70 slaves on the Underground Railroad and returned as a Union spy during the Civil War, leading 150 black soldiers, who freed over 750 slaves. She died at the approximate age of 91 and her last words were "I go to prepare a place for you".

In 2015, Viola Davis was set to star in and produce a Harriet Tubman biopic; however, it never came to fruition.[6] Development on a new film began in May 2016.[7] In February 2017, Cynthia Erivo was cast as Tubman, with Seith Mann then set to direct, from a screenplay by Gregory Allen Howard.[8]

Further development on the film was announced in September 2018, with Focus Features set as the new distributor, Kasi Lemmons attached as director, and Leslie Odom Jr., Joe Alwyn, Jennifer Nettles, and Clarke Peters, and others, added to the cast.[9][10] Lemmons received co-writer credit with Allen on the final script, and Allen also had the film's "story by" credit. In October, Janelle Monáe was announced as one of several actors newly added to the film, with filming beginning on October 8, 2018 and lasting through December.[11][12][13]

Harriet had its world premiere at the Toronto International Film Festival on September 10.[1] It was theatrically released in the United States on November 1, 2019.[2][3] Its release for Blu-ray and DVD sales took place on January 14, 2020.[3] 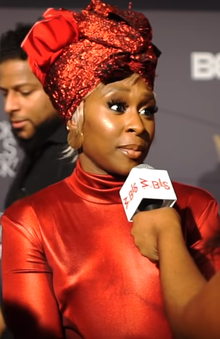 On Rotten Tomatoes, the film holds an approval rating of 74% based on 216 reviews, with an average rating of 6.62/10. The website's critics' consensus reads, "Harriet serves as a sincere tribute to a pivotal figure in American history—albeit one undermined by its frustratingly formulaic approach."[20] Metacritic assigned the film a weighted average score of 66 out of 100, based on 41 critics, indicating "generally favorable reviews."[21] Audiences polled by CinemaScore gave the film a rare grade of "A+", while those at PostTrak gave it an average 4.5 out of 5 stars and a 69% "definite recommend."[17]

Reviewing for The New York Observer, Rex Reed wrote: "With enough terror to satisfy modern audiences and enough underplayed plot movement to save it from conventional biopic trajectory, Harriet holds interest and invites respect. It is still not the great Civil War epic it could have been, but it’s solid enough to work, and Cynthia Erivo's valiant and committed performance is a wonderful achievement."[22] Richard Roeper gave the film three out of four stars in his review for the Chicago Sun-Times, applauding Erivo's "convincing" and "powerful" acting as well as Lemmons' approach to the story. He wrote: "The crackling historical fiction frames [Tubman's] harrowing rescue missions in fast-paced, quick-cut style."[23]

Some reviewers were less positive. Eric Kohn of IndieWire gave the film a "B–", writing that "Harriet doesn’t attempt to reinvent the biopic, relying instead on a poignant turn by rising screen talent Cynthia Erivo as its soulful centerpiece, against the gorgeous backdrop of John Toll's cinematography and Terence Blanchard's euphoric score. As a sentimental tribute, it hardly transcends expectations—but Erivo's performance injects a palpable urgency to the material that makes up for missed time."[24] In Variety, Owen Gleiberman wrote, "Cynthia Erivo plays the escaped slave Harriet Tubman with a mournful fury, but the rest of Kasi Lemmons' biopic is more dutiful than inspired."[25]

Retrieved from "https://en.wikipedia.org/w/index.php?title=Harriet_(film)&oldid=971797812"
Categories:
Hidden categories:
The article is a derivative under the Creative Commons Attribution-ShareAlike License. A link to the original article can be found here and attribution parties here. By using this site, you agree to the Terms of Use. Gpedia Ⓡ is a registered trademark of the Cyberajah Pty Ltd.