Henry Highland Garnet (December 23, 1815 – February 13, 1882) was an African-American abolitionist, minister, educator and orator. Having escaped with his family as a child from slavery in Maryland, he grew up in New York City. He was educated at the African Free School and other institutions, and became an advocate of militant abolitionism. He became a minister and based his drive for abolitionism in religion.

Garnet was a prominent member of the movement that led beyond moral suasion toward more political action. Renowned for his skills as a public speaker, he urged black Americans to take action and claim their own destinies. For a period, he supported emigration of American free blacks to Mexico, Liberia, or the West Indies, but the American Civil War ended that effort. In 1841 he married abolitionist Julia Williams and they had a family. They moved to Jamaica in 1852 to serve as missionaries and educators. After the war, the couple worked in Washington, DC.

On Sunday, February 12, 1865, he delivered a sermon in the U.S. House of Representatives, "the first colored man who has on any occasion spoken in our National Capital,"[1] on the occasion of Congress's passage on January 31 of the Thirteenth Amendment, ending slavery. 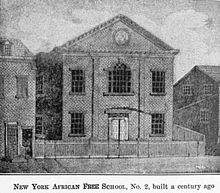 Henry Garnet was born into slavery in Chesterville (then New Market), Kent County, Maryland, on December 23, 1815. "[H]is grandfather was an African chief and warrior, and in a tribal fight he was captured and sold to slave-traders who brought him to this continent where he was owned by Colonel William Spencer."[2] According to James McCune Smith, Garnet's father was George Trusty and his enslaved mother was "a woman of extraordinary energy."[3] In 1824, the family, which included a total of 11 members, secured permission to attend a funeral, and from there they all escaped in a covered wagon, via Wilmington, Delaware, where they were helped by the Quaker and Underground Railroad stationmaster Thomas Garrett.

When Garnet was ten years old, his family reunited and moved to New York City, where from 1826 through 1833, Garnet attended the African Free School, While in school, Garnet began his career in abolitionism. His classmates at the African Free School included Charles L. Reason, George T. Downing, and Ira Aldridge.[2] He continued his studies at the Phoenix High School for Colored Youth.

In 1834, Garnet, William H. Day, and David Ruggles established the all-male Garrison Literary and Benevolent Association; "Garrison" is a reference to the famous abolitionist Wm. Lloyd Garrison, and indicates the character of the association. It garnered mass support among whites, but the club ultimately had to move due to racist feelings.

In 1835, Garnet enrolled at the new Noyes Academy in Canaan, New Hampshire, but anti-abolitionists soon destroyed the school building and forced the Negro students out of town. He completed his education at the Oneida Institute in Whitesboro, New York, which had recently begun admitting all races. Here he was acclaimed for his wit, brilliance, and rhetorical skills. The year after graduation in 1839, he injured his knee playing sports. It never recovered, and his lower leg had to be amputated in 1841.[2]

In 1841 Garnet married Julia Williams, whom he had met as a fellow student at the Noyes Academy. She had also completed her education at the Oneida Institute. Together they had three children, only one of whom survived to adulthood.[2]

Garnet served as pastor of the Fifteenth Street Presbyterian Church in Washington, DC, from 1864-1866. The church is shown here as it was in about 1899. 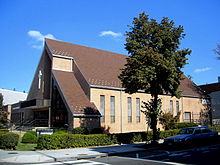 In 1839, Garnet moved with his family to Troy, New York, where he taught school and studied theology. In 1842, Garnet became pastor of the Liberty Street Presbyterian church, a position he held for six years. With his friend William G. Allen, also an Oneida alumnus, he published the National Watchman, an abolitionist newspaper. Closely identifying with the church, Garnet supported the temperance movement and became a strong advocate of political antislavery.[2][further explanation needed] What is political antislavery?

He later returned to New York City, where he joined the American Anti-Slavery Society and frequently spoke at abolitionist conferences. One of his most famous speeches, "Call to Rebellion," was delivered August 1843 to the National Negro Convention in Buffalo, New York. "Upon the conclusion of the Negro national convention of 1843, Garnet led a state convention of Negroes assembled in Rochester."[4]

These conventions by black activists were called to work for abolition and equal rights. Garnet said that slaves should act for themselves to achieve total emancipation. He promoted an armed rebellion as the most effective way to end slavery. Frederick Douglass and William Lloyd Garrison, along with many other abolitionists both black and white, thought Garnet's ideas were too radical and could damage the cause by arousing too much fear and resistance among whites. Garnet supported the Liberty Party, a party of reform that was eventually absorbed into the Republican Party. Garnet disagreed with the later Republicans.

Women's participation in the abolitionist movement was controversial and resulted in a split in the American Anti-Slavery Society. Arthur Tappan, Lewis Tappan, "and a group of black ministers, including Henry Highland Garnet" founded the American and Foreign Anti-Slavery Society (AFAS).[5] It "was committed to political abolitionism and to male leadership at the top levels."[6]

By 1849 Garnet began to support emigration of blacks to Mexico, Liberia, or the West Indies, where he thought they would have more opportunities. In support of this, he founded the African Civilization Society. Similar to the British African Aid Society, it sought to establish a West African colony in Yoruba (present-day Nigeria). Garnet advocated a kind of black nationalism in the United States, which included establishing separate sections of the nation to be black colonies. Other prominent members of this movement included minister Daniel Payne, J. Sella Martin, Rufus L. Perry, Henry M. Wilson, and Amos N. Freeman.[7]

In 1850, Garnet went to Great Britain at the invitation of Anna Richardson of the free produce movement, which opposed slavery by rejecting the use of products produced by slave labor.[8] He was a popular lecturer, and spent two and a half years lecturing. At first, the work separated Garnet from his family, who remained back in New York State. While he was abroad, his seven-year-old son, James Crummell Garnet, died on March 1, 1851 while Garnet was abroad. His wife Julia, his young son Henry, and their adopted daughter Stella Weims joined Garnet in Great Britain later that year.[9]

In 1852 Garnet was sent to Kingston, Jamaica, as a missionary. He and his family spent three years there; his wife Julia Garnet led an industrial school for girls. Garnet had health problems that led to the family returning to the United States.

After John Brown's raid on Harpers Ferry of 1859, Garnett in a sermon "declared [it] to be the duty of every man who loved the cause of freedom to declare that the Harper's Ferry movement was right, and that any one who would not say so boldly had much better say nothing at all."[10]

When the American Civil War started, Garnet's hopes ended for emigration as a solution for American blacks. In the three-day New York draft riots of July 1863, mobs attacked blacks and black-owned buildings. Garnet and his family escaped attack because his daughter quickly chopped their nameplate off their door before the mobs found them.[11] He organized a committee for sick soldiers and served as almoner to the New York Benevolent Society for victims of the mob.[2]

When the federal government approved creating black units, Garnet helped with recruiting United States Colored Troops. He moved with his family to Washington, DC, so that he could support the black soldiers and the war effort. He preached to many of them while serving as pastor of the prominent Liberty (Fifteenth) Street Presbyterian Church from 1864 until 1866. During this time, Garnet was the first black minister to preach to the US House of Representatives, addressing them on 12 February 1865 about the end of slavery.

He remained politically active upon his return to New York, and was known to provide support to the Cuban independence movement.[12] In 1878, while living at 102 West 3rd Street [13], in a neighborhood often referred to as Little Africa, Garnet hosted a reception for Cuban revolutionary leader Antonio Maceo.[14]

Garnet's last wish was to go, even for a few weeks, to Liberia, where his daughter Mary Garnet Barboza was,[16] and to die there. He was appointed as the U.S. Minister (ambassador) to Liberia, where he arrived on December 28, 1881,[2] and died February 13 of malaria.[16] Garnet was given a state funeral by the Liberian government. As described by Alexander Crummell:

[T]ey buried him like a prince, this princely man, with the blood of a long line of chieftains in his veins, in the soil of his fathers. The entire military forces of the capital of the republic turned out to render a last tribute of respect and honor. The President and his cabinet, the ministry of every name, the president, professors and students of the college, large bodies of citizens from the river settlement, as well as the townsmen, attended his obsequies as mourners. A noble tribute was accorded him by Rev. E. W. Blyden, D. D., LL. D., one of the finest scholars and thinkers in the nation. Minute guns were fired at every footfall of the solemn procession.[2]

He was buried at Palm Grove Cemetery in Monrovia.[16]

Frederick Douglass, who had not been on speaking terms with Garnet for many years because of their differences,[further explanation needed] still mourned Garnet's passing and noted his achievements.[citation needed]

Retrieved from "https://en.wikipedia.org/w/index.php?title=Henry_Highland_Garnet&oldid=964793081"
Categories:
Hidden categories:
The article is a derivative under the Creative Commons Attribution-ShareAlike License. A link to the original article can be found here and attribution parties here. By using this site, you agree to the Terms of Use. Gpedia Ⓡ is a registered trademark of the Cyberajah Pty Ltd.