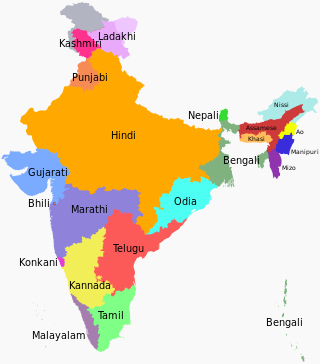 States and union territories of India by the most commonly spoken first language.[5][a]

The Hindi Belt or Hindi Heartland or Hindi Patti, is a linguistic region encompassing parts of northern, central, eastern and western India where Hindi (and the various languages/dialects grouped under it) is widely spoken.[6][7][8][9][10] Hindi belt is sometimes also used to refer to nine Indian states whose official language is Hindi and have a Hindi-speaking majority, namely Bihar, Chhattisgarh, Haryana, Himachal Pradesh, Jharkhand, Madhya Pradesh, Rajasthan, Uttarakhand, Uttar Pradesh and National Capital Territory of Delhi.[11][12][13][14] It is also referred as Hindi-Urdu belt by some Muslim writers.[15]

Hindi as a dialect continuum

Hindi is part of the Indo-Aryan dialect continuum that lies within the cultural Hindi Belt in the northern plains of India. Hindi in this broad sense is a linguistic rather than an ethnic concept.

This definition of Hindi is one of the ones used in the Indian census, and results in more than forty percent of Indians being reported to be speakers of Hindi, though Hindi-area respondents vary as to whether they call their language Hindi or use a local language name to distinguish their language from Hindi. As defined in the 1991 census, Hindi has a broad and a narrow sense. The name "Hindi" is thus ambiguous. Before being identified as a separate language Maithili was identified as a Hindi dialect. Many such languages still struggle for recognition.

The broad sense covers a number of Central, East-Central, Eastern, and Northern Zone languages, including the Bihari languages except Maithili, all the Rajasthani languages, and the Central Pahari languages.[10] This is an area bounded on the west by Punjabi and Sindhi; on the south by Gujarati, Marathi, and Odia; on the east by Maithili and Bengali; and on the north by Nepali, Kashmiri, and Tibetic languages. The varieties of this belt can be considered separate languages rather than dialects of a single language.

In the narrow sense, the Hindi languages proper, Hindi can be equated with the Central Zone Indic languages. These are conventionally divided into Western Hindi and Eastern Hindi. An even narrower definition of Hindi is that of the official language, Modern Standard Hindi or Manak Hindi, a standardised register of Hindustani, one of the varieties of Western Hindi. Standardised Hindustani—including both Manak Hindi and Urdu—is historically based on the Khariboli dialect of 17th-century Delhi.

Population data from 2011 Indian Census is as follows:

According to the 2001 Indian census,[16] 258 million people in India (25% of the population) regarded their native language to be "Hindi", however, including other Hindi dialects this figure becomes 422 million Hindi speakers (41% of the population). These figures do not count 52 million Indians who considered their mother tongue to be "Urdu". The numbers are also not directly comparable to the table above; for example, while independent estimates in 2001 counted 37 million speakers of Awadhi,[17] in the 2001 census only 2½ million of these identified their language as "Awadhi" rather than as "Hindi".

There have been demands to include Awadhi, Bhojpuri, Bundeli, Chhattisgarhi, Garwali, Kurmali, Magahi, Nagpuri, Rajasthani language in Eighth Schedule which are considered Hindi dialect.[18] Some academics oppose inclusion of Hindi dialects in the Eighth Schedule of the Constitution as full-fledged Indian languages. According to them recogniton of Hindi dialects as separate languages would deprive Hindi of millions of its speakers and eventually no Hindi will be left.[19][20]

Outside the Indian subcontinent

Much of the Hindi spoken outside of the subcontinent is quite distinct from the Indian standard language. Most Pakistani speakers, and some Muslim Indian speakers, call their version of Hindustani "Urdu" rather than "Hindi" or "Hindustani". Religious proponents both of Hindi and of Urdu often contend that they are two separate languages despite their mutual intelligibility.

The highly fertile, flat, alluvial Gangetic plain occupies the northern portion of the Hindi Heartland, the Vindhyas in Madhya Pradesh demarcate the southern boundary and the hills and dense forests of Jharkhand and Chhattisgarh lie in the east. The region has a predominantly subtropical climate, with cool winters, hot summers and moderate monsoons. The climate does vary with latitude somewhat, with winters getting cooler and rainfall decreasing. It can vary significantly with altitude, especially in Jharkhand and Chhattisgarh.

The Hindi Heartland supports about a third of India's population and occupies about a quarter of its geographical area. The population is concentrated along the fertile Ganges plain in the states of Uttar Pradesh, Madhya Pradesh, Chhattisgarh, Jharkhand and Bihar.

Although the vast majority of the population is rural, significant urban cities include Chandigarh, Panchkula, Delhi, Lucknow, Kanpur, Allahabad, Jaipur, Agra, Varanasi, Indore, Bhopal, Patna, Jamshedpur and Ranchi. The region hosts a diverse population, with various dialects of Hindi being spoken along with other Indian languages, and multi-religious population including Hindus, Muslims, Sikhs along with people from various castes and a significant tribal population. The geography is also varied, with the flat, alluvial Gangetic plain occupying the northern portion, the Vindhyas in Madhya Pradesh demarcating the southern boundary and the hills and dense forests of Jharkhand and Chhattisgarh separate the region from West Bengal and Odisha.

Over years political development in some of these states are dominated by caste based politics, but this has changed somewhat in recent years.[21] In 2019 election, 226 members from the Hindi belt states had been elected to the Lok Sabha.[22][23]

Retrieved from "https://en.wikipedia.org/w/index.php?title=Hindi_Belt&oldid=941555523"
Categories:
Hidden categories:
The article is a derivative under the Creative Commons Attribution-ShareAlike License. A link to the original article can be found here and attribution parties here. By using this site, you agree to the Terms of Use. Gpedia Ⓡ is a registered trademark of the Cyberajah Pty Ltd.