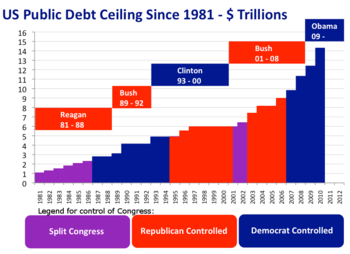 U.S. debt ceiling at the end of each year from 1981 to 2010. Indicates which President and which political party controlled Congress by year.

A statutorily imposed debt ceiling has been in effect since 1917 when the US Congress passed the Second Liberty Bond Act. Before 1917 there was no debt ceiling in force, but there were parliamentary procedural limitations on the amount of debt that could be issued by the government.

Except for about a year during 1835–1836, the United States has continuously had a fluctuating public debt since the US Constitution legally went into effect on March 4, 1789. Debts incurred during the American Revolutionary War and under the Articles of Confederation led to the first yearly report on the amount of the debt ($75,463,476.52 on January 1, 1791[1]). The national debt, as expressed in absolute dollars, has increased under every presidential administration since Herbert Hoover.

Prior to 1917, the United States did not have a debt ceiling, with Congress either authorizing specific loans or allowing Treasury to issue certain debt instruments and individual debt issues for specific purposes. Sometimes Congress gave Treasury discretion over what type of debt instrument would be issued.[2]

Between 1788 and 1917 Congress would authorise each bond issue by the United States Treasury by passing a legislative act that approved the issue and the amount.

In 1917, during World War I, Congress created the debt ceiling with the Second Liberty Bond Act of 1917, which allowed Treasury to issue bonds and take on other debt without specific Congressional approval, as long as the total debt fell under the statutory debt ceiling. The 1917 legislation set limits on the aggregate amount of debt that could be accumulated through individual categories of debt (such as bonds and bills).

In 1939, Congress instituted the first limit on total accumulated debt over all kinds of instruments.[3] The debt ceiling, in which an aggregate limit is applied to nearly all federal debt, was substantially established by Public Debt Acts[4][5] passed in 1939 and 1941 and subsequently amended. The United States Public Debt Act of 1939 eliminated separate limits on different types of debt.[6] The Public Debt Act of 1941 raised the aggregate debt limit on all obligations to $65 billion, and consolidated nearly all federal borrowing under the U.S. Treasury and eliminated the tax-exemption of interest and profit on government debt.[6]

A feature of the Public Debt Acts, unlike the 1919 Victory Liberty Bond Act which financed American costs in the First World War, was that the new ceiling was set about 10% above the actual federal debt at the time.[7]

Prior to the Budget and Impoundment Control Act of 1974, the debt ceiling played an important role since Congress had few opportunities to hold hearings and debates on the budget.[8] James Surowiecki argued that the debt ceiling lost its usefulness after these reforms to the budget process.[9]

In 1979, noting the potential problems of hitting a default, Dick Gephardt imposed the "Gephardt Rule," a parliamentary rule that deemed the debt ceiling raised when a budget was passed. This resolved the contradiction in voting for appropriations but not voting to fund them. The rule stood until it was repealed by Congress in 1995.[10]

Number of requests for increase

Depending on who is doing the research, it is said that the US has raised its debt ceiling (in some form or other) at least 90 times in the 20th century.[11]

In 2011, Republicans in Congress used the debt ceiling as leverage for deficit reduction because of the lack of Congressional normal order for fiscal year budget votes on the chamber floors and subsequent conference reconciliations between the House and the Senate for final budgets. The credit downgrade and debt ceiling debacle contributed to the Dow Jones Industrial Average falling 2,000 points in late July and August. Following the downgrade itself, the DJIA had one of its worst days in history and fell 635 points on August 8.[15] The GAO estimated that the delay in raising the debt ceiling raised borrowing costs for the government by $1.3 billion in 2011 and noted that the delay would also raise costs in later years. The Bipartisan Policy Center extended the GAO's estimates and found that the delay raised borrowing costs by $18.9 billion over ten years.[16]

Following the increase in the debt ceiling to $16.394 trillion in 2011,[17] the United States again reached the debt ceiling on December 31, 2012 and the Treasury began taking extraordinary measures. The fiscal cliff was resolved with the passage of the American Taxpayer Relief Act of 2012 (ATRA), but no action was taken on the debt ceiling. With the ATRA tax cuts, the government indicated that the debt ceiling needed to raise by $700 billion for it to continue financing operations for the rest of the 2013 fiscal year[18] and that extraordinary measures were expected to be exhausted by February 15.[19] Treasury has said it is not set up to prioritize payments, and it's not clear that it would be legal to do so. Given this situation, Treasury would simply delay payments if funds could not be raised through extraordinary measures and the debt ceiling had not been raised. This would put a freeze on 7% of the nation's GDP, a contraction greater than the Great Recession. The economic damage would worsen as recipients of social security benefits, government contracts, and other government payments cut back on spending in response to having the freeze in their revenue.[20]

The No Budget, No Pay Act of 2013 suspended the debt ceiling from February 4, 2013 until May 19, 2013. On May 19, the debt ceiling was formally raised to approximately $16.699 trillion to accommodate the borrowing done during the suspension period. However, after the end of the suspension, the ceiling was raised only to the actual debt at that time, and Treasury needed to activate extraordinary measures to avoid a default. With the impacts of the American Taxpayer Relief Act of 2012 tax increases on those who make $400,000 per year, the 2013 sequester, and a $60 billion payment from Fannie Mae and Freddie Mac that reached the Treasury on June 28, 2013, the extraordinary measures were predicted to last until October 17 by the Treasury,[21] but financial firms suggested funds might have lasted a little longer. Jefferies Group said extraordinary measures might have lasted until the end of October while Credit Suisse estimated mid-November.[22]

Note that this table does not go back to 1917 when the debt ceiling started.

1. The figures are unadjusted for the time value of money, such as interest and inflation and the size of the economy that generated a debt.

2. The debt ceiling is an aggregate of gross debt, which includes debt in hands of public and in Intragovernment accounts.

3. The debt ceiling does not necessarily reflect the level of actual debt.

Retrieved from "https://en.wikipedia.org/w/index.php?title=History_of_United_States_debt_ceiling&oldid=970921722"
Categories:
Hidden categories:
The article is a derivative under the Creative Commons Attribution-ShareAlike License. A link to the original article can be found here and attribution parties here. By using this site, you agree to the Terms of Use. Gpedia Ⓡ is a registered trademark of the Cyberajah Pty Ltd.