Horace Porter (April 15, 1837 – May 29, 1921) was an American soldier and diplomat who served as a lieutenant colonel, ordnance officer and staff officer in the Union Army during the American Civil War, personal secretary to General and President Ulysses S. Grant. He also was secretary to General William T. Sherman, vice president of the Pullman Palace Car Company and U.S. Ambassador to France from 1897 to 1905.[1] 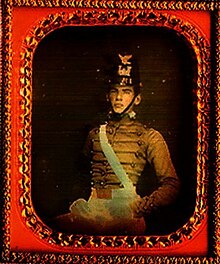 Porter as a cadet at West Point

Porter was born in Huntingdon, Pennsylvania, on April 15, 1837,[2] the son of David Rittenhouse Porter (1788–1867), an ironmaster who later served as Governor of Pennsylvania, and Josephine McDermott.

Porter was educated at The Lawrenceville School in Lawrenceville, New Jersey (class of 1856)[4] and Harvard University.[5] He graduated from West Point July 1, 1860.[2]

Porter was commissioned a second lieutenant on April 22, 1861 and a first lieutenant on June 7, 1861.[2] During the American Civil War, Porter served in the Union Army, reaching the grade of lieutenant colonel by the end of the war.[2]

During the war, he served as Chief of Ordnance in the Army of the Potomac, Department of the Ohio and the Army of the Cumberland.[2] He was distinguished in the Battle of Fort Pulaski, Georgia, at the Battle of Chickamauga, the Battle of the Wilderness and the Second Battle of Ream's Station (New Market Heights).[2] On June 26, 1902 or July 8, 1902,[6] Porter received the Medal of Honor for the Battle of Chickamauga as detailed in the citation noted below. In the last year of the war, he served on the staff of Gen. Ulysses S. Grant, later writing a lively memoir of the experience, Campaigning With Grant (1897).[2][7]

From 1869 to 1872, Porter served as President Grant's personal secretary in the White House. At the same time, he held the grade of colonel and an appointment as aide-de-camp to General William T. Sherman.[2]

Porter had refused to take a $500,000 vested interest bribe from Jay Gould, a Wall Street financier, in the Black Friday gold market scam. He told Grant about Gould's attempted bribery, thus warning Grant about Gould's intention of cornering the gold market. However, during the Whiskey Ring trials in 1876, Treasury Solicitor Bluford Wilson claimed that Porter was involved with the scandal.[9][10] Porter testified before the committee investigating the scandal, and was never formally charged with wrongdoing.[11] Porter resigned from the U.S. Army on December 31, 1873,[2]

After resigning from the Army, Porter became vice president of the Pullman Palace Car Company, and later, president of the West Shore Railroad. He was U.S. Ambassador to France from 1897 to 1905,[2] paying for the recovery of the body of John Paul Jones and sending it to the United States for re-burial. He received the Grand Cross of the Legion of Honor from the French government in 1904. In addition to Campaigning with Grant, he also wrote West Point Life (1866).[1]

Porter was president of the Union League Club of New York from 1893 to 1897. In that capacity, he was a major force in the construction of Grant's Tomb.[1]

In 1891 he joined the New York Society of the Sons of the American Revolution, where he served as President General from 1892 through 1896. He was assigned national membership number 4069 and state membership number 69.[12]

He died in Manhattan, New York and is interred at the Old First Methodist Church Cemetery in West Long Branch, New Jersey.[13]

While acting as a volunteer aide, at a critical moment when the lines were broken, rallied enough fugitives to hold the ground under heavy fire long enough to effect the escape of wagon trains and batteries.[18]

Retrieved from "https://en.wikipedia.org/w/index.php?title=Horace_Porter&oldid=932671861"
Categories:
Hidden categories:
The article is a derivative under the Creative Commons Attribution-ShareAlike License. A link to the original article can be found here and attribution parties here. By using this site, you agree to the Terms of Use. Gpedia Ⓡ is a registered trademark of the Cyberajah Pty Ltd.