Page of the United States House of Representatives

(Redirected from House Page Board)
Jump to navigation Jump to search

As early as 1827, males were hired to serve as messengers in Congress. In the Congressional Record (formerly known as the Congressional Globe), the term "page" was first used in 1839 and referred to as a youth employed as a personal attendant to a person of high rank. However, some sources claim that pages have served as messengers since the very first Congress in 1789.[3] The practice of using pages as a messaging service stemmed out of a tradition that dated back to the Middle Ages.[citation needed]

Following a scandal in 1983, the Page Residence Hall was established[citation needed] and Congress required that all pages be at least 16 years old and juniors in high school. Previous to that, the age range of pages was 14 to 18 and no type of housing was provided.[citation needed]

On March 1, 1954, members of the Puerto Rican Nationalist Party opened gunfire on the House Chamber during debate from the viewing gallery and injured five members of Congress. In this U.S. Capitol shooting incident (1954) Congressman Alvin Morell Bentley (R-MI) was seriously wounded by a bullet fired by Lolita Lebrón. Six pages carried Congressman Bentley off the house floor. The famous photograph of pages carrying Congressman Bentley can be found in the Page Residence Hall as well as the Republican Cloakroom and Page School; two of the pages in the picture later became members of Congress: Paul Kanjorski (D-PA) and Bill Emerson (R-MO), for whom the main assembly hall in the Page School was named. A bullet hole from the attack can still be found directly above what was the Democratic page desk.

In 1983, it came to light that Representatives Dan Crane (R-IL) and Gerry Studds (D-MA) had engaged in sexual relationships with 17-year-old congressional pages. In Crane's case, it was a 1980 relationship with a female page and in Studds's case, it was a 1973 relationship with a male page. Because Washington, D.C.'s age of consent is 16, no crimes were committed. The House Ethics Committee reprimanded both on July 14, 1983. However, Representative Newt Gingrich demanded the expulsion of both Congressmen. On July 20, the House voted for censure, the first time that censure had been imposed for sexual misconduct. Crane, who tearfully apologized for his transgression, lost his bid for reelection in 1984. Studds, however, refused to apologize, and he continued to be reelected until his retirement in 1997.

In 2002, 11 pages were dismissed for using marijuana. The incident occurred after a female page who had family in the Washington, D.C., area invited fellow pages to her home, where marijuana was used while the teenagers were unsupervised. That page later brought drugs to the dormitory and this was reported to authorities.[10]

The Mark Foley scandal involved the now former Republican congressman Mark Foley, who sent emails and instant messages of a sexual nature to several former congressional pages. Page Board Chairman John Shimkus said "that in late 2005 he learned — through information passed along by Rodney Alexander's office — about an e-mail exchange in which Foley asked about the youngster's well-being after Hurricane Katrina, and requested a photograph."[11]

Rep. Sue Kelly, who was Chairwoman of the Page Board from 1998 to 2001,[12] was caught up in the scandal when three pages said she was aware of Foley's inappropriate attention toward pages during her tenure.[13]

End of the program

On August 8, 2011, Speaker John Boehner (R-OH) and Minority Leader Nancy Pelosi (D-CA) announced in a joint statement that the House would end the page program, saying technological advancements made page services unnecessary in light of the cost of the program, which was more than $5 million ($69,000-$80,000 per page).[2] "Pages, once stretched to the limit delivering large numbers of documents and other packages between the U.S. Capitol and House office buildings, are today rarely called upon for such services, since most documents are now transmitted electronically", they said.[2] "We have great appreciation for the unique role that pages have played in the history and traditions of the House of Representatives. This decision was not easy, but it was necessary due to the prohibitive cost of the program and advances in technology that have rendered most page-provided services no longer essential to the smooth functioning of the House."[2] The Senate Page program continued.[2][16]

In the modern era, pages were nominated by representatives based upon a highly competitive application process. Pages served during the spring and fall semesters of their junior year, as well as during summer sessions before or after their junior year. Prospective House Pages were nominated by a representative or congressional delegate (pages have come from all 50 U.S. states as well as the District of Columbia, Puerto Rico, Guam, U.S. Virgin Islands, and American Samoa). It was a general rule that only one nominee was permitted per representative, except for party leadership. Each group of pages, typically referred to as a "class", typically consisted of between 45 and 75 students, with the summer sessions being larger.

The page's work life revolved around the United States Capitol in Washington, D.C. Officially a division of the Office of the Clerk, the Page Program existed primarily to provide supplement support to various House offices. Two full-time, adult employees of the Office of the Clerk served as "chief pages" (commonly referred to as work bosses), although some holders of this position self-titled themselves as "page supervisors" to avoid misidentification. These employees were not partisan, although there was one Republican Supervisor and one Democratic Supervisor to direct the day-to-day operations of the page groups and provide front-line adult supervision. Additionally, the Office of the Clerk employed a page coordinator to coordinate all aspects of page life, school, work, and dormitory and handle administrative responsibilities.

Page responsibilities included taking statements from members of Congress after speeches (for the Congressional Record), printing and delivering vote reports to various offices, tending members' personal needs while on the floor of the House, managing phones in the cloakrooms, and ringing the bells for votes.

For work purposes, pages were divided into two groups, Republican and Democratic, based upon the party affiliation of their sponsoring Member. On both sides of the aisle, the vast majority of pages were based on the Floor of the House and serve as runners. These runners were dispatched to various House offices, typically taking advantage of the United States Capitol subway system to transport various documents by overseer or desk pages. The overseer pages were responsible for ensuring that all inbound call requests were met as quickly as possible and that the workload was distributed as even as possible among the runners. A fair number of dispatches involve the runners going to Congressional offices to bring proposed legislation to the cloakrooms. At the cloakrooms, a cloakroom page, or a cloakroom manager would sign that he or she had received the legislation. It was then brought to the bill hopper, or simply, the hopper (a repository box on the rostrum on the Floor) for official submission to the Clerk of the House.

Pages also delivered correspondence to and from the respective Cloakrooms as well as offices in the Capitol complex. Pages also distributed American flags that were to be flown over the Capitol.

Speaker's pages served solely the Office of the Speaker, conducting tasks that ranged from fetching beverages and snacks for the Speaker and his or her official guests to helping to compose internal memoranda. The assignment of speaker's pages was suspended in September 2007.

Documentarian pages, or "docs," were selected from the group of pages in the majority party and were perhaps the two most visible pages. Seated to the stage-left of the rostrum, these pages had several important responsibilities. When the House gaveled into session, the documentarians were responsible for raising the U.S. flag on the roof of the south wing of the Capitol, officially notifying the public that the House was in session. At the close of the day, when the House adjourned, they returned to the roof and lowered the flag. Additionally, they were responsible for activating the bell system which rang throughout the House side of the United States Capitol Complex, notifying Representatives that the House was in session or that there was a vote. Also, they provided assistance to the various clerks and congressional parliamentarians seated at the rostrum, as well as the Speaker Pro Tempore. Although highly independent, these pages fell under the de facto supervision of the Timekeeper (Clerk to the Parliamentarian). Docs worked in pairs, until the House adjourned. They were present during Special Orders, a time when a member may speak for one hour on any subject, which were conducted after the day's legislative business ended. 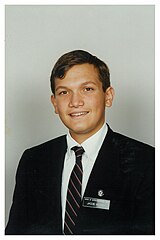 House Pages wore uniforms consisting of a navy blazer, white dress shirt, tie, lapel pin, name-tag, gray slacks for boys and gray skirts or slacks for girls, and black shoes. Until the early 1960s, pages were required to wear suits with knickers as pants, long after the style had become obsolete.

Pages serving during the school year attended the House Page School, located on the attic floor of the Jefferson, or main building of the Library of Congress. The school was accredited by the Middle States Association of Colleges and Secondary Schools. Pages attended school from 6:45 to 10:00 a.m. The only exception was for pages who worked past 10 p.m. the evening prior.

Retrieved from "https://en.wikipedia.org/w/index.php?title=Page_of_the_United_States_House_of_Representatives&oldid=999914556#House_Page_Board"
Categories:
Hidden categories:
The article is a derivative under the Creative Commons Attribution-ShareAlike License. A link to the original article can be found here and attribution parties here. By using this site, you agree to the Terms of Use. Gpedia Ⓡ is a registered trademark of the Cyberajah Pty Ltd.