Jump to navigation Jump to search
County in Maryland

Howard County is included in the Baltimore-Columbia-Towson, MD Metropolitan Statistical Area, which is also included in the Washington-Baltimore-Arlington, DC-MD-VA-WV-PA Combined Statistical Area. However, recent development in the south of the county has led to some realignment towards the Washington, D.C. media and employment markets. The county is home to Columbia, a major planned community of approximately 100,000 founded by developer James Rouse in 1967.

Howard County is frequently cited for its affluence, quality of life, and excellent schools. With an estimated median household income of $120,194 in 2016, Howard County had the second-highest median household income of any U.S. county in 2016.[3] Many of the most affluent communities in the Baltimore-Washington Metropolitan Area, such as Clarksville, Dayton, Glenelg, Glenwood, and West Friendship, are located along the Route 32 corridor in Howard County. The main population center of Columbia/Ellicott City was named second among Money magazine's 2010 survey of "America's Best Places to Live."[4]

In 2010, the center of population of Maryland was located in the Howard County town of Jessup.[5] 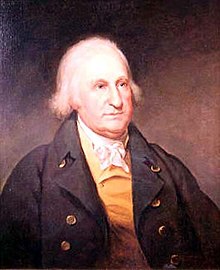 The name of the county honors Colonel John Eager Howard,[6] an officer in the "Maryland Line" of the Continental Army in the American Revolutionary War, commander notably at the Battle of Cowpens in South Carolina in 1781, among others. He was the fifth governor of Maryland from 1788 to 1791.[7]

The lands of prehistoric Howard County were populated by Native Americans. The Maryland Historical Trust has documented sites along the Patapsco, Patuxent, Middle and Little Patuxent River valleys.[8] In 1652, the Susquehannock tribes signed a peace treaty with Maryland, giving up their provenance over the territory that is now Howard County.[9] In 1800, the mean center of U.S. population as calculated by the US Census Bureau was found in what is now Howard County.[10]

In 1838, Dr. William Watkins of Richland Manor proposed the "Howard District" of Anne Arundel County.[11] After several adjournments, the area of western Anne Arundel County was designated the Howard District in 1839.[12] The district had the same status as a county except that it was not separately represented in the Maryland General Assembly. In 1841, the county built its first courthouse in Ellicott City.[13] At the January 1851 constitutional convention, Thomas Beale Dorsey submitted a petition led by James Sykes. A committee was formed with Dorsey, Bowie, Smith, Harbine and Ricaud. After several postponements, the district was erected officially as Howard County on March 7, 1851.[14]

The plantations of modern Howard County used slave labor as early as 1690. At the time of the Underground Railroad, some Howard County residents assisted slaves who were escaping to freedom. This was particularly risky, as many prominent plantation families were Confederate sympathizers during the Civil War, contributing militiamen to the South to protect local interests.[15] Maryland was exempt from the Emancipation Proclamation, later abolishing slavery in the update of the Maryland Constitution in November 1864.[16]

By 1899, Howard County contained 400 miles (640 km) of dirt and 48 miles (77 km) of stone roads, including three paid turnpikes maintained by 118 men. Most traffic consisted of loads delivered to rail crossings.[18] In 1909, County Commissioners Hess, Werner and O'Neil were charged with malfeasance regarding contract bids.[19]

In 1918, a deadly flu pandemic swept the county starting with an early outbreak in Camp Meade in adjacent Anne Arundel County.[20][21] The 1930s saw a shift from one-room schoolhouses to centralized schools with bus service. By 1939 wheat harvesting fell to just 18,800 acres (7,600 ha).[22] In 1940, local newspaper owner Paul Griffith Stromberg led a five-county commission to study a superhighway between Baltimore and Washington through Howard County.[23] The Federal Aid Highway Act of 1956 eventually led to the construction of Interstate 70 across northern Howard County and Interstate 95 across the eastern part of the county.[24] The sparsely populated county hosted population centers in Ellicott City, Elkridge, Savage, North Laurel and Lisbon with W.R. Grace and Johns Hopkins Applied Physics Lab as the largest new employers. Residents elected officials that campaigned to keep the county rural while planners prepared public works to support a quarter million residents by the year 2000. Race relations and desegregation became major issues of the time.[25]

The county has a number of properties on the National Register of Historic Places.[27]

Daucus carota (Queen Anne's Lace) was designated as the official flower of Howard County in 1984.[29]

Howard County is located in the Piedmont Plateau region of Maryland, with rolling hills making up most of the landscape. It is bounded on the north and northeast by the Patapsco River, on the southwest by the Patuxent River, and on the southeast by a land border with Anne Arundel County. Both the Patapsco and Patuxent run largely through publicly accessible parkland along the county borders. The Patuxent border includes the Triadelphia and Rocky Gorge reservoirs.

Howard County lies in the humid subtropical climate zone. As one travels west in the county away from the Baltimore area, the winter temperatures get lower and winter snow is more common. Annual rainfall is about 45 inches (1,100 mm) throughout the county.[30] Over a 60-year period from 1950 to 2010, there were 394 National Climatic Data Center reportable events causing 617 injuries, and 99 fatalities. There were 9 reported tornadoes, reaching a maximum of F2, with no recorded fatalities.[31]

The Howard County Public School System manages 71 schools and serves approximately 49,000 students. The graduation rate from this school district was 90.4% in 2009,[42] and the county's schools are ranked among the best in the state. Student test scores consistently top the list for all Maryland school districts. Howard High School is currently the largest school in the county with over 1,700 students.

In 2013 Howard County Library System was selected as the Library of the Year by Library Journal[43] and cited by editor-at-large, John N. Berry, as "a 21st-century library model, with a position, doctrine, purpose, and curriculum worthy of study and consideration by every library in America, if not the world." In 2015 the Howard County Library System was designated the top Star Library in its class.[44]

Howard County has voted for the Democratic presidential candidate in every election from 1992 on. The less-populated western and northern parts of Howard County lean Republican. The more heavily populated southern and eastern parts are heavily Democratic. The county has voted for Democrats at the state and federal level, though it voted for Republican Bob Ehrlich in the 2002 gubernatorial election over Democrat Kathleen Kennedy Townsend and Larry Hogan over Democrat Anthony G. Brown in the 2014 gubernatorial election.

From 1914 to 1968, Howard County was governed by a system of three elected commissioners with four-year terms.[45] Prior to 1962, the only polling location in the county was located in Ellicott City. In May 1962, voters were offered a second location to vote, also in Ellicott City at the National Armory on Montgomery Road.[46] Senator James Clark proposed a five-person County Council and a County Executive in 1965.[47] In 1968, the county implemented a charter form of government.[48] In 1984 a councilmanic referendum was approved, switching council from at-large representation to district representation.[49] The County Council serves as the county's legislative branch; members also provide constituent service and sit as members of the Zoning Board and Liquor Board. The current Howard County Executive is Democrat Calvin Ball III, who was elected in November 2018 and took office on December 3, 2018.[50] Most of the county is in Maryland's 7th congressional district, represented by Democrat Elijah Cummings. A small portion is in Maryland's 3rd congressional district, represented by Democrat John Sarbanes.

The County Council adopts ordinances and resolutions, and has all of the County's legislative powers. There are five council districts throughout the county.[52] The current County Council as of December 2018 includes 4 Democrats and 1 Republican. 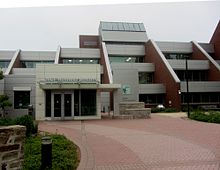 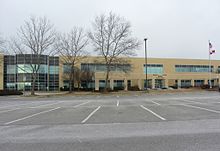 Howard County Public School System employs 8,136 of which 4,670 are teachers.[83] The County Government employs 3,323 outside of the school system with 672 police, 482 public works, and 472 fire and rescue employees.[84] The top ten private sector employers in Howard County are as follows:[85] 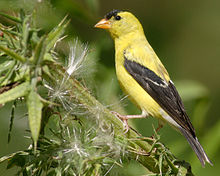 The American goldfinch is the official county bird of Howard County.[29]

Awards and recognitions achieved by Howard County or locations within it include the following:

Howard County does not have any public or commercial airport facilities. A 1967 Airport Study Commission recommended a facility for 150–250 aircraft to provide economic development, but was not initiated.[108] With the closure of Haysfield Airport, there is one privately owned airstrip, Glenair Airport in Glenelg.[109] Commercial air service is provided by Baltimore–Washington International Thurgood Marshall Airport, Ronald Reagan Washington National Airport, and Washington Dulles International Airport.

Bus routes that operate in Howard County are managed by the Regional Transportation Agency of Central Maryland and the Maryland Transit Administration. 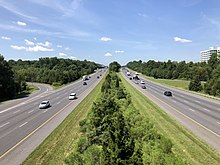 I-95 in Howard County

Howard County has no incorporated municipalities.

The Census Bureau recognizes the following Census-designated places in the county:

Unincorporated places not listed as Census-designated places but known in the area include:

Retrieved from "https://en.wikipedia.org/w/index.php?title=Howard_County,_Maryland&oldid=935060636"
Categories:
Hidden categories:
The article is a derivative under the Creative Commons Attribution-ShareAlike License. A link to the original article can be found here and attribution parties here. By using this site, you agree to the Terms of Use. Gpedia Ⓡ is a registered trademark of the Cyberajah Pty Ltd.