Presiding over the country during the Great Depression, the New Deal, the Court, dominated through the 1937 term by four conservative justices, known as the "Four Horsemen" (Pierce Butler, James Clark McReynolds, George Sutherland, and Willis Van Devanter), struck down many of President Franklin D. Roosevelt's New Deal policies.[1] Roosevelt's frustration with the Court led to his so-called court-packing scheme, a 1937 proposal—defeated in Congress—to increase the number of justices on the Supreme Court in order to affect its ideological position.

The Hughes Court began in 1930, when Hughes was confirmed to replace William Howard Taft as Chief Justice. As president, Taft had appointed Hughes to the position of Associate Justice in 1910, and Hughes had remained on the Court until his resignation in 1916 to run for president.

Associate Justice Edward Terry Sanford died less than a month after Hughes's confirmation as Chief Justice, and was succeeded by Justice Owen Roberts in May 1930, after the Senate rejected President Herbert Hoover's first nominee, John J. Parker. With the confirmation of Roberts, the Hughes Court consisted of Hughes, Roberts, and seven veterans of the Taft Court: Oliver Wendell Holmes, Jr., Van Devanter, McReynolds, Louis Brandeis, Sutherland, Butler, and Harlan F. Stone. Holmes retired in 1932 and was succeeded by Benjamin N. Cardozo; like Roberts and Hughes, Cardozo was appointed by President Hoover.

Roosevelt made his first appointment to the court in 1937, replacing the retiring Van Devanter with Hugo Black. Two justices left the Court in 1938: Sutherland (retired) and Cardozo (died). They were succeeded by Stanley Forman Reed (Sutherland), and Felix Frankfurter (Cardozo). After Brandeis retired from the court in 1939, Roosevelt appointed William O. Douglas to his seat. Douglas served from April 15, 1939 to November 12, 1975 – 36 years, 209 days, which is longer than any other justice in the Court's history. Butler also retired in 1939, and was replaced by Frank Murphy. With these appointments, the president was able to successfully move the Court to a more liberal and agreeable position. Lastly, McReynolds retired shortly before Hughes did, and Roosevelt replaced him with James F. Byrnes. The Hughes Court ended with Hughes's retirement in 1941. Roosevelt selected Associate Justice Stone to succeed Hughes. 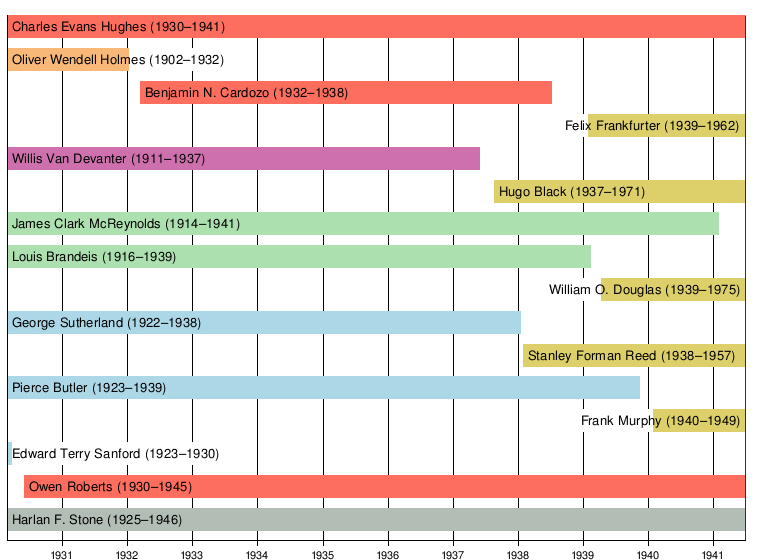 Rulings of the Court 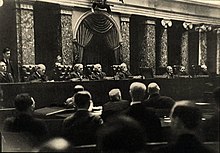 The Hughes Court in 1937, photographed by Erich Salomon.

The Hughes Court has been called a time of "constitutional revolution" in which the court turned away from the Lochner era of striking down government regulations.[5] The Hughes Court was divided into three major blocs of justices.[2] The Four Horsemen consisting of Justices Sutherland, Butler, McReynolds, and Van Devanter were a group of conservative justices who often voted to strike down New Deal programs, while a liberal bloc known as the Three Musketeers, consisting of Justices Brandeis, Stone, and Cardozo, often upheld New Deal programs. Chief Justice Hughes and Justice Roberts were nicknamed the "roving justices" and voted with either bloc depending on the case.[2] Roberts's decision in 1937 to vote to uphold Washington's minimum wage law has been described as the switch in time that saved nine in that it represented a new dominance of the liberal faction of the court (as well as a defeat to Roosevelt's plan to expand the size of the court).[1] However, some scholars, such as Barry Cushman, have rejected this conventional wisdom as overly simplistic in emphasizing the justices's roles as political actors.[5][6] Cushman argues that many of the New Deal acts were struck down because they were not written with proper consideration for constitutional issues, and that the Roosevelt Justice Department under Homer Cummings failed to adequately defend the laws in court.[6] Regardless of the reasons for the change, the Supreme Court did not strike down another New Deal law after 1936.[7] The subsequent retirements or deaths of three of the Four Horsemen (and Justice Cardozo) gave Roosevelt the opportunity to appoint liberal Justices who ruled more favorably on his agenda.[7]

Works centering on the Hughes Court

Retrieved from "https://en.wikipedia.org/w/index.php?title=Hughes_Court&oldid=963205065"
Categories:
Hidden categories:
The article is a derivative under the Creative Commons Attribution-ShareAlike License. A link to the original article can be found here and attribution parties here. By using this site, you agree to the Terms of Use. Gpedia Ⓡ is a registered trademark of the Cyberajah Pty Ltd.