Jump to content
City and Municipality in Zeeland, Netherlands

listen)) is a municipality and city in southwestern Netherlands in the east of Zeelandic Flanders.

Map of the star fort

Hulst was captured from the Spanish in 1591 by Maurice of Orange but was recaptured by Archduke Albert in 1596.

In 1640, the Dutch forces tried to conquer the city, but they were defeated in battle by the Spanish Army, and Frederick Henry was forced to retreat.

In 1645, the Siege of Hulst (to control the left bank of the Schelde river) occurred. It was led by Prince of Orange Frederick Henry, during the Eighty Years' War (1568–1648) with Spain.

A further siege took place in 1702, where General Menno van Coehoorn defended the town successfully for the Dutch and in 1747 when it was taken by the French after incompetent defence by Lt. General Pieter de la Rocque.[5]

In the seventeenth century, a star fort was constructed.[6] The fortifications, constructed during that time, are historic examples of Dutch fortress architecture.

The name Hulst (Holly in English) would appear to come from the shape of the battlements. Holly is depicted growing around the towns crest.

Dutch Topographic map of the municipality of Hulst, June 2015

Hulst is neighbouring the municipalities of Terneuzen in the west, Stekene (Belgium) and Sint-Gillis-Waas (B) in the south, Beveren (B) in the east, and Reimerswaal in the north. The river Western Scheldt separates the land of Reimerswaal and Hulst.

The Drowned Land of Saeftinghe (Verdronken land van Saeftinghe) is a natural reserve in the north of the municipality. Its name refers to the Saeftinghe legend.

The population centers in the municipality are:

The mayor of Hulst is Jan-Frans Mulder of the Christian Democratic Appeal.

Since June 2018, the city has its own letter artwork (a local variation on the capital's I Amsterdam). This work of art can be seen in turns at various locations in the municipality. The underlying idea is that the h at the beginning of a word is not pronounced in the Zeelandic / East Flemish dialect. By combining the letters n and h (in white and green) you can read the text in ulst in addition to i hulst. Under this concept in ulst, a campaign for and branding of the city of Hulst was launched simultaneously. 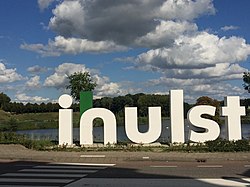 Letter artwork for the city of Hulst

Hulst is twinned with

Wikivoyage has a travel guide for Hulst.