The Incheon Airport Maglev[2] is a maglev line in South Korea opened in February 3, 2016. It is the world's second commercially operating unmanned urban maglev line after Japan's Linimo. The trains are lighter, cutting construction costs in half.[3] The majority of construction was completed by November 2012.

It links Incheon International Airport to the Yongyu Station and Leisure Complex while crossing Yeongjong island.[4] The line is not considered part of the Seoul Metropolitan Subway. It is free of charge for all riders. It initially operated between 09:00 and 18:00. Hours have been extended to between 07:30 and 20:00. Departures are every 15 minutes from all stations. It offers a transfer to Incheon International Airport Terminal 1 Station of AREX [5]

This maglev train is one of the first commercial maglev trains since the 1980s. Two more stages are planned of 9.7 km and 37.4 km. Once completed it will become a circular line.[7][8][9] These lines make up a core project that the Korea Rail Network Authority managed.[6] 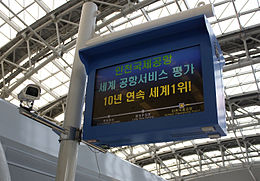 The maglev train, nicknamed ECOBEE, was co-developed by the Korea Institute of Machinery and Materials (known as the KIMM which is part of the Korea University of Science and Technology) and Hyundai Rotem.[10][11] It is 6.1 kilometres (3.8 mi) long, with six stations and a 110 km/h (68 mph) operating speed.[12]

This train was part of Korea's Urban Maglev Program (UMP) which started in December 2006. This program reached out to prominent companies and organizations in the railway concentrations previously mentioned. The UMP represents Korea's push for R&D in maglev systems in order to engender a magnetic levitation transportation system to replace Korea's current urban transportation means. This program was expected to be the equivalent of US$450 million. Contributions were made from Incheon International Airport Corp. and the city of Incheon. This train system is the result of a development project started in 1989 within the Korea Institute of Machinery and Materials (KIMM).[6]

Hyundai-Rotem is a South Korean company that manufactures rolling stock. This company is another entity that managed the vehicle development of this maglev train. This company is exporting the same technology for the planned Leningrad MagLev System, potentially the first urban commuter maglev system in Europe.[6][13]

While a magnetic levitation train is capable of performing at extremely high velocities, the configurations so far consume more energy than the trains that are being used currently. This setback is one of the barriers that is preventing magnetic levitation trains from being commercialized past the experimental and entry phase. A group of scientists in the Daejeon Metropolitan Express Transit Corporation of South Korea (the corporation that operates the Daejeon Metro) focused on the braking system.[14] 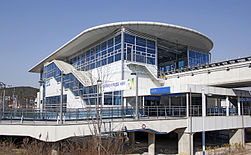 Train systems such as the Incheon Airport Maglev use air brakes and electric brakes. However, magnetic levitation trains use regenerative braking and plugging braking as opposed to normal trains using regenerative braking and air braking. Regenerative braking is used when the speed of the motor exceeds the synchronous speed. When this happens, the motor changes current flow so that the motor brakes. After this happens, the excess power is converted to power for the motor. Plugging braking is used when the supply terminals are switched, but it is criticized as a wasteful practice, because in order to switch the terminals, an external resistor needs to be implemented as a stopper for the current flow. As a result, a lot of power is squandered.[14]

With the Urban Transit Maglev (now referred to as the "Incheon Airport Maglev") in South Korea as a test model, a study was conducted on exploring the relationship between the variation of slip frequency and energy efficiency of regenerative braking. The slip frequency decreases the limit for the regenerative extinction point. After testing, researchers noticed that this decrease of the frequency led to a decrease in the conversion time of the phase current back into the system. This decreased the required energy to brake, thus accumulating more regenerated power. This discovery is one of the evolutionary advances in the process of designing an energy efficient magnetic levitation train system.[14]

Retrieved from "https://en.wikipedia.org/w/index.php?title=Incheon_Airport_Maglev&oldid=926659767"
Categories:
Hidden categories:
The article is a derivative under the Creative Commons Attribution-ShareAlike License. A link to the original article can be found here and attribution parties here. By using this site, you agree to the Terms of Use. Gpedia Ⓡ is a registered trademark of the Cyberajah Pty Ltd.