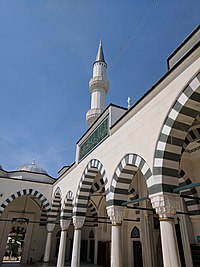 The Diyanet Center of America, a mosque and community center in Lanham, June 2017.

There are around 70,000 Muslims in Maryland in the United States as of December 1992, according to the American Muslim Council. This is the tenth highest number of Muslims of all U.S. states, representing 1.4% of the Muslim population in the country, as well as 1.4% of the total population of Maryland.[1]

Baltimore has had a Muslim community as far back as 1943. Masjid Ul-Haqq was established as a Nation of Islam mosque in 1947, on Ensor Street. The congregation later moved to 1000 Pennsylvania Avenue. The mosque was known as Mosque Six. The mosque moved to 514 Wilson Street in the late 1950s, where it is currently located. Nation of Islam leader Elijah Muhammad spoke at the mosque in 1960 to over a thousand people. After the death of Muhammad in 1975, the mosque's congregants converted to Sunni Islam and it became known as Masjid Ul-Haqq.[2][3]

In 1995, Maqbool Patel, the president of the Islamic Society of Baltimore, estimated the number of active Muslim families in the state to be 5,000, with 1,500 being in the Baltimore area.[7]

As of 2000, it is estimated that Frederick County has 200 Muslim families.[8] In 2000, the Islamic Society of Frederick planned the construction of a mosque along with a Muslim cemetery, which would be the first mosque in Frederick County and the first Muslim cemetery in Maryland. The land they wanted to build the mosque on, however, was off-limits for development, and their appeal to the county commissioners to connect to the county water and sewer lines was met with a tie vote, barring their ability to build a mosque.[9]

Retrieved from "https://en.wikipedia.org/w/index.php?title=Islam_in_Maryland&oldid=945807669"
Categories:
Hidden categories:
The article is a derivative under the Creative Commons Attribution-ShareAlike License. A link to the original article can be found here and attribution parties here. By using this site, you agree to the Terms of Use. Gpedia Ⓡ is a registered trademark of the Cyberajah Pty Ltd.