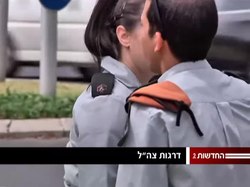 Play media
Video clips showing IDF soldiers with their ranks' insignias, from the archive of the Israeli News Company of Israel's Channel 2

The Israeli Defense Forces (IDF) has a unique rank structure. Because the IDF is an integrated force, ranks are the same in all services (there is no differentiation between army, navy, air force, etc.) The ranks are derived from those used in the pre-state paramilitary Haganah, which operated during the Mandate period in order to protect the Yishuv. This is reflected in the slightly compacted rank structure: for instance, the Chief of Staff (rosh ha-mate ha-klali, initials: Ramatkal) is seemingly only equivalent to a lieutenant general in other militaries.

Officers (ktzinim): Volunteers who have completed the officer's course. Officers serve for at least 36 months (3 years) for women in non-combat position and 44 months (3 years, 8 months) for men. Positions in specialized units require their officers to serve for more than this (for example, seven years for pilots). Promotions are based on ability and time served. It takes about a year to be promoted from 2nd lieutenant to 1st lieutenant and three years to be promoted from 1st lieutenant to captain. Army officers have bronze-metal insignia (replaced with subdued black-metal insignia in 2002), air force officers have silver metal insignia, and navy officers have gold-metal insignia or gold braid bars. Officers without a university education can be promoted to a maximum of Rav Seren (Major), although the IDF often sponsors the studies for their majors.

Academic officers (ktzinim akademaim): Special rank given to soldiers who are delaying completing officers' training so they can complete a professional education (usually in engineering, medicine, or law). A kama is equivalent to a 2nd lieutenant, and a ka'ab is equivalent to a 1st lieutenant, but are treated as if they were breveted to the next higher rank. Officers of these ranks are considered professional manpower and rarely take posts of command. Upon finally completing officers' training, an academic officer is immediately awarded the corresponding next "real" rank due to their experience in grade. Their insignia bars are embossed with scrolls (megilot) rather than laurel branches (aronot).

Non-commissioned officers (nagadim): The professional non-commissioned and warrant ranks, drawn from volunteers who signed on for military service after completing conscription. They usually are assigned to head-up the headquarters staff of a unit. Samal is a Hebrew abbreviation for segen mi-khutz la-minyan, which translates as “supernumerary deputy”; it is a Field NCO rank equivalent to a British or Commonwealth "Sergeant". Rav samal translates as "chief sergeant"; it is a career NCO rank equivalent to a British or Commonwealth "Staff Sergeant" or "Sergeant Major" / "Warrant Officer". Nagad is a variant of the biblical word nagid, which means "ruler" or "leader". Rav nagad is a senior staff NCO rank equivalent to the American ranks of "Chief Warrant Officer" and "Master Warrant Officer".

Enlisted (hogrim): The conscript and field NCO ranks. All Jewish or Druze conscripts must start their compulsory service at 18 (unless they receive a deferment); Christians, Muslims, and Circassians may volunteer at 17 or older. Enlisted male conscripts serve for 32 months (2 years and 8 months) and female conscripts serve for 24 months (2 years). In the IDF enlisted ranks are earned by means of time in service (pazam), rather than by a particular post or assignment. After 4 to 12 months the conscript is promoted to rav turai, after 18 to 20 months promoted to samal, and after 24 to 32 months is promoted to samal rishon. (This means that female conscripts reach no higher than samal during their compulsory service, unless they serve in combat positions or volunteer for longer terms).

Field NCOs (samal and samal rishon) who command sub-units (fire team or squad, respectively) are called mashak. This is an abbreviation that translates into English literally as "non-commissioned officer". It is a term of respect like the French Army's chef ("chief").

Recruits (tironim): Upon enlistment to military service in Israel, all soldiers begin a basic training course and undergo several weeks or months of 'integration' from citizens to soldiers. This course is called tironut ("recruit training") and the soldier being trained on this course is called a tiron (or "recruit"). This is often erroneously interpreted as a rank, similar to the US Army's private (E-1); tironim are ranked as turai (private), the same rank and paygrade as newly trained conscripts.[4]

The rank of memale makom katzín, initials:Mamak (ממלא מקום קצין) or "substitute officer", was created in the 1960s. The rank was considered below a 2nd lieutenant (initials:sagam). It indicated a cadet in the Israeli army who had finished the basic preparation for an officer rank (קורס קצינים בסיסי), but for some reason abandoned their studies, failed to complete the professional officer preparation (השלמה חיילית), or completed it with a minimal passing grade but was still found worthy of command. They occupied the lowest officer posts until a normal officer rank was found for the position. Those who finished the officer preparation with a minimal passing grade and were substituting in a command position were eligible for promotion to normal officer rank after a set period. It was discontinued in 1994.

The rank of Samal Bakhír, initials:Samab ("Senior Sergeant") was used from 1948 to 1952. It was the equivalent of a US Army First Sergeant. It was replaced by the rank of Rav Samal Yekhidati ("Unit Senior Sergeant"), similar to a British or Commonwealth Army Warrant Officer II (Company Sergeant Major).

The rank of rav turái rishón, initials:Ratash, or "chief private first class", was used from 1972 to 1982. There was an expansion of staff NCO ranks during this period and the higher rank was offered to conscripts who planned to enlist after completing their national service.

The rank of turai rishon, initials:Tarash, or "private first class", was disestablished in the Regular IDF in 1990. It still continued to be used in the Reserves until it was finally discontinued in 1999. Privates now retain their rank until promoted to corporal, usually after 10 months of peacetime service or 6 months for support roles or 4 months for combatants during hostilities. Corporals in combat units traditionally do not wear their rank insignia, remaining without insignia until they are promoted to the rank of sergeant.

Aiguillettes, Srochim in Hebrew are worn on the left shoulder* of the uniform to indicate a soldier's specific role a unit:[5]

When the IDF was created in 1948, there were 7 enlisted and NCO ranks, and 8 officer ranks. The ranks were as follows:[6]

IDF Ranks and their insignia were initially influenced by the British / Commonwealth model. This was due to the average Israeli servicemen's experience in the Commonwealth forces during World War Two.[dubious – discuss] This was later reformed when the IDF started to adopt a rank system similar to the United States armed forces in 1973 and the 1990s.

Rank insignia were originally cut from cloth or embroidered onto cloth patches. Bronze-metal officer's rank insignia worn on a red cloth backing were introduced for the army in 1949. Enlisted stripes for all arms were originally individual white half-chevrons with space between them. In an economy move, senior NCOs were distinguished by using the same bronze insignia (an oak-leaf or oak-leaf-in-a-wreath) as senior officers pinned to their sleeve insignia. In 1951 the Navy adopted golden-yellow half-chevrons and the Air Force adopted blue half chevrons.

A samal rishon was equal to a British Army staff sergeant / colour sergeant or a US Army technical sergeant (sergeant first class) / platoon sergeant. For the other services, the bronze-metal oak-leaf on the army's samal rishon rank insignia was replaced with a yellow anchor in a white hexagon for the Navy and a blue Star of David on a white circle for the Air Force. This was later replaced in 1951 with a gold-metal oak leaf for the Navy and a silver-metal oak leaf for the Air Force.

A Rav Samal (1951–1967) was equivalent to a British Army Warrant Officer II (Company Sergeant Major). The rank insignia was an Oak Leaf in a Laurel Wreath. It came in bronze-metal on a red enamel backing for the Army, gold-metal for the Navy, and silver-metal for the Air Force. It was worn on the lower right sleeve of the shirt or jacket or on a leather wrist strap when wearing short-sleeve order. It was divided into Rav-Samal Miktzoi ("Specialist Chief Sergeant"; a technical NCO) and Rav Samal Yekhidati ("Unit Chief Sergeant"; a command NCO) from 1955 to 1958.

A Rav Samal (1948–1951) was equivalent to a US Army Master Sergeant or Sergeant Major. The rank insignia was originally an oak leaf in a laurel wreath for the Army, a large yellow anchor in a yellow-bordered (1948) or solid-yellow (1950) hexagon for the Navy, and a large blue Star of David in a bordered circle for the Air Force. The rank was renamed Rav Samal Rishon (1951–Present) and was equivalent to a British Army Warrant Officer I (Regimental Sergeant Major). The new rank also received new insignia made of metal: an Oak Leaf over a vertical Sword in a Laurel Wreath. It came in bronze-metal on a red enamel backing for the Army, gold-metal for the Navy, and silver-metal for the Air Force. It was worn on the lower right sleeve of the shirt or jacket or on a leather wrist strap when wearing short-sleeve order. It was divided into Rav Samal Rishon Miktzoi ("Specialist Chief Sergeant First Class"; a technical NCO) and Rav Samal Rishon Yekhidati ("Unit Chief Sergeant First Class"; a command NCO) from 1955 to 1958.

From 1948 to 1951, IDF Ranks for each branch of service (the Ground, Sea, and Air Forces) had unique titles and distinct insignia.

Rank insignia for the Navy and Air Force mirrored those of the Royal Navy and the Royal Air Force, respectively.

Synopsis of NATO code OF 1–10 to IDF ranks

Retrieved from "https://en.wikipedia.org/w/index.php?title=Israel_Defense_Forces_ranks&oldid=970788541"
Categories:
Hidden categories:
The article is a derivative under the Creative Commons Attribution-ShareAlike License. A link to the original article can be found here and attribution parties here. By using this site, you agree to the Terms of Use. Gpedia Ⓡ is a registered trademark of the Cyberajah Pty Ltd.