James M. "Jim" McPherson (born October 11, 1936) is an American Civil War historian, and is the George Henry Davis '86 Professor Emeritus of United States History at Princeton University. He received the 1989 Pulitzer Prize for Battle Cry of Freedom: The Civil War Era. McPherson was the president of the American Historical Association in 2003, and is a member of the editorial board of Encyclopædia Britannica. 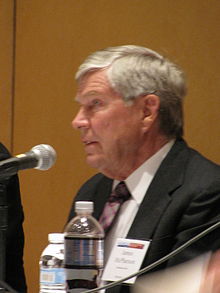 McPherson's works include The Struggle for Equality, awarded the Anisfield-Wolf Award in 1965. In 1988, he published his Pulitzer-winning book, Battle Cry of Freedom. His 1990 book, Abraham Lincoln and the Second American Revolution argues that the emancipation of slaves amounts to a second American Revolution. McPherson's 1998 book, For Cause and Comrades: Why Men Fought in the Civil War, received the Lincoln Prize.[2] In 2002, he published both a scholarly book, Crossroads of Freedom: Antietam 1862, and a history of the American Civil War for children, Fields of Fury.

McPherson published This Mighty Scourge in 2007, a series of essays about the American Civil War. One essay describes the huge difficulty of negotiation when regime change is a war aim on either side of a conflict. "For at least the past two centuries, nations have usually found it harder to end a war than to start one. Americans learned that bitter lesson in Vietnam, and apparently having forgotten it, we're forced to learn it all over again in Iraq." One of McPherson's examples is the American Civil War, in which both the Union and the Confederacy sought regime change. It took four years to end the war.[3]

There are all kinds of myths that a people has about itself, some positive, some negative, some healthy and some not healthy. I think that one job of the historian is to try to cut through some of those myths and get closer to some kind of reality. So that people can face their current situation realistically, rather than mythically. I guess that's my sense of what a historian ought to do.

— James M. McPherson, An exchange with a Civil War historian[4]

In 2009, he was the co-winner of the Lincoln Prize for Tried by War: Abraham Lincoln as Commander in Chief.[5]

McPherson was named the 2000 Jefferson Lecturer in the humanities by the National Endowment for the Humanities.[1][6][7] In making the announcement of McPherson's selection, NEH Chairman William R. Ferris said:

James M. McPherson has helped millions of Americans better understand the meaning and legacy of the American Civil War. By establishing the highest standards for scholarship and public education about the Civil War and by providing leadership in the movement to protect the nation's battlefields, he has made an exceptional contribution to historical awareness in America.[8]

Currently, McPherson resides in Princeton, New Jersey. He is married to Patricia[who?] and they have one child.[who?][1]

Along with several other historians, McPherson signed a May 2009 petition asking U.S. President Barack Obama not to lay a wreath at the Confederate Monument Memorial at Arlington National Cemetery. The petition stated:

Obama put the wreath on the monument anyway, winning the praise of the Sons of Confederate Veterans.[15]

Retrieved from "https://en.wikipedia.org/w/index.php?title=James_M._McPherson&oldid=953107484"
Categories:
Hidden categories:
The article is a derivative under the Creative Commons Attribution-ShareAlike License. A link to the original article can be found here and attribution parties here. By using this site, you agree to the Terms of Use. Gpedia Ⓡ is a registered trademark of the Cyberajah Pty Ltd.