The James Madison Memorial Building is one of three United States Capitol Complex buildings that house the Library of Congress. The building was constructed from 1971 to 1976, and serves as the official memorial to President James Madison. It is located between First and Second Streets SE on Independence Avenue, in Washington, DC. 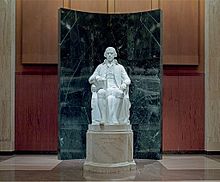 With the help of former Librarian of Congress Lawrence Quincy Mumford, plans for a third Library of Congress building were started in 1957. Congress appropriated planning funds for the structure in 1960, and construction was approved by an act of Congress on October 19, 1965 that authorized an appropriation of $75 million. The architect was John George Stewart (1890–1970, Architect of the Capitol. Excavation and foundation work began in June 1971, and work on the superstructure was completed in 1976. The cornerstone, inscribed with the date 1974, was laid on March 8, 1974. Dedication ceremonies were held on April 24, 1980, and the building actually opened on May 28, 1980. It was decided to name the building after Madison largely because he was the person who originally suggested in 1783 that the Continental Congress form a library containing a list of books that would be useful to legislators.

The Architect of the Capitol was charged with the responsibility for the construction of the Madison Building under the direction of the Senate and House Building Commissions and the Joint Committee on the Library. The Madison building was originally designed and constructed with the intent to store books, and only after completion did they decide to use the building as office space for Library of Congress officials. These bodies also consulted with a committee appointed by the American Institute of Architects and the James Madison Memorial Commission. The total authorization for construction eventually was increased to $130.675 million.

Designed by the firm of DeWitt, Poor, and Shelton Associated Architects, the James Madison Memorial Building is one of the three largest public buildings in the Washington D.C. metropolitan area (along with The Pentagon and the F.B.I.’s J. Edgar Hoover Building). The building contains 2.1 million square feet (200,000 m2) with 1.5 million feet (460,000 m) of assignable space. 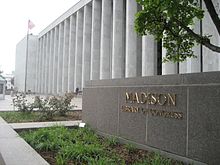 The Madison Building is home to many of the reading rooms of the Library of Congress:

Retrieved from "https://en.wikipedia.org/w/index.php?title=James_Madison_Memorial_Building&oldid=1002732389"
Categories:
Hidden categories:
The article is a derivative under the Creative Commons Attribution-ShareAlike License. A link to the original article can be found here and attribution parties here. By using this site, you agree to the Terms of Use. Gpedia Ⓡ is a registered trademark of the Cyberajah Pty Ltd.