The Japanese Alps (日本アルプス, Nihon Arupusu) is a series of mountain ranges in Japan which bisect the main island of Honshu. The name was coined by English archaeologist William Gowland, and later popularized by Reverend Walter Weston (1861–1940), an English missionary for whom a memorial plaque is located at Kamikōchi, a tourist destination known for its alpine climate. When Gowland coined the phrase, he was only referring to the Hida Mountains, but it now also applies to the Kiso Mountains and Akaishi Mountains.[2] 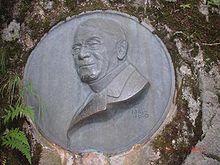 The Japanese Alps has a long history before William Gowland established this name. During the 1600s, people tried to discover the river valleys and to map road networks. However, the ridges had never been known and studied. As Kojima Usui later recalled, “in those days,... no one knew even the names of the mountains, much less their locations or elevations. To go mountaineering was literally to strike out into the unknown country.”[3] The first geological survey sheets were issued in 1890. The report mentioned major peaks, but the topography was mostly guesswork. After 1891, Travelers were able to find useful information in Basil Hall Chamberlain and W.B. Mason’s Handbook, but the information was written in English. However, for decades, the Japanese were climbing these mountains without a comparable guidebook. People did physical exploration over a decade in the 1890s. They divided the mountains into (north, central, and south) depending on how they were conventionally grouped. William Gowland, an English geologist, first thought of this swath of terrain as forming a single coherent landscape, comparable to the European Alps. Gowland's view was further developed by another Englishman and Christian missionary, Walter Weston, who was able “to canonize Gowland's geographical conception, deploying it as a de facto proper noun” [4]

Weston not only explored the same ranges that Gowland previously traversed, but also ascended the O Renge, Jonendake, Kasadake, Hodakayama, and other minor mountains. Weston first documented the two main mountain systems distinguishable by geological structure. The first of these he called the "China system" due to its connection with southeast China from just south of the Japanese archipelago. The second was called the "Karafuto system", due to the fact that it enters Japan from Karafuto to the north and runs southwest. These two were considered to be the first western explorers of the range, and as a result Weston, with the help of Gowland, popularized and documented different parts of the ranges in an incredibly in-depth manner for others to expand on.[5]

Japan is known as an island country in East Asia. The Japanese Alps are the largest nonvolcanic mountains located in Central Honshu Island. The volcanic peaks that tower over central Honshu have long been the object of veneration and pilgrimage. A leading proponent of mountain climbing in Japan would refer a decade later to "the majestically towering range that forms the Shinano-Hida border" as "the so-called 'Japanese Alps.[6] Shinano's mountains had long been exploited for raw materials, including timber, fuel, fertilizer, fodder, meat, minerals, and medicines. Most visitors came to the mountain for pilgrimage, especially to the Buddhist temple and the sacred peak of Mount Ontake.

Today, the Japanese Alps encompass the Hida Mountains (飛騨山脈), the Kiso Mountains (木曽山脈) and the Akaishi Mountains (赤石山脈). These towering ranges include several peaks exceeding 3,000 m (9,843 ft) in height, the tallest after Mount Fuji. The highest are Mount Hotaka at 3,190 m (10,466 ft) in north area and Mount Kita at 3,193 m (10,476 ft) in south area. Mount Ontake is well known as an active volcano, having erupted most recently in 2014.

Panorama of the mountains of the Japanese Alps. Photo is taken from Yatsugatake (September 2007)

Geographers previously believed that no active glaciers existed in Japan, but the Society of Snow and Ice in Tokyo found this to be false in May 2012. By studying surface flow velocity and snow patches in Mount Tsurugi, they found that certain perennial snow patches have large masses of ice, upwards of 30 meters in thickness. This causes these snow patches to be classified as active glaciers, and as of today there are three active glaciers in the Japanese Alps, and all of Japan.[7]

Retrieved from "https://en.wikipedia.org/w/index.php?title=Japanese_Alps&oldid=950417680"
Categories:
Hidden categories:
The article is a derivative under the Creative Commons Attribution-ShareAlike License. A link to the original article can be found here and attribution parties here. By using this site, you agree to the Terms of Use. Gpedia Ⓡ is a registered trademark of the Cyberajah Pty Ltd.