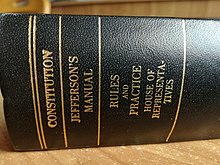 Book cover of the US constitution with the Jefferson's Manual

A Manual of Parliamentary Practice for the Use of the Senate of the United States, written by Thomas Jefferson in 1801, is the first American book on parliamentary procedure. As Vice President of the United States, Jefferson served as the Senate's presiding officer from 1797 to 1801. Throughout these four years, Jefferson worked on various texts and, in early 1800, started to assemble them into a single manuscript for the Senate's use. In December 1800 he delivered his manuscript to printer Samuel Harrison Smith, who delivered the final product to Jefferson on 27 February 1801.[1] Later, the House of Representatives also adopted the Manual for use in its chamber.

Jefferson's Manual was based on notes Jefferson took while studying parliamentary procedure at the College of William and Mary.[2] A second edition with added material by Jefferson was printed in 1812.[3]

The Manual is arranged in fifty-three categories from (1) The Importance of Adhering to Rules to (53) Impeachment. Each section includes the appropriate rules and practices of the British Parliament along with the applicable texts from the U.S. Constitution and the thirty-two Senate rules that existed in 1801.

The Senate traditionally has not considered Jefferson's Manual of Parliamentary Practice to be its direct authority on parliamentary procedure. However, starting in 1828 the Senate began publishing a version of Jefferson's Manual for their use, removing the Senate Rules from within the text and placing them in a separate section. In 1888, when the Senate initiated publication of the Senate Manual, a copy of the manual was included in each biennial edition. This practice continued until 1977.

In recent years, Jefferson's Manual has been cited to support the idea that state legislatures can initiate congressional impeachment proceedings. While precedent for an impeachment so initiated does exist, it still requires a direct proposition to impeach be made by a member of the House, who may incorporate the communication of the legislature in his or her remarks or any impeachment resolution submitted to the House.

It is commonly repeated that Thomas Jefferson wrote in Section 603 of his Manual of Parliamentary Practice for the Use of the Senate of the United States that “In the House there are various methods of setting an impeachment in motion,” including “by charges transmitted from the legislature of a State or territory." The source of this error is a misreading of the House of Representatives' House Rules and Manual, as disseminated online. That House document does contain the complete text of Jefferson's Manual, but it also includes commentary (and authorities for that commentary) on subsequent congressional practice. The assertion that state legislatures can initiate impeachment proceedings is part of the House Rules and Manual, but it was never part of Jefferson's own text. The House document (not Jefferson's Manual) labels this section “§603 Inception of Impeachment Proceedings in the House.” The House document is available online in both Text and PDF versions. The text version is the source of the misunderstanding, since Jefferson's words on impeachment and the congressional gloss are indistinguishable. In the PDF version, however, it is clear that Jefferson's Manual is printed in large font, while the subsequent commentary appears in smaller type. Jefferson's Manual in its original form, with its final Section LIII on “Impeachment” may also be viewed online.

The confusion of authorship, however, does not implicate the validity of the commentary or the precedents cited. As §603's notes make clear, the House has recognized the validity of an impeachment proceeding initiated by charges transmitted from the legislature of a state. (Hinds' Precedents of the House of Representatives of the United States, volume III, section 2469).[5]

Retrieved from "https://en.wikipedia.org/w/index.php?title=Jefferson%27s_Manual&oldid=938780110"
Categories:
Hidden categories:
The article is a derivative under the Creative Commons Attribution-ShareAlike License. A link to the original article can be found here and attribution parties here. By using this site, you agree to the Terms of Use. Gpedia Ⓡ is a registered trademark of the Cyberajah Pty Ltd.