The Courts of Jersey are responsible for the administration of justice in the Bailiwick of Jersey, one of the Channel Islands. They apply the law of the Island, which is a mixture of customary law and legislation passed by the legislature, the States Assembly.

The principal court is the Royal Court, which has been in existence since the 13th century, and exercises both civil and criminal jurisdiction. Additional courts, such as the Magistrate's Court, which deals with minor criminal matters, and the Court of Appeal, which hears appeals from the Royal Court, have been added to the Island's legal system more recently. There are also a number of specialist tribunals.

The Parish Hall Enquiry is an informal way of dealing with minor criminal behaviour, particularly by young people, which has been in use in Jersey for over 800 years.[1]

The Enquiry is not actually a court hearing. It is an opportunity for the Centenier (the head of the Honorary Police for the parish) to review the evidence and decide whether it is in the public interest for the case to be tried in the Magistrate's Court.[2] In doing so the Centenier will discuss the evidence with the accused person and, if the offence is minor, possibly agree a non-statutory sanction which will avoid the need for the case to go to court. Attendance at the Enquiry is voluntary, the Centenier does not make a finding of guilt (a sanction is only imposed if the accused agrees, otherwise the case is sent on to the Magistrate's Court) and at any time the accused may elect to have the case referred to the Magistrate.[1][3]

Sanctions which can be imposed include:[1]

These sanctions are not convictions but a record is kept and they may be referred to in the event of the accused coming into contact with the criminal justice system on a subsequent occasion.[1]

The Parish Hall Enquiry system has been found to "deal successfully and appropriately with a wide range of offending", to have a low rate of recidivism, and a high level of satisfaction amongst victims.[4]

The Magistrate's and Petty Debts Courts were established by legislation in 1853 to deal with minor criminal and civil cases instead of the Royal Court (although their jurisdiction is generally concurrent with that of the Royal Court, rather than exclusive).[5] They are both presided over by the Magistrate, a position which was created as a distinct post in 1864. The Magistrate is referred to in the Jersey French of the legislation as the Juge d’Instruction,[6] although his role is not the same as the position with the same title in inquisitorial systems.

The Petty Debts Court deals with civil cases where the value of the claim is no more than £10,000, and also with landlord and tenant disputes.[8][9]

The Youth Court was created in 1994 and is made up of the Magistrate and two members of the Youth Court Panel (which is appointed by the Superior Number of the Royal Court). It sits in private (although the press may be present) and deals with cases where the defendant is aged under 18, unless the likely sentence means that the case needs to be sent to the Royal Court.[10] 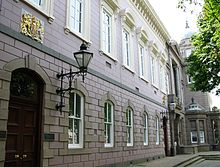 The Royal Court is the principal and oldest court in Jersey, and exercises both criminal and civil jurisdiction. It can sit in a number of configurations, depending on the type of case and the powers to be exercised.[11]

The Court has its origins in the 13th century when, following the English Crown's loss of those portions of the Duchy of Normandy which are on the European mainland, King John decreed that Jersey should continue to be subject to Norman customary law. The Royal Court exercised both judicial and legislative functions for the Island, although the power to make laws moved to the States Assembly in the 15th century.[12]

The Bailiff of Jersey is the President of the Royal Court (and also of the Court of Appeal). Individual trials may be heard before the Bailiff, the Deputy Bailiff (also a full-time role) or a Commissioner. Commissioners are part-time judges, appointed from the ranks of judges in the Commonwealth or senior experienced lawyers from the Channel Islands, United Kingdom or the Isle of Man, either for defined periods of time or for specific cases. The Master of the Royal Court deals with some preliminary matters in civil cases. The Court is supported by the Judicial Greffier who fulfils the role of Registrar.[11]

In addition to the judge, the Royal Court includes the Jurats. They are unpaid lay people, aged 40 or more, who have been elected by an electoral college. They hold the office until the age of 72.[13] The Jurats decide issues of fact in criminal and civil trials (except criminal assizes, when a jury is empanelled), hand down sentences in criminal trials and award damages in civil trials.[14]

Three divisions of the Court deal solely with civil matters. The Héritage division decides cases concerning land and immovable property. The Family division deals with divorce, adoption and the care of children. The Probate division is concerned with wills and inheritance.[11]

The Samedi division deals with all other civil cases coming before the Royal Court.[15] It previously sat on a Saturday, hence the name (Samedi is the French word for Saturday), but now sits on Fridays.[11]

When exercising civil jurisdiction, the Royal Court almost always sits as the Inferior Number – that is, comprising the Bailiff (or the Deputy Bailiff, or a Commissioner) and two Jurats.[16]

Interior of Royal Court looking from the public gallery

The Inferior Number of the Royal Court tries offences (termed 'contraventions') defined in statute law or (where the defendant agrees) offences against customary law. It also deals with bail applications. When sitting as the Inferior Number, the Court is made up of the Bailiff (or the Deputy Bailiff, or a Commissioner) and two Jurats. There is no jury, and the Jurats are the judges of fact.[18] The Inferior Number may hand down a sentence of up to four years imprisonment. If it believes that a heavier sentence is appropriate, it must refer the case to the Superior Number for sentencing.

The Inferior Number also hears appeals against decisions of the Magistrates' Court. There is generally no onward appeal.[19]

An assize sitting of the Royal Court is used when the defendant is charged with an offence (called 'crimes' for the more serious offences, and 'délits' for the less serious ones) against customary law. The case is tried by a judge (the Bailiff or Deputy or a Commissioner) and a jury of 12 citizens.[19]

HM Solicitor-General presents argument before the Royal Court, voyeurs and officials regarding whether the Parish of Saint Helier could remove dead trees at risk of falling into the roadway (2012)

A Visite Royale is an annual ambulatory inspection by the Royal Court of one of the Parishes of Jersey. Since 1803 the alternation of the Visites has been fixed so that each Parish is visited once every six years. The origin of the custom goes back to the jurisdiction of the Viscount over the roads and paths of the Duchy of Normandy. The Court inspects the Parish accounts (although since modern practice is that accounts are professionally audited, this is a formality) and receives a report on policing and other matters from the Connétable and Chef de Police. A panel of twelve voyeurs, made up of notable Parishioners nominated by the Connétable, is sworn in and leads the Court on a circuit of roads around the Parish, drawing the Court's attention along the way to transgressions and encroachments that require judgment. The jurisdiction of the Visite Royale is to make "any order designed to ensure the rights of the public lawfully to use the public roads and pathways of the Island without obstruction, hinderance or inconvenience."[20] Judgment is given on the spot, although this may be an order that further investigations should take place and be reported to the Royal Court at a later date.[21]

Prior to 1949 there was no Court of Appeal in Jersey (or Guernsey). Appeals could be heard by the Judicial Committee of the Privy Council, but this was only possible if special leave was given and was not by right. It was felt that, particularly in criminal cases, this was not satisfactory. Therefore, in 1949 an Order in Council was made by King George VI creating the Channel Islands Court of Appeal, to deal with appeals from both Jersey and Guernsey. However it was soon realised that a joint court would not work and the Channel Islands Court of Appeal never sat. It was ultimately replaced by separate Courts of Appeal in each of the two bailiwicks.[22]

The Court of Appeal

The Youth Appeal Court is made up of the Bailiff and three members of the Youth Court Panel.[26]

Judicial Committee of the Privy Council

Further appeals can be made to the Judicial Committee of the Privy Council, but only with special leave.[27]

In the case of a sudden or unexpected death in the Island, an inquest will need to be held to determine the cause of death. The Viscount is the coroner (although in recent years this function has been delegated to the Deputy Viscount) and may sit with a jury, although this is unusual. Hearings take place in public.[28]

In addition to the courts, there are a number of Tribunals, including:

Retrieved from "https://en.wikipedia.org/w/index.php?title=Courts_of_Jersey&oldid=935154255#Appeal_courts"
Categories:
Hidden categories:
The article is a derivative under the Creative Commons Attribution-ShareAlike License. A link to the original article can be found here and attribution parties here. By using this site, you agree to the Terms of Use. Gpedia Ⓡ is a registered trademark of the Cyberajah Pty Ltd.