Johan Ludvig Runeberg (Finland Swedish: [ˈjuːhɑn ˈlʉdːviɡ ˈrʉːnebærj]; 5 February 1804 – 6 May 1877)[1] was a Finland-Swedish Lutheran priest, lyric and epic poet. He is the national poet of Finland and the author of the lyrics to Vårt land (Our Land, Maamme in Finnish) that became the Finnish National Anthem. Runeberg was also involved in the modernization of the Finnish Lutheran hymnal and produced many texts for the new edition.[2][3] 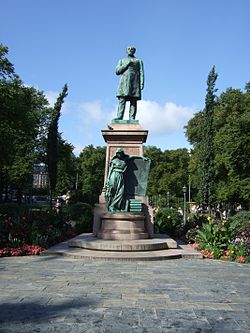 Statue of Johan Ludvig Runeberg on Esplanadi in Helsinki, Finland

Runeberg was born into a Swedish-speaking family in Jakobstad, on the shores of the Gulf of Bothnia. At the age of eight, Runeberg was sent to live with his uncle and attend school in Oulu. Runeberg studied in the city of Vaasa, later on at the Imperial Academy of Turku, where he befriended Johan Vilhelm Snellman and Zacharias Topelius. His studies concentrated mainly on the classical languages of Latin and Greek. He earned a Master of Philosophy during 1827. He served as a tutor (1822–1826), docent at the Imperial Alexander University (1830) and teacher at the Swedish-language Helsingfors Lyceum (1831–1836). From 1837 he lived in Porvoo, where he served as professor of Latin literature in the Gymnasium of Porvoo. Finnish salon hostess Natalia Castrén (1830–1881) was a member of his cultural circle.[4][5]

Many of his poems deal with life in rural Finland. The best known of these is Bonden Paavo, (Farmer Paavo, Saarijärven Paavo in Finnish), about a smallholding peasant farmer in the poor parish of Saarijärvi and his determination, "sisu" (guts) and unwavering faith in providence in the face of a harsh climate and years of bad harvests. Three times, a frosty night destroys his crops. Every time, he mixes double the amount of bark into his bark bread to stave off starvation and works ever harder to dry off marsh into dryer land that would not be as exposed to the night frost. After the fourth year, Paavo finally gets a rich crop. As his wife exults, thanks God and tells Paavo to enjoy full bread made entirely out of grain, Paavo instructs his wife to mix bark into grain once more, because their neighbour's crop has been lost in a frost and he gives half of his crop to the needy neighbour.[6][7]

Runeberg's main works included the idealist poem Älgskyttarna (Elk Hunters, 1832) and the epic Kung Fjalar (King Fjalar, 1844). The heroic poem Fänrik Ståls Sägner (The Tales of Ensign Stål, Vänrikki Stoolin tarinat in Finnish) written between 1848 and 1860 is considered the greatest Finnish epic poem outside the native Kalevala tradition and contains tales of the Finnish War of 1808–09 with Russia. In the war, Sweden ignominiously lost Finland, which became a Grand Duchy in the Russian Empire. The epic, which is composed episodically, emphasizes the common humanity of all sides in the conflict, while principally lauding the heroism of the Finns. The first poem Vårt land (Our Land, Maamme in Finnish) became the Finnish National Anthem.[8][9]

He was married to his second cousin Fredrika Runeberg, née Tengström, who wrote poems and novels. They were the parents of eight children, including the sculptor Walter Runeberg, who was their eldest son.[10][11]

Runeberg Day (Runebergin päivä) is celebrated annually on 5 February, the day of Runeberg's birth. A pastry flavored with almonds called Runeberg's torte (Finnish: Runebergintorttu; Swedish: Runebergstårta) is generally available in stores from the beginning of January until 5 February.[12]

There is a statue of Johan Ludwig Runeberg by his son Walter Runeberg on Esplanadi in the heart of Helsinki.[13]

The Runeberginkatu street in central Helsinki is named after him.[14]

Runeberg was selected as the main motif of the Finnish commemorative coin, the €10 Johan Ludvig Runeberg and Finnish Poetry commemorative coin. It was minted in 2004 celebrating the 200th anniversary of his birth. The obverse of the coin features a stylized portrait of Runeberg's face. The reverse features an 1831 font sample from the Swedish language newspaper Helsingfors Tidningar, since Runeberg wrote most of his work in Swedish.[15]

Retrieved from "https://en.wikipedia.org/w/index.php?title=Johan_Ludvig_Runeberg&oldid=1000566858"
Categories:
Hidden categories:
The article is a derivative under the Creative Commons Attribution-ShareAlike License. A link to the original article can be found here and attribution parties here. By using this site, you agree to the Terms of Use. Gpedia Ⓡ is a registered trademark of the Cyberajah Pty Ltd.