John Anthony Barrasso III (/bəˈrɑːsoʊ/; born July 21, 1952) is an American physician and politician serving as the junior United States Senator from Wyoming. A member of the Republican Party, he previously served in the Wyoming State Senate.

Born and raised in Reading, Pennsylvania, Barrasso graduated from Georgetown University, where he received both his B.S. and M.D. He conducted his medical residency at Yale University before moving to Wyoming and beginning a private orthopedics practice in Casper, Wyoming. Barrasso was active in various medical societies and associations.

Barrasso initially ran for the U.S. Senate in the 1996 election, narrowly losing the Republican primary to Mike Enzi. In 2002, he won election to the State Senate, where he stayed until his appointment to the U.S. Senate after the death of incumbent Craig L. Thomas. He was elected in 2008, and reelected in 2012 and 2018. In 2018, Barrasso was selected as chair of the Senate Republican Conference.[1]

Barrasso is currently the most senior junior Republican in the Senate. He will become the state's senior Senator and dean of the Wyoming congressional delegation when Enzi retires in 2020.

Barrasso was born in Reading, Pennsylvania in 1952, the son of Louise M. (née DeCisco) and John Anthony Barrasso, Jr. He is of Italian descent.[2] He is a 1970 graduate of the former Central Catholic High School, which, in 2011, combined with Holy Name High School to form Berks Catholic High School, in Reading, Pennsylvania.[citation needed] Barrasso began his college career at Rensselaer Polytechnic Institute (where he became a member of Phi Kappa Tau fraternity) and transferred to Georgetown University in Washington, D.C., graduating in 1974 with a bachelor of science degree in biology. He also received his M.D. degree from Georgetown University School of Medicine in 1978. He conducted his residency at Yale Medical School in New Haven, Connecticut.

In 1983, following the completion of his residency at Yale, Barrasso moved to Wyoming, together with his wife at the time, Linda Nix.[3] He joined a private orthopedic practice in Casper, Wyoming, and for a time served as chief of staff of the Wyoming Medical Center.[3] He served as State President of the Wyoming Medical Society, President of the National Association of Physician Broadcasters, and as a member of the American Medical Association Council of Ethics and Judicial Affairs.

Barrasso was also a rodeo physician for the Professional Rodeo Cowboy's Association (and a member of the "Cowboy Joe Club") and volunteered as a team physician for Casper College as well as several local high schools.[4] He was named the "Wyoming Physician of the Year". In addition, he was awarded the "Medal of Excellence" by the Wyoming National Guard for his services to the National Guard, and received the "Legislative Service Award" from the Veterans of Foreign Wars (VFW) for his support of Wyoming's veterans.

Barrasso was a board-certified orthopedic surgeon in private practice in Casper for 24 years, from 1983 until 2007.[4][5]

Barrasso ran unsuccessfully for the Republican nomination for the U.S. Senate in 1996 for the seat being vacated by Republican Alan K. Simpson. Barrasso lost the primary election to State Senator Mike Enzi, 32% to 30%, in a nine-candidate election.[6]

During his time in the State Senate he served as Chairman of the Transportation and Highways Committee.[9] 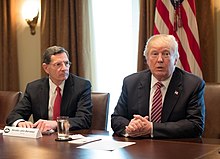 Barrasso with President Donald Trump in 2018

Barrasso was chosen on June 22, 2007, by Democratic Governor Dave Freudenthal to replace Senator Craig L. Thomas, who died earlier in the month. Under state law, Freudenthal was able to consider only three individuals whose names were submitted to him by the Republican State Central Committee because the seat was vacated by a Republican. The others were former State Treasurer Cynthia Lummis of Cheyenne, later Wyoming's only member of the United States House of Representatives, and former Republican State Chairman and lobbyist Tom Sansonetti, a former aide to Thomas. Matt Mead, grandson of former Senator Clifford P. Hansen, had also sought the nomination but was eliminated by the central committee in fourth place. So had the previous gubernatorial nominee from 2006, Ray Hunkins, a Wheatland rancher and lawyer. Mead later went on to be elected Governor of Wyoming in 2010, and Lummis was elected to Congress in 2008. When he was appointed, Barrasso indicated that he would also run in the November 2008 special election to fill the remainder of Thomas' term.

Barrasso announced on May 19, 2008, that he would run in the general election in 2008 to serve the remainder of Thomas' term, though he had already stated that intention before his appointment. Tom Sansonetti, one of the three Republican candidates selected for consideration by Freudenthal, said he would not challenge Barrasso in the primary. The other candidate for selection, Cynthia Lummis, was a candidate for the Republican nomination to replace retiring U.S. Representative Barbara Cubin for the state's at-large seat in the U.S. House of Representatives. The filing deadline in Wyoming was May 30, 2008, and ultimately Barrasso did not face a primary opponent. The Democratic nominee was Nick Carter, a lawyer from Gillette. Pundits unanimously rated the race "Safe Republican." As expected, Barrasso won the general election in a landslide, garnering 73% of the vote.

Barrasso ran for re-election to a first full term in 2012. He faced three opponents for the Republican nomination, which he won with 90% of the vote. In the general election, he faced Democratic nominee Tim Chestnut, a member of the Albany County Board of Commissioners. Barrasso won the election with 76% of the vote.

Barrasso won re-election with 67% percent of the vote, the lowest percentage of his three U.S. Senate campaigns and the closest a Democrat came to winning the U.S. Senate seat since the 1996 election.

At the time of his temporary appointment to the U.S. Senate for Wyoming in 2007, Barrasso was quoted as saying on his application: "I believe in limited government, lower taxes, less spending, traditional family values, local control and a strong national defense"; he also said that he had "voted for prayer in schools, against gay marriage and [had] sponsored legislation to protect the sanctity of life".[10]

In 1996, when Barrasso ran for the Republican nomination for U.S. Senate for Wyoming he presented himself during the primary as a candidate in favor of abortion rights.[11][3] Subsequently, during his tenure in the Wyoming Legislature, he sponsored an unsuccessful bill to treat the killing of a pregnant woman as a double homicide.[3] He has voted to prohibit federal funding for abortion.[12]

In 2002, he received an "A" rating from the National Rifle Association. According to a Washington Post survey, he has voted with Republicans 94 percent of the time.[citation needed]

In April 2013, Barrasso was one of 46 senators to vote against the passing of a bill which would have expanded background checks for all gun buyers. Barrasso voted with 40 Republicans and 5 Democrats to stop the bill.[13]

Barrasso voted against the Affordable Care Act (Obamacare) in December 2009,[14] and he voted against the Health Care and Education Reconciliation Act of 2010.[15] Barrasso was part of the group of 13 Senators drafting the Senate version of the AHCA behind closed doors.[16][17][18][19]

Barrasso opposed the CIA's creation of its Center on Climate Change and National Security in 2009.[20] In 2011, Barrasso introduced a bill that would prevent the Environmental Protection Agency from limiting carbon dioxide emissions.[21]

Barrasso denies anthropogenic climate change.[22] Asked in 2014 on the C-SPAN interview program Newsmakers if human activity contributes to climate change, Barrasso said, "The climate is constantly changing. The role human activity plays is not known."[23][24][25] As of January 2019 Barrasso has a 8% lifetime score on the National Environmental Scorecard of the League of Conservation Voters.[26][27] Barrasso was a leading critic of the climate change policies of the administration of US President Barack Obama.[28]

Along with Pat Roberts and Mike Enzi, Barrasso introduced a bill to remove tax credits for electric cars.[29] In December 2018, he penned an op-ed in the New York Times stating his belief in climate science and climate change, but opposition to a carbon fee and dividend.[30]

Barrasso co-authored and was one of 22 senators to sign a letter[31] to President Donald Trump urging the President to have the United States withdraw from the Paris Agreement. According to the Center for Responsive Politics, Barrasso has received over $585,000 from the oil and gas industry since 2012.[32] In 2018 alone Barrasso received over $690,000 in funding from oil and gas companies.[33]

In 2019, Barrasso inaccurately claimed that "livestock will be banned" as a result of the Green New Deal, and said we needed to "say goodbye to dairy, to beef, to family farms, to ranches. American favorites like cheeseburgers and milkshake would become a thing of the past."[34]

He opposed the FIRST STEP Act, legislation which sought to reform the federal prison system. Nonetheless, the bill passed 87-12 on December 18, 2018.[35]

Barrasso opposed the Russian-backed Nord Stream 2 — a pipeline for delivering natural gas from Russia to Germany. Bloomberg News reported that "Congress brought forward bills authorizing the administration to levy sanctions against a consortium of five European energy companies that have partnered with [Russia's main gas company] Gazprom; at least one bill, sponsored by Republican Senator John Barrasso, would make them mandatory."[36]

After it was revealed in November 2018 that President Donald Trump had business dealings with Russia while a candidate during the 2016 election, Barrasso said, "The president is an international businessman; I’m not surprised he was doing international business." Asked if Trump should have disclosed those business ties to voters during the campaign, Barrasso said, "There were so many things involved in the 2016 campaign, it’s hard to point to what one thing influenced voters."[37][38] Barrasso joined President Donald Trump on Thanksgiving 2019 in a surprise visit to American troops stationed at Bagram Air Base in Afghanistan. Approximately 370 are Wyoming National Guard soldiers."[39]

Barrasso has three children: Peter, Emma, and Hadley. He is divorced from Linda Nix. Barrasso is married to his second wife, Bobbi Brown.[41][42] On August 11, 2007, during Cheyenne's annual Race for the Cure, Barrasso and Brown, herself a breast cancer survivor and at the time, the state director for Barrasso's state senate offices, announced that they would marry. Once the two were engaged, Brown resigned her position in Barrasso's state Senate offices.[43] They were married on January 1, 2008, with their children in attendance in Thermopolis.[44]

Retrieved from "https://en.wikipedia.org/w/index.php?title=John_Barrasso&oldid=963008710"
Categories:
Hidden categories:
The article is a derivative under the Creative Commons Attribution-ShareAlike License. A link to the original article can be found here and attribution parties here. By using this site, you agree to the Terms of Use. Gpedia Ⓡ is a registered trademark of the Cyberajah Pty Ltd.