Students of the Basic Tactical Operations Course at the Joint Maritime Training Center aboard Marine Corps Base Camp Lejeune fire Sig Sauer P229s at the range.

In November 1998 PSU TRADET relocated to Marine Corps Base Camp Lejeune, North Carolina and by the summer of 2001 its mission had expanded to include non-lethal weapons and the Fast Boat Center of Excellence, as well as conducting training for cutter small boats over-the-horizon tactics designed to enhance interdiction abilities in counter narcotics operations. After the terrorist attacks of 11 September 2001, the PSU TRADET began training the newly created Coast Guard Maritime Safety and Security Teams (MSSTs).

The unit grew and evolved to accommodate the broadened responsibilities and growing inter-agency and international training requests. In August 2002, the name of the command changed to Coast Guard Special Missions Training Center (SMTC) to better incorporate its multi-faceted capabilities. SMTC was commissioned as a Headquarters unit on 29 July 2003.

In 2008, SMTC completed the move to four new buildings within Courthouse Bay, and the unit was renamed for the second time as the Joint Maritime Training Center (JMTC) to more accurately reflect the unit's diverse range of multi-service military personnel and training center.[3] 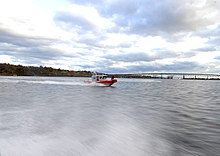 The Logistics Department, part of the Engineering and Logistics Division, provides the support, supplies and maintenance for all activities at JMTC. Procurement and contracting are done through various sources including those used by Marine Corps Base Camp Lejeune as well as UNICOR, General Services Administration and commercial vendors. The Engineering Division handles all of the aspects of the vehicle and boat maintenance from routine preventative maintenance to ordering parts for vehicles used during training.

The Fast Boat Division provides standardized, safe and relevant fast boat tactics and training to students. Inherent in this mission is the requirement for knowledgeable instructors, who maintain proficiency in the most up-to-date fast boat tactics, techniques and procedures for all US Coast Guard, US Navy, and US Marine Corps small boats. Within the Fast Boat Division, there are two sections: the Tactical Coxswain section, which instructs Navy Mobile Security Forces (NMSF), Maritime Safety and Security Teams (MSST), and Port Security Unit (PSU) coxswains, and the Cutter Boat Over-the-Horizon (CB-OTH) section, which teaches counter-narcotic operations to the cutter fleet.

Retrieved from "https://en.wikipedia.org/w/index.php?title=Joint_Maritime_Training_Center&oldid=915100815"
Categories:
Hidden categories:
The article is a derivative under the Creative Commons Attribution-ShareAlike License. A link to the original article can be found here and attribution parties here. By using this site, you agree to the Terms of Use. Gpedia Ⓡ is a registered trademark of the Cyberajah Pty Ltd.