A joint session of the United States Congress is a gathering of members of the two chambers of the bicameral legislature of the federal government of the United States: the Senate and the House of Representatives. Joint sessions can be held on any special occasion, but are required to be held when the president delivers a State of the Union address, when they gather to count and certify the votes of the Electoral College following a presidential election, or when they convene on the occasion of a presidential inauguration. A joint meeting is a ceremonial or formal occasion and does not perform any legislative function; and no resolution is proposed or vote taken.

Joint sessions and meetings are usually held in the Chamber of the House of Representatives, and are traditionally presided over by the speaker of the House. However, the Constitution requires the vice president (as president of the Senate) to preside over the counting of electoral votes.

The Twelfth Amendment provides that the vice president, in their capacity as President of the Senate, receives the Electoral College votes, and then, in the presence of the Senate and House of Representatives, opens the sealed votes. The votes are then counted.[1] As mandated by the 1887 Electoral Count Act, the votes are counted during a joint session on January 6 in the calendar year immediately following the meetings of the presidential electors. The act also specifies that the president of the Senate presides over the session.[2] The Twentieth Amendment now provides that the newly elected Congress counts the votes. Until 1936, the outgoing Congress counted the electoral votes.

The joint session to count electoral votes is held at 1:00 p.m. Eastern time on January 6 in the Chamber of the House of Representatives.[2] The sitting vice president is expected to preside, but in several cases the president pro tempore of the Senate has chaired the proceedings instead. The vice president and the speaker of the House sit at the podium, with the vice president in the seat of the speaker of the House. Senate pages bring in the two mahogany boxes containing each state's certified vote and place them on tables in front of the senators and representatives. Each house appoints two tellers to count the vote (normally one member of each political party). Relevant portions of the Certificate of Vote are read for each state, in alphabetical order. Members of Congress can object to any state's vote count, provided that the objection is supported by at least one member of each house of Congress. A successful objection will be followed by debate; however, objections to the electoral vote count are rarely raised, although it did occur during the vote count in 2001 after the close 2000 presidential election between George W. Bush, then governor of Texas, and Al Gore, then vice president of the United States. Vice President Gore, who as vice president was required to preside over his own Electoral College defeat (by five electoral votes), denied the objections, all of which were raised only by several House members and would have favored his candidacy, after no senators would agree to jointly object. If there are no objections or all objections are overruled, the presiding officer declares the result of the vote and states who is elected president and vice president. The senators then depart from the House Chamber.

State of the Union

At some time during the first two months of each session, the president customarily delivers the State of the Union address, a speech in which an assessment is made of the state of the country, and the president's legislative agenda is outlined. The speech is modeled on the Speech from the Throne, given by the British monarch. There is a major difference, in that the president is the principal author of his own State of the Union address, while the Speech from the Throne is customarily written by the prime minister.

The Constitution of the United States requires that the president "shall from time to time give to the Congress Information of the State of the Union," but does not specify whether the information should be given in a speech or a written report. The first two presidents, George Washington and John Adams, delivered the speech in person before both houses of Congress, but that practice was discontinued by Thomas Jefferson, who considered it too monarchical and sent written reports instead. Written reports were standard until 1913, when Woodrow Wilson reestablished the practice of personally attending to deliver the speech. Since then, on a number of occasions presidents have presented a written report, usually for medical reasons.[3]

Subjects of joint sessions and meetings

In addition to State of the Union addresses, inaugurals and counting of electoral votes, joint sessions or meetings usually fall into one of several topics. 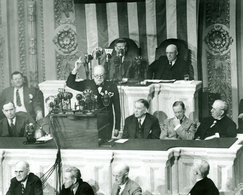 Pope Francis addresses Congress in 2015. Behind him are Vice President Biden and Speaker Boehner.

Joint meetings have been held more than a hundred times to enable foreign heads of state or heads of government to address Congress. Leaders of 48 countries have addressed Congress at a joint meeting: France leads the list with nine joint meeting addresses by heads of state or dignitaries. Other leading countries are: Israel (8), United Kingdom (8), Mexico (7), India (6), Italy (6), Ireland (6), South Korea (6), Germany, including West Germany and unified Germany (5), Australia (4), Canada (3), Argentina (3), and the Philippines (3). Prime Minister of Israel Benjamin Netanyahu and Prime Minister of the United Kingdom Winston Churchill have each made three joint addresses to Congress, more than any other foreign dignitaries (Netanyahu: 1996,[4] 2011,[5] 2015;[6] Churchill: 1941, 1943, 1952). Prime Minister of Israel Yitzhak Rabin addressed joint meetings of Congress on two occasions (1976 and 1994) as did Nelson Mandela of South Africa (1990 and 1994).[7]

The first foreign dignitary to address a joint session of Congress was Ambassador André de La Boulaye of France who addressed a joint session on May 20, 1934 to memorialize the centennial anniversary of the death of Marquis de Lafayette.[8] The first non-dignitary to address a joint meeting of Congress was Polish Solidarity leader Lech Wałęsa in 1989. Nelson Mandela, then deputy president of the African National Congress addressed a joint meeting in 1990.[9]

John Howard, prime minister of Australia, had originally been scheduled to address Congress on September 12, 2001, but his address was postponed due to the September 11 terrorist attacks the previous day. Howard's address was rescheduled for June 12, 2002 where he spoke about the attacks he had witnessed 9 months earlier. Howard was acknowledged with a standing ovation and describes the occasion as a "moving moment."[10]

The most recent addresses by foreign dignitaries were given by French President Emmanuel Macron on April 25, 2018, Indian Prime Minister Narendra Modi on June 8, 2016, and Pope Francis on September 24, 2015. The Pope did not address the joint session as a religious dignitary but as a head of state.[11]

All foreign heads of state and heads of government are presented officially to Congress in the same manner as the president during the State of the Union Address and are introduced by the speaker by their diplomatic style of address, followed by their name and respective office.

In addition to a State of the Union address, presidents address Congress on specific subjects. The first such speech was delivered by John Adams on the subject of U.S. relations with France. The most popular subjects for such addresses are economic, military and foreign policy issues.

In addition to bringing back the tradition of delivering a State of the Union address, Woodrow Wilson was the first president since John Adams to address Congress on specific topics. He delivered 17 such speeches, more than any other president.

Joint meetings are sometimes called to hear addresses by generals, admirals, or other military leaders. Perhaps the most notable example is Douglas MacArthur's farewell address to Congress. In concluding the speech he recalled an old army song which contained the line "old soldiers never die; they just fade away". He then said, "And like the old soldier of that ballad, I now close my military career and just fade away, an old soldier who tried to do his duty as God gave him the light to see that duty. Good-bye".

Six times in the first years of the Space Age, Congress jointly met to be addressed by astronauts after their trips in space.

Nine times, Congress has jointly met to hold a memorial service for a deceased president or former president. Congress has also met to memorialize Vice President James Sherman and the Marquis de Lafayette.

Congress sometimes meets to mark the anniversary of a historical event or of a presidential birthday. The first such occasion was the centennial of George Washington's first inauguration in 1789. Congress has met to mark the centennial of the birth of each president since Franklin Delano Roosevelt, with the exception of Lyndon Johnson.

FDR's Pearl Harbor Speech. Behind him are Vice President Wallace and Speaker Rayburn (audio only)

Retrieved from "https://en.wikipedia.org/w/index.php?title=Joint_session_of_the_United_States_Congress&oldid=980054632"
Categories:
Hidden categories:
The article is a derivative under the Creative Commons Attribution-ShareAlike License. A link to the original article can be found here and attribution parties here. By using this site, you agree to the Terms of Use. Gpedia Ⓡ is a registered trademark of the Cyberajah Pty Ltd.