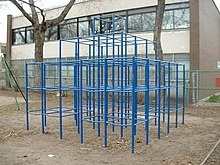 The jungle gym, also called monkey bars or climbing frame, is a piece of playground equipment made of many pieces of material, such as metal pipe or rope, on which participants can climb, hang, sit, and in some configurations slide.

The first jungle gym was invented in 1920 and patented by lawyer Sebastian Hinton, in Chicago.[1] It was sold under the trademarked name Junglegym. The term "monkey bars" appears at least as far back as the 1930s,[2][3] though Hinton's initial patent of 1920 appeals to the "monkey instinct" in claiming the benefits of climbing as exercise and play for children,[4] and his improvement patents later that year refer to monkeys shaking the bars of a cage, children swinging on a "monkey runway", and the game of "monkey tag".[5] Hinton's father, mathematician Charles Hinton, had built a similar structure from bamboo when Sebastian Hinton was a child; his father's goal was to enable children to achieve an intuitive understanding of 3-dimensional space through a game in which numbers for the x, y, and z axes were called out, and each child tried to be the first to grasp the indicated junction. Thus, the abstraction of Cartesian coordinates could be grasped as a name of a tangible point in space.[6]

Large, metal, geometric-shaped jungle gyms were once common on playgrounds, but they sometimes led to injuries when children hit their heads on the bars or swung on them improperly, causing bruises, sprains, and fractures. Newer jungle gyms are often made of alternative materials, including PVC, other plastics, rope varieties, wood/pipe, and other materials. Non-metallic jungle gyms have the advantage of being comfortable to touch even on a very hot or cold day, because they do not get too hot or cold. Jungle gyms and monkey bars made of PVC and plastic flex when struck,[citation needed] absorbing the impact better than more-rigid metal models. Moreover, PVC and plastic will not rust.

Jungle gym shapes may include wooden platforms with ladders and railings around the outer edges. A variety of shapes are seen in school playgrounds, parks, and backyards, including geodesics, rocket-shaped structures, and other configurations.

One common type of jungle gym is a row of overhead bars, high enough for a child to hang from, but not so high as to cause serious injury in a fall. A child can swing hand-over-hand from one end to the other, or hang upside down from the bars by the back of the knees.

A newer, modern version, of the jungle gyms for home use also exist. They are made from wood or steel. Wooden sets are typically a bit bulky but are pleasant to touch. Metal-framed jungle gyms have another advantage - they have a significantly smaller footprint and, in some cases, are a lot sturdier than the wooden ones. Metal-framed jungle gyms for home use are also available which is perfect for homes with different ceiling heights.

Some even have a non-toxic rubber coating as well as nerve-stimulating massage steps.

To reduce the risk of injury from falls, jungle gym areas often have a thick layer of woodchips or other impact-absorbing material covering the ground. The US National Safety Council recommends that playgrounds have at least 12 inches (30 cm) of such material.[8]

Retrieved from "https://en.wikipedia.org/w/index.php?title=Jungle_gym&oldid=932255545"
Categories:
Hidden categories:
The article is a derivative under the Creative Commons Attribution-ShareAlike License. A link to the original article can be found here and attribution parties here. By using this site, you agree to the Terms of Use. Gpedia Ⓡ is a registered trademark of the Cyberajah Pty Ltd.