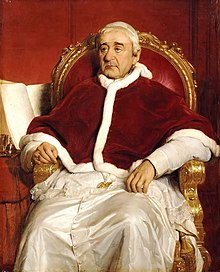 KU Leuven[1] is a research university in the Dutch-speaking city of Leuven in Flanders, Belgium. It conducts teaching, research, and services in the natural sciences, engineering, humanities, medicine, law, business, and social sciences.[2]

In addition to its main campus in Leuven, it has satellite campuses in Kortrijk, Antwerp, Ghent, Bruges, Ostend, Geel, Diepenbeek, Aalst, Sint-Katelijne-Waver, and in Belgium's capital Brussels.[3] KU Leuven is the largest university in Belgium and the Low Countries. In 2017–18, more than 58,000 students were enrolled. Its primary language of instruction is Dutch, although several programs are taught in English, particularly graduate degrees.[4][5]

KU Leuven consistently ranks among the top 100 universities in the world by major ranking tables. As of 2020, it ranks 45th in the Times Higher Education rankings, 80th according QS World University Rankings, 85th according the Shanghai Academic Ranking of World Universities,[6][7][8] For four consecutive years starting in 2016, Thomson Reuters ranked KU Leuven as Europe's most innovative university,[9] with its researchers having filed more patents than any other university in Europe; its patents are also the most cited by external academics.

Although Catholic in heritage, KU Leuven operates independently from the Church.[10] Due to its historic roots to the old University of Leuven, it is considered the oldest extant Catholic university. KU Leuven is open to students from different faiths or life-stances.[11][12] 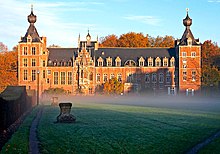 Kasteel van Arenberg, purchased by the Katholieke Universiteit Leuven's predecessor in 1921.
For the history of the pre-1970 university, see Catholic University of Leuven (1834–1968) § History.

In 1968, tensions between the Flemish-speaking and French-speaking communities led to the splitting of the bilingual Catholic University of Leuven into two "sister" universities, with the Flemish-language university becoming a fully functioning independent institution in Leuven in 1970, and the Université catholique de Louvain departing to a newly built greenfield campus site in the French-speaking part of Belgium. KU Leuven's first rector was Pieter De Somer. KU Leuven considers itself to be the continuation of the Studium Generale Lovaniense established in 1425.[16]

In 1972, the KUL set up a separate entity Leuven Research & Development (LRD) to support industrial and commercial applications of university research. It has led to numerous spin-offs, such as the technology company Metris, and manages tens of millions of euros in investments and venture capital.

The university's electronic learning environment, TOLEDO, which started in September 2001, was gradually developed into the central electronic learning environment at the KUL. The word is an acronym for TOetsen en LEren Doeltreffend Ondersteunen (English: "effectively supporting testing and learning"). It is the collective name for a number of commercial software programs and tools, such as Blackboard. The project offers the Question Mark Perception assignment software to all institution members and has implemented the Ariadne KPS to reuse digital learning objects inside the Blackboard environment.

On 11 July 2002, the KU Leuven became the dominant institution in the "KU Leuven Association" (see below).

KU Leuven is a member of the Coimbra Group (a network of leading European universities) as well as of the LERU Group (League of European Research Universities). Since November 2014, KU Leuven's Faculty of Economics and Business is accredited by European Quality Improvement System, which is a leading accreditation system specializing in higher education institutions of management and business administration.[17] As of academic year of 2012-2013, the university held Erasmus contracts with 434 European establishments. It also had 22 central bilateral agreements in 8 countries: the United States, China, South Africa, Japan, the Democratic Republic of Congo, Vietnam, Poland, and the Netherlands. The vast majority of international EU students came from the Netherlands, while most non-EU ones come from China.

KU Leuven is financially independent from the Catholic Church. Although a representative from the Church sits in its Board of Governors, their function is observational and has no voting power. Its management and academic decisions are similarly autonomous.[10]

In December 2011, the university changed its official name to KU Leuven in all official communications and branding.[18][19] While its legal name remains to be Katholieke Universiteit Leuven, the university uses KU Leuven in all communications, including academic research publications.[1] The long name is only used in contracts and only on the first instance, according to university's communication guidelines. According to its then rector, the change is intended as a way to emphasize its history of freedom of academic inquiry and its independence from the Church, without erasure of its Catholic heritage.[18]

Since August 2017, the university has been led by Luc Sels who replaced former rector Rik Torfs. The Belgian archbishop, André-Joseph Léonard is the current Grand Chancellor and a member of the university board.

Historically, the Catholic University of Leuven has been a major contributor to the development of Catholic theology. The university is dedicated to Mary, the mother of Jesus, under her traditional attribute as "Seat of Wisdom", and organizes an annual celebration on 2 February in her honour. On that day, the university also awards its honorary doctorates. The seal used by the university shows the medieval statue Our Lady of Leuven in a vesica piscis shape.

KU Leven's main campus is in Leuven where school faculties, libraries, institutes, residence halls, the university hospital UZ Leuven, and other facilities are interspersed throughout the city proper, as well as just outside its ring road in Heverlee borough.[21] Its intercultural meeting center Pangaea is located in the city center. The University Sports Centre is located in Heverlee, including Univ-Fit gym. In addition, the UNESCO World Heritage Site Groot Begijnhof, a historic beguinage in the south of city, is owned by the university and functions as one of its many residence halls.

Public transport within the city is primarily served by the De Lijn bus system. Leuven is a main hub in Belgium's and nearby country's train network. Leuven station is located in the northeast edge of the city.

Academics at KU Leuven is organized into three groups, each with its own faculties, departments, and schools offering programs up to doctoral level. While most courses are taught in Flemish, many are offered in English, particularly the graduate programs.[22] Notable divisions of the university include the Higher Institute of Philosophy and the Rega Institute for Medical Research.

The students of the university are gathered together in the student's council Studentenraad KU Leuven.[23] They have representatives in most meetings at the university, including the Board of Directors. It was separated from LOKO [nl] in 2012-2013 when the different locations outside of Leuven became part of the university. LOKO remained the overarching student organisation for all students in the city of Leuven. 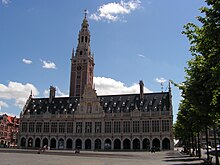 KU Leuven has 24 libraries and learning centers across its 12 campuses, containing millions of books and other media. Its theology library alone hold 1.3 million volumes, including works dating from the 15th century.[24] The following libraries are found at its Leuven campus:[25]

Universitair ziekenhuis Leuven (UZ Leuven) is the teaching hospital associated with the KU Leuven. Its most well known and largest campus is Gasthuisberg, which also houses the faculty of pharmaceutical sciences and most of the faculty of medicine.

Students attending a conference at the Katholieke Universiteit Leuven

KU Leuven is a member of a number of international university affiliations including the League of European Research Universities, Coimbra Group, UNA Europa, Universitas 21, and Venice International University, among others.

As of 2020, KU Leuven ranks 45th in the Times Higher Education rankings, 80th according QS World University Rankings, 85th according the Shanghai Academic Ranking of World Universities.[6][7][8] KU Leuven ranked first in Thomson Reuters' list of Europe's most innovative universities four times in a row since it began in 2016.[30] As of 2019, also ranks 52nd according to the CWTS Leiden Ranking and 56th according U.S. News & World Report Best Colleges Ranking. [5][31]

Notable recipients of honorary doctorates at the Katholieke Universiteit Leuven include:

Retrieved from "https://en.wikipedia.org/w/index.php?title=KU_Leuven&oldid=966007668"
Categories:
Hidden categories:
The article is a derivative under the Creative Commons Attribution-ShareAlike License. A link to the original article can be found here and attribution parties here. By using this site, you agree to the Terms of Use. Gpedia Ⓡ is a registered trademark of the Cyberajah Pty Ltd.