Kefir or kephir (/kəˈfɪər/ kə-FEER),[1][2] is a fermented milk drink similar to a thin yogurt that is made from kefir grains, a specific type of mesophilic symbiotic culture. The drink originated in the North Caucasus, Eastern Europe and Russia,[3] where it is prepared by inoculating cow, goat, or sheep milk with kefir grains.[4]

The word kefir, known in Russian since at least 1884,[5] is probably of Georgian[6][7] and North Caucasian origin,[3][8] although some sources see a connection to Turkic köpür (foam)[8] or kaf (a Kurdish kef or Persian کف word meaning foam or bubbles).[9] Traditional kefir was made in goatskin bags that were hung near a doorway; the bags would be knocked by anyone passing through to keep the milk and kefir grains well mixed.[10] Kefir spread from the former Soviet Union to the rest of Europe, Japan, the United States by the early 21st century.[3][11][12] It has become known in Latin America as búlgaros, or "Bulgarian drink". 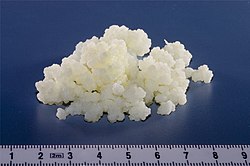 Kefir grains, a symbiotic matrix of bacteria and yeasts

Traditional kefir is fermented at ambient temperatures, generally overnight. Fermentation of the lactose yields a sour, carbonated, slightly alcoholic beverage, with a consistency and taste similar to drinkable yogurt.[13]

The kefir grains initiating the fermentation are initially created by auto-aggregations of Lactobacillus kefiranofaciens and Saccharomyces turicensis, which then gets the surface adhered by multiple biofilm producers to become a three dimensional microcolony.[14][15] The biofilm is a matrix of heteropolysaccharides called kefiran, which is composed of equal proportions of glucose and galactose.[3] It resembles small cauliflower grains, with color ranging from white to creamy yellow. A complex and highly variable symbiotic community can be found in these grains, which can include acetic acid bacteria (such as A. aceti and A. rasens), yeasts (such as Candida kefyr and S. cerevisiae) and a number of Lactobacillus species, such as L. parakefiri, L. kefiranofaciens (and subsp. kefirgranum[16]), L. kefiri[17], etc.[3] While some microbes predominate, Lactobacillus species are always present.[18] The microbe flora can vary between batches of kefir due to factors such as the kefir grains rising out of the milk while fermenting or curds forming around the grains, as well as temperature.[19] Additionally, Tibetan kefir composition differs from that of the Russian kefir, Irish kefir, Taiwan kefir and Turkey fermented beverage with kefir.[3] In recent years, the use of freeze-dried starter culture has become common due to stability of the fermentation result, because the species of microbes are selected in laboratory conditions, as well as easy transportation.[20][21][22]

During fermentation, changes in the composition of ingredients occur. Lactose, the sugar present in milk, is broken down mostly to lactic acid (25%) by the lactic acid bacteria, which results in acidification of the product.[18] Propionibacteria further break down some of the lactic acid into propionic acid (these bacteria also carry out the same fermentation in Swiss cheese). Other substances that contribute to the flavor of kefir are pyruvic acid, acetic acid, diacetyl and acetoin (both of which contribute a "buttery" flavor), citric acid, acetaldehyde, and amino acids resulting from protein breakdown.[23]

The slow-acting yeasts, late in the fermentation process, break lactose down into ethanol and carbon dioxide.[citation needed] As a result of the fermentation, very little lactose remains in kefir.[citation needed] People with lactose intolerance are able to tolerate kefir, provided the number of live bacteria present in this beverage consumed is high enough (i.e., fermentation has proceeded for adequate time). It has also been shown that fermented milk products have a slower transit time than milk, which may further improve lactose digestion.[24]

Kefir contains ethanol,[25] which is detectable in the blood of human consumers.[26][dubious – discuss] The level of ethanol in kefir can vary by production method. A 2016 study of kefir sold in Germany showed an ethanol level of only 0.02 g per litre, which was attributed to fermentation under controlled conditions allowing the growth of Lactobacteria only, but excluding the growth of other microorganisms that form much higher amounts of ethanol.[27] A 2008 study of German commercial kefir found levels of 0.002-0.005% of ethanol.[28] Another study found levels of ethanol of 2.10%, 1.46% and 1.40% in cow, goat and sheep kefir, respectively.[29] Kefir produced by small-scale dairies in Russia early in the 20th century had 1-2% ethanol.[28] Modern processes, which use shorter fermentation times, result in much lower ethanol concentrations of 0.2–0.3%.[citation needed]

Kefir products contain nutrients in varying amounts from negligible to significant, including dietary minerals, vitamins, essential amino acids, and conjugated linoleic acid,[30] in amounts similar to unfermented cow, goat, or sheep milk.[31] At a pH of 4.2 - 4.6,[32] kefir is composed mainly of water and by-products of the fermentation process, including carbon dioxide and ethanol.[33]

Typical of milk, several dietary minerals are found in kefir, such as calcium, iron, phosphorus, magnesium, potassium, sodium, copper, molybdenum, manganese, and zinc in amounts that have not been standardized to a reputable nutrient database.[33] Also similar to milk,[31] kefir contains vitamins in variable amounts, including vitamin A, vitamin B1 (thiamine), vitamin B2 (riboflavin), vitamin B3 (niacin), vitamin B6 (pyridoxine), vitamin B9 (folic acid), vitamin B12 (cyanocobalamin), vitamin C, vitamin D, and vitamin E.[33] Essential amino acids found in kefir include methionine, cysteine, tryptophan, phenylalanine, tyrosine, leucine, isoleucine, threonine, lysine, and valine,[33] as for any milk product.[31]

In addition to bacteria, kefir often contains strains of yeast that can metabolize lactose, such as Kluyveromyces marxianus, Kluyveromyces lactis, and Saccharomyces fragilis, as well as strains of yeast that do not metabolize lactose, including Saccharomyces cerevisiae, Torulaspora delbrueckii, and Kazachstania unispora.[18] The nutritional significance of these strains is unknown. 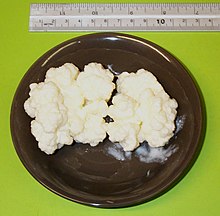 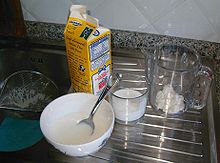 Kefir is made by adding kefir grains to milk typically at a proportion of 2-5% grains-to-milk. The mixture is then placed in a corrosion-resistant container, such as a glass jar, and stored preferably in the dark to prevent degradation of light-sensitive vitamins. After a period between 12-24 hours of fermentation at mild temperature, ideally 20–25 °C (68–77 °F),[23] the grains are strained from the milk using a corrosion-resistant (stainless steel or plastic) utensil and kept to produce another batch. During the fermentation process the grains enlarge and eventually split forming new units.

The resulting fermented liquid may be drunk, used in recipes, or kept aside in a sealed container for additional time to undergo a secondary fermentation. Because of its acidity the beverage should not be stored in reactive metal containers such as aluminium, copper, or zinc, as these may leach into it over time. The shelf life, unrefrigerated, is up to thirty days.[35]

The Russian method permits production of kefir on a larger scale and uses two fermentations. The first step is to prepare the cultures by inoculating milk with 2–3% grains as described. The grains are then removed by filtration and 1–3% of the resulting liquid mother culture is added to milk and fermented for 12 to 18 hours.[36]

Kefir can be made using freeze-dried cultures commonly available in powder form from health food stores. A portion of the resulting kefir can be saved to be used a number of times to propagate further fermentations but ultimately does not form grains.

In Taiwan, researchers were able to produce kefir in laboratory using microorganisms isolated from kefir grains. They report that the resulting kefir drink had chemical properties similar to homemade kefir.[37]

Kefir grains will ferment the milk from most mammals and will continue to grow in such milk. Typical animal milks used include cow, goat, and sheep, each with varying organoleptic (flavor, aroma, and texture) and nutritional qualities. Raw milk has been traditionally used.

Kefir grains will also ferment milk substitutes such as soy milk, rice milk, nut milk and coconut milk, as well as other sugary liquids including fruit juice, coconut water, beer wort, and ginger beer. However, the kefir grains may cease growing if the medium used does not contain all the growth factors required by the bacteria.

Milk sugar is not essential for the synthesis of the polysaccharide that makes up the grains (kefiran), and rice hydrolysate is a suitable alternative medium.[38] Additionally, kefir grains will reproduce when fermenting soy milk, although they will change in appearance and size due to the differing proteins available to them.[39]

A variation of kefir grains that thrive in sugary water also exists, see water kefir (or tibicos), and can vary markedly from milk kefir in both appearance and microbial composition. 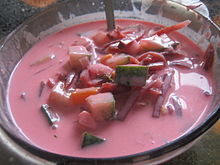 As it contains Lactobacillus bacteria, kefir can be used to make a sourdough bread. It is also useful as a buttermilk substitute in baking. Kefir is one of the main ingredients in borscht in Lithuania, also known in Poland as Lithuanian cold soup (chłodnik litewski), and other countries. Kefir-based soup okroshka is common across the former Soviet Union. Kefir may be used in place of milk on cereal, granola, milkshakes, salad dressing, ice cream, smoothies and soup.

Retrieved from "https://en.wikipedia.org/w/index.php?title=Kefir&oldid=975656541"
Categories:
Hidden categories:
The article is a derivative under the Creative Commons Attribution-ShareAlike License. A link to the original article can be found here and attribution parties here. By using this site, you agree to the Terms of Use. Gpedia Ⓡ is a registered trademark of the Cyberajah Pty Ltd.