The Kivalliq Region (in red)

The Kivalliq Region (/kɪˈvælɪk/; Inuktitut syllabics: ᑭᕙᓪᓕᖅ[pronunciation?]) is an administrative region of Nunavut, Canada. It consists of the portion of the mainland to the west of Hudson Bay together with Southampton Island and Coats Island. The regional seat is Rankin Inlet. The population was 10,413 in the 2016 Census, an increase of 16.3% from the 2011 Census.[1]

Before 1999, Kivalliq Region existed under slightly different boundaries as Keewatin Region, Northwest Territories. Although the Kivalliq name became official in 1999, Statistics Canada has continued to refer to the area as Keewatin Region, Nunavut in publications such as the Census.[1] Most references to the area as "Keewatin" have generally been phased out by Nunavut-based bodies, as that name was originally rooted in a region of northwestern Ontario derived from a Cree dialect, and only saw application onto Inuit-inhabited lands because of the boundaries of the now-defunct District of Keewatin. 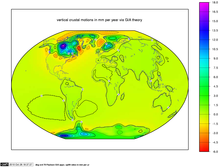 The Kivalliq Region is experiencing the world's highest rate of post-glacial rebound (as much as 17 mm (0.67 in) per year).

The remainder of the region is referred to as Keewatin, Unorganized by Statistics Canada.

Retrieved from "https://en.wikipedia.org/w/index.php?title=Kivalliq_Region&oldid=964390838"
Categories:
Hidden categories:
The article is a derivative under the Creative Commons Attribution-ShareAlike License. A link to the original article can be found here and attribution parties here. By using this site, you agree to the Terms of Use. Gpedia Ⓡ is a registered trademark of the Cyberajah Pty Ltd.