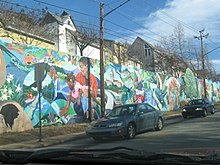 The Watershed Mural on Dekalb Avenue

Lake Claire is a neighborhood on the east side of Atlanta, Georgia, United States, comprising approximately 1,200 homes. It is situated entirely in the DeKalb County side of the city, east of Candler Park, north of Kirkwood, west of Decatur, and south of Druid Hills.

There was never an actual body of water known as Lake Claire; rather, it was a shorthand for the intersection of Lakeshore and Claire Drives. The closest thing to a commercial district is the small strip bordering Candler Park at McLendon and Clifton.

Part of the neighborhood lies with the Candler Park Historic District, which has been listed on the National Register of Historic Places.

Residents in Lake Claire are within Atlanta Public Schools.

Retrieved from "https://en.wikipedia.org/w/index.php?title=Lake_Claire,_Atlanta&oldid=942006770"
Categories:
Hidden categories:
The article is a derivative under the Creative Commons Attribution-ShareAlike License. A link to the original article can be found here and attribution parties here. By using this site, you agree to the Terms of Use. Gpedia Ⓡ is a registered trademark of the Cyberajah Pty Ltd.