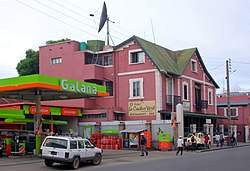 Signs in French in Antananarivo.

The Malagasy language of Malayo-Polynesian origin, is generally spoken throughout the island. The official languages of Madagascar are Malagasy and French. Madagascar is a Francophone country, and French is spoken among the educated population of this former French colony. Including second-language speakers, there are more speakers of Malagasy than French in Madagascar [1].

In the first Constitution of 1958, Malagasy and French were named the official languages of the Malagasy Republic.[1]

No official languages were mentioned in the Constitution of 1992. Instead, Malagasy was named the national language; however, many sources still claimed that Malagasy and French were official languages, as they were de facto. In April 2000, a citizen brought a legal case on the grounds that the publication of official documents in the French language only was unconstitutional. The High Constitutional Court observed in its decision[2] that, in the absence of a language law, French still had the character of an official language.

In the Constitution of 2007, Malagasy remained the national language while official languages were reintroduced: Malagasy, French, and English. The motivation for the inclusion of English was partly to improve relations with the neighboring countries where English is used and to encourage foreign direct investment.[3] English was removed as an official language from the constitution approved by voters in the November 2010 referendum. These results are not recognized by the political opposition or the international community, who cite lack of transparency and inclusiveness in the organization of the election by the High Transitional Authority.[4]

Retrieved from "https://en.wikipedia.org/w/index.php?title=Languages_of_Madagascar&oldid=934003885"
Categories:
Hidden categories:
The article is a derivative under the Creative Commons Attribution-ShareAlike License. A link to the original article can be found here and attribution parties here. By using this site, you agree to the Terms of Use. Gpedia Ⓡ is a registered trademark of the Cyberajah Pty Ltd.