Lenox Square (also known as Lenox Mall) is a shopping mall located in the Buckhead district of Atlanta, Georgia. Lenox Square comprises 1,558,678 square feet (144,805.9 m2) of retail space, with 198 stores on four levels, including a large food court. The mall is home to three anchor stores: Macy's, Bloomingdale's, and Neiman Marcus. The mall is owned by Simon Property Group and has been owned by the Indianapolis-based developer since 1998, along with the neighboring Phipps Plaza shopping center.

Lenox Square opened to the public on August 3, 1959. Originally, it operated as an open-air shopping center, much like a typical lifestyle center. The mall's original anchors were Rich's and Davison's, two of the most famous and acclaimed department stores in the area, as well as grocery chain Colonial Stores. The mall originally opened with 60 stores. Over the next few decades, the mall underwent four expansions, since competition would arise from the opening of many shopping malls in the suburbs. The most recent renovation included the expansion of the Neiman Marcus store by 52,000 square feet (4,800 m2) and the addition of 36,000 square feet (3,300 m2) of new retail space. Lenox Square houses several upscale stores that do not have other locations within several hundred miles of Atlanta. These include Ermenegildo Zegna, David Yurman, Diesel, Fendi, Louis Vuitton, Cartier, Salvatore Ferragamo, Burberry, G-Star Raw, UGG, Topshop, DVF, Ted Baker, Escada, Tesla Motors, CH Carolina Herrera, Kiehl's, Zara, and Prada. Lenox Square also has the largest Pottery Barn in their chain as well as one of the largest Forever 21 stores in the Southeastern United States.

Lenox Square was developed by Ed Noble, a former developer from Kansas City, Missouri, whose company J. Noble Properties, acquired the site in 1956.[1] Groundbreaking for the shopping center occurred in July 1957, and it was completed on June 29, 1958.[2] The public opening ceremony for Lenox Square was held on August 3, 1959.

Initially containing 800,000 square feet (74,000 m2) of retail, the shopping mall was situated on three levels; Mall. Plaza and Market. It was anchored by Rich's, Davison's, and a Colonial Stores supermarket. There were 52 original tenants, including a bowling alley, indoor golf driving range, and a Kresge five and dime store. The Mall Level concourse featured several statues depicting Uncle Remus characters, such as Br'er Fox, Br'er Frog and the Tar Baby. A movie theater opened on the Market Level in June 1963.[3][better source needed]

Within its first few years of its existence, Lenox Square would be a part of several major events in the city. It is the starting point in the annual Peachtree Road Race, one of the largest 10 kilometer races in the world.[4][5] Davison's, owned by Macy's since 1924, was rebranded as Macy's in 1986.[6] In 2000, the celebration of the Rich's Great Tree moved to the flagship store from Underground Atlanta, after having been held downtown for decades.[7]

In 1991, Rich's relocated their flagship store to Lenox Square from downtown Atlanta. In 2003, Federated Department Stores began integrating the Macy's name with their other regional department store brands, including Rich's. Following the news, the Lenox Macy's location closed and the building (along with the location at Perimeter Mall) was renovated extensively to house the first Bloomingdale's in the South, which opened in October 2003. In 2005, Federated Department Stores dropped the regional names of all of their department stores. The former Rich's-Macy's location at Lenox Square became the flagship of Macy's Central until all of the company's divisions had consolidated into one.[8][9] 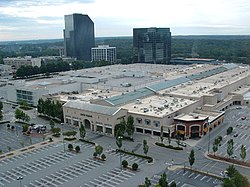 An aerial view of Lenox Square before its major renovation.

Since its opening, Lenox Square has undergone four major renovations and expansions. During the years following the opening of the shopping mall, several new retail centers opened up in several suburban locations, notably Perimeter Mall and Cumberland Mall. As a response to increasing competition, Lenox Square underwent a major renovation and expansion in the early 1970s that would have the entire shopping center enclosed. The renovation included a new wing and the addition of the first Neiman Marcus location outside of Texas and Florida.[10] It is still to this day the company's only location in the state.[11]

Lenox Square has several upscale stores not found within hundreds of miles from Atlanta such as Louis Vuitton, Burberry, Cartier and David Yurman

A second expansion was completed in 1980 that added a three-level section at the back of the mall which included a food court. This replaced the previous open-air Plaza Court and supermarket. Lenox Square now encompassed 1.04 million leasable square feet. The new food court was soon joined by a 19-story, 370,000 sqft (gross), class-A office building, a twin-appearing 24-story hotel, 1,800 space, five-level combined hotel-office parking garage (two below ground), and 800-space four-level retail pre-cast concrete parking deck. These were adjacent to the MARTA's Lenox transit station, which opened in December 1984.

In 1995, the mall underwent its largest expansion, adding a second story above the original Mall Level. The expansion made Lenox Square the largest shopping center in Georgia, with 1.457 million square feet (140,000 m²) divided among 200 stores and restaurants.[12] This distinction was relinquished to the newly built, 1.7-million-square-foot (160,000 m2) Mall of Georgia in 1999.

The most recent expansion of Lenox Square was completed in 2007. The existing Neiman Marcus was enlarged by 52,000 square feet (4,800 m2) and a 36,000-square-foot (3,300 m2) upper level was added to the wing connecting the store to the main mallway. The shopping center then housed 1.545 million leasable square feet and 240 stores and services.[13] In Fall 2013 another renovation took place in the mall with additions of both exterior and interior with new lightning, landscaping, windowing, and many more. The renovations were completed as of 2014.

Lenox Square is connected via parkway to the 27-story JW Marriott Buckhead hotel, classified as a 4-Diamond hotel by the AAA. Many other luxury hotels are within walking distance from Lenox. These include W Hotel, The Whitley, Grand Hyatt, InterContinental, Waldorf Astoria, and Westin.

The area around Lenox has grown immensely in the past few decades following its opening, with expanding retail developments and over 75 restaurants within a mile radius, which has made the area a highly desirable location to live and work.[14] A two-story Target store sits across from Lenox at Lenox Marketplace, connected inside via escalators and elevators designed for shopping carts as well as shoppers, and having checkouts on both levels at the exits to a parking deck. Other stores at Lenox Marketplace include Dick's Sporting Goods and Publix. The Sembler Company was the developer. In addition, Phipps Plaza is located to the northeast of Lenox Square across Peachtree Road. Traffic levels around Lenox are high and the streets are confusing for those unfamiliar with the area. Georgia 400 opened in 1993, restricting traffic to and from the west after it cut many existing roads. However, the BUC (Buckhead Uptown Connection), the free shuttle bus service around Buckhead, is available, supported voluntarily by a self-taxing district (Buckhead CID) which includes Lenox, and by GRTA and other agencies. The Peachtree Streetcar initiative would also extend free or low-fare streetcars to Lenox in the north, through midtown and downtown, to a proposed mixed-use redevelopment around historic Fort McPherson, 14 miles (23 km) south. MARTA, the city's main mass transit system, provides one station across the street from the J W Marriott, as well as the Buckhead station a quarter mile Northwest on Peachtree Road.

Several companies, such as AT&T Mobility,[15] have their headquarters near the shopping center.

The area surrounding Lenox Square contains a 125,000 square foot retail center, The Shops Around Lenox. This open air mall, anchored by a Crate & Barrel includes 16 retail stores, smaller specialty stores, restaurants, and workout studios. The center was first built in 1979, underwent a major redevelopment during the recession and was sold by the developers in 2014 for $71.8 million.[16] A full list is detailed below.[17] 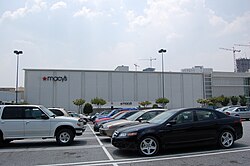 The Macy's store at Lenox Square. The Macy's location at Lenox is one of the company's flagship stores.[18]

Visited by more than 35 million people a year, Lenox Square is one of the most popular and profitable retail centers in the United States.[19] Together with Phipps Plaza, an estimated $1 billion was pumped into the local economy in 2007.[20] Lenox Square attracts a significant amount of foreign shoppers and tourists; an estimated 40% of all visitors to the shopping center in 2009 were tourists.[1] Lenox Square is the third largest shopping mall in the state, as well as one of the largest in the Southeast. Only the Mall of Georgia and Perimeter Mall have a larger gross leasable area than Lenox Square.[21]

In December 2019, a Macy's employee was robbed and shot after she went to her vehicle to retrieve an item.[22]

On January 15, 2020, two men were holding a third man at gunpoint in the mall parking deck after it was revealed the victim had previously stolen items from the two suspects at some point during their visit to the mall. One of the two men refused to lower his firearm once the police arrived, and was shot by police. The shot was mistaken by shoppers inside of the mall, creating panic with many people running throughout the mall.[23]

On February 10, 2020, a man was shot in the Bloomingdale's parking lot after a prearranged meeting with a friend.[24]

On March 8, 2020, a person was shot and killed after a confrontation with another vehicle in the parking lot of the mall.[25]

Retrieved from "https://en.wikipedia.org/w/index.php?title=Lenox_Square&oldid=944645832"
Categories:
Hidden categories:
The article is a derivative under the Creative Commons Attribution-ShareAlike License. A link to the original article can be found here and attribution parties here. By using this site, you agree to the Terms of Use. Gpedia Ⓡ is a registered trademark of the Cyberajah Pty Ltd.