List of Native Americans in the United States Congress

This is a list of Native Americans with documented tribal ancestry or affiliation in the U.S. Congress.

Map of all congressional districts represented by Native Americans in the 117th Congress. 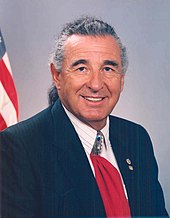 Ben Nighthorse Campbell (R-Colorado), a Northern Cheyenne and one of only 4 Native Senators in U.S. history. As of 2020, he is the last Native American to have served in the Senate.

All entries on this list are related to Native American tribes based in the contiguous United States. No Alaska Natives have ever served in Congress. There are Native Hawaiians who have served in Congress, but they are not listed here because they are distinct from North American Natives.

Only two Native Americans served in the 115th Congress: Tom Cole (serving since 2003) and Markwayne Mullin (serving since 2013), both of whom are Republican Representatives from Oklahoma. On November 6, 2018, Democrats Sharice Davids of Kansas and Deb Haaland of New Mexico were elected to the U.S. House of Representatives, and the 116th Congress, which commenced on January 3, 2019, has four Native Americans. Davids and Haaland are the first two Native American women with documented tribal ancestry to serve in Congress. There currently are five Native Americans seated in the House, the largest delegation yet in history: Cole, Mullin, Haaland and Davids were all reelected in 2020, with Republican Yvette Herrell of New Mexico elected for the first time in 2020.

Retrieved from "https://en.wikipedia.org/w/index.php?title=List_of_Native_Americans_in_the_United_States_Congress&oldid=998721731"
Categories:
Hidden categories:
The article is a derivative under the Creative Commons Attribution-ShareAlike License. A link to the original article can be found here and attribution parties here. By using this site, you agree to the Terms of Use. Gpedia Ⓡ is a registered trademark of the Cyberajah Pty Ltd.