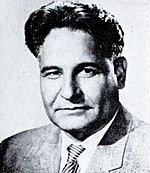 Born in Chhajulwadi, Amritsar district, Punjab Province, British India (now Chhajjalwaddi, Punjab, India), to an Indian Punjabi Sikh family, he received his bachelor's degree in mathematics from the University of Punjab in 1919.

He immigrated to the United States (via Ellis Island) originally to study agriculture at the University of California, Berkeley. While at the university, he obtained a master's degree (1922) and a PhD (1924), both in mathematics. His studies were sponsored by Stockton Gurdwara in Stockton, California as he lived in the gurdwara-owned Guru Nanak Khalsa Hostel. Stockton Gurdwara was "the first permanent Sikh American settlement and gurdwara in the United States."[1] He thereafter remained in the United States, becoming a successful farmer. He married Marian Kosa in 1928. They had three children.[2]

In 1930, Saund was commissioned by Stockton Gurdwara to write a book called “My Mother India" which pleaded for an end to the British Empire's occupation of the Indian subcontinent. Saund wrote that his book was intended to “answer various questions that commonly arise in the minds of the American people regarding the cultural and political problems of India.” His book addressed India's caste system as one of those questions and "pleaded for the civil rights of the downtrodden in India as he compared caste in India to racism in America and elsewhere." [3]

Later, he campaigned to allow people of South Asian descent to become naturalized citizens. After the Luce-Celler Act was passed in 1946, he applied for naturalization and became an American citizen in 1949. He ran for election in 1950 as a Justice of the Peace for Westmoreland township, California, and won the election, but his election was thrown out as he had been a citizen for less than a year. He later ran again for the same post and won.[4]

In November 1955, he announced his campaign to run for the House of Representatives as a Democrat and won an election for an open seat against a famous Republican aviator, Jacqueline Cochran. He was re-elected twice, becoming the first Sikh American, the first Asian American, the first Indian American and first member of a non-Abrahamic faith to be elected to Congress.

Dalip Singh Saund in the Oval Office on February 14, 1961

On May 1, 1962, Saund suffered a severe stroke on an airplane flight which left him unable to speak or walk without assistance. Though unable to campaign, he won the June Democratic primary (running in the newly numbered 38th district) but was defeated for reelection in the November general election by Republican Patrick M. Martin by a 56% to 44% margin.[5]

Following his defeat, his condition slightly improved allowing him to be moved from a hospital in Bethesda, Maryland to California. He had a second stroke about 10 years later and died on April 22, 1973 at his Hollywood home.[5]

Retrieved from "https://en.wikipedia.org/w/index.php?title=Dalip_Singh_Saund&oldid=1002295994"
Categories:
Hidden categories:
The article is a derivative under the Creative Commons Attribution-ShareAlike License. A link to the original article can be found here and attribution parties here. By using this site, you agree to the Terms of Use. Gpedia Ⓡ is a registered trademark of the Cyberajah Pty Ltd.