Jump to navigation Jump to search
This article is about the paygrades of enlisted sailors. For the occupational specialties known as "rates", see List of United States Navy rates. 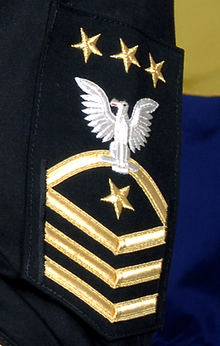 The rating badge of the Master Chief Petty Officer of the U.S. Navy, worn on a service dress blue uniform's sleeve.

Ratings are earned through "A" schools, which are attended before deployment and after undergoing initial basic training at Recruit Training Command, Great Lakes, Illinois, or (less commonly) by "striking" for a rating through on-the-job training (OJT) in the Fleet. Some sailors may undergo additional training in a "C" school either before or after a tour of duty. Upon completion, they are assigned a four-digit Navy Enlisted Classification (NEC) code, which identifies a specific skill within their standard rating. This defines what jobs they are qualified to do. For example, some billets might not only require a hospital corpsman first class, but might specify that he/she has NEC 8402 (Submarine Force Independent Duty), NEC 8403 (Fleet Marine Forces Reconnaissance Independent Duty Corpsman), or any other of several NECs depending upon the billet's requirements.[3]

On September 29, 2016, the United States Navy discontinued enlisted ratings after 241 years of use in an effort to modernize the classification system. Naval sailors were thereafter to be referred to solely by their rate and would hold a Navy Operations Specialty (NOS) instead of a rating. The rating symbols depicted for each rating badge listed below (except for the rating badge of a command master chief) is boatswain's mate.[2] However, the decision was reversed and the rating system was restored in December 2016.[4]

Sailors in pay grades E-1 through E-3 are considered to be in apprenticeships.[5] They are divided into five definable groups, with colored group rate marks designating the group to which they belong: Seaman, fireman, airman, constructionman, and hospitalman. One of three apprentice devices may be worn above the rank insignia, which denotes the sailor is an apprentice in a particular field and is in search of a rating to join.[6] Sailors who have gone directly to a base, station, or ship without any specialized training are eligible to select a career field, and through correspondence courses and extensive on-the-job training, may qualify for a rating. This process is called "striking for a rating". If a sailor has qualified for a rate, but has not yet become a petty officer, he is called a designated striker, and is identified by a striker's badge that displays the sailor's rating, along with his group rate marks.[1] The serviceman is addressed by one's group designation, if known (e.g., Fireman Jones, Constructionman Apprentice Smith); by the generic appellation "seaman"; or by one's striker designation (Boatswain's Mate Seaman Watson, Culinary Specialist Seaman Recruit Johnson).[5] Those that have completed the "A" school for hospital corpsman wear their caduceus above their stripes and substitute the word "Hospitalman" for "Seaman" in their rating titles.

In the September 2016 rating change, it was announced that only the "seaman" group would remain as the rate title for E1–E3, with the others being retired.[7] However, the Navy reversed this new policy three months later and reinstated the traditional rating system.[8]

E-4 to E-6 are non-commissioned officers (NCOs), and are specifically called petty officers in the Navy.[6] Petty officers perform not only the duties of their specific career field but also serve as leaders to junior enlisted personnel. They must take responsibility for their subordinates, address grievances, inform the chain of command on matters pertaining to good order and discipline, and may even have to place personnel on report.[9] The title petty officer comes from the French word petit, meaning something small. In medieval England, villages had several "petite" or "petty" officers who were subordinate to major officials. Thus, petty officers are assistants to senior officers.[10]

Petty officers have been an important part of the U.S. Navy since its beginning. They were originally appointed by the ship's captain and usually held such appointments while serving under the captain who selected them. The petty officers of this time did not have uniforms or a rank insignia.[10] In 1841 a rate badge was assigned, consisting of a sleeve device displaying an eagle perched on an anchor. Rating marks did not appear until 1866.[10]

From 1885 to 1894, the Navy recognized three classes of petty officers who were authorized to wear a "rate" (rank) insignia consisting of chevrons pointing down under a spread eagle and a rating mark.[10] Unlike the current rate badge, the eagle faced right instead of left.[6] The current insignia for petty officers came about in 1894, and is a perched eagle with spread wings (usually referred to as a "crow," due to its black color on white uniforms and the former light blue working uniforms) above a rating mark, with chevrons denoting their rank below.[6] Initially, the eagle faced left or right on the rating emblem depending on which sleeve the badge was worn. "Seafarer" rates, such as boatswain or gunner, are unique to service aboard a ship, and were worn on the right sleeve; the eagle on these insignia faced right, so that they would be facing forward on the wearer. Other rates, such as administration or medical positions, were worn on the left sleeve, so the eagle on those insignia faced left, so that they would be facing forward on the wearer. In 1948, the Navy standardized all ratings to be worn on the left sleeve.

The authority to wear gold rating badges and service stripes on the dress blue and working coverall uniform is granted when a sailor completes twelve consecutive years of service. Prior to June 2019, those years had to have been without any official record of bad conduct due to punitive action via non-judicial punishment or courts martial. During that time, the gold rating badges and service stripes were treated distinctly from the Good Conduct Medal, which was and is awarded for three consecutive years of "honorable service", defined as being free of disciplinary infractions.[11]

E-7 to E-9 are senior non-commissioned officers and are considered a separate community within the Navy. They have separate berthing and dining facilities (where feasible), wear separate uniforms, and perform separate duties. Advancement to chief petty officer (E-7) or above requires a board review by existing master chief petty officers beyond the normal examination score and performance evaluation process. The annual list of chief petty officer selectees is authorized by Congress.[12]

The proper form of address to a chief petty officer is "Chief", "Senior chief" (or "Senior"), or "Master chief" according to their rating.[13] In the U.S. Navy, chief petty officers are specifically tasked, in writing, with the duty of training junior officers (ensign, lieutenant (j.g.), and lieutenant).[14]

Although the title "chief" has been around since the Continental Navy in 1776, the chief petty officer rate was not established until 1 April 1893. At that time nearly all sailors who had carried the rate of petty officer first class since 1885 were advanced to chief petty officer, with the exception of schoolmasters, ship's writers, and carpenter's mates.[12]

The dress blue insignia consists of a perched eagle (or "crow") with spread wings atop a rating mark, with three chevrons and one 'rocker' above the rating mark. Inverted five-point stars above the crow denote the rank of senior chief (one star) or master chief (two stars). All other uniforms use the collar device to denote rank. It consists of a fouled anchor (an anchor that is entangled with its chain)[15] with the initials U S N in silver, superimposed, with stars above the anchor to indicate higher pay grades, similar to the dress blue insignia.[16]

After attaining the rate of master chief petty officer, a sailor may choose to further his or her career by becoming a command master chief petty officer (CMDCM). A CMDCM is considered to be the senior-most enlisted service member within a command, and is the special assistant to the commanding officer in all matters pertaining to the health, welfare, job satisfaction, morale, utilization, advancement and training of the command's enlisted personnel.[17][18] CMCs can be Command level (within a single unit, such as a ship or shore station), Fleet level (squadrons consisting of multiple operational units, headed by a flag officer or commodore), or Force level (consisting of a separate community within the Navy, such as Subsurface, Air, Reserves).[19]

The CMDCM rate insignia are similar to the insignia for master chief, except that the rating symbol is replaced by an inverted five-point star, reflecting a change in their rating from their previous rating (e.g. MMCM) to CMDCM. The stars for command master chief are silver, while stars for fleet or force master chief are gold. Additionally, CMDCMs wear a badge, worn on their left breast pocket (for males) or above the nametag (for females), denoting their title (Command/Fleet/Force).[16][18]

The Master Chief Petty Officer of the Navy (MCPON) is the senior enlisted person in the Navy, appointed by the Chief of Naval Operations (CNO) to serve as a spokesperson to address the issues of enlisted personnel to the highest positions in the Navy. The MCPON is the senior enlisted advisor to the Chief of Naval Operations and Chief of Naval Personnel.[24] Exact duties vary, depending on the CNO, though the duties generally include traveling throughout the Navy, observing training and talking to sailors and their families. The MCPON serves on several boards concerned with enlisted members, represents the Department of the Navy at special events, and may be called upon to testify before Congress regarding enlisted personnel issues.[25]

The position was originally established as "Senior Enlisted Advisor of the Navy" in January 1967[25] in response to a recommendation from the Secretary of the Navy's task force on Navy personnel retention.[24] Three months later, the title was officially changed to "Master Chief Petty Officer of the Navy". The individual rating specialty marks for the MCPON was replaced by an inverted star in 1971.[26]

The MCPON's current insignia is similar to that of Fleet, Force, or CMDCMs, with the addition of a third star above the crow or anchor.[16]

Retrieved from "https://en.wikipedia.org/w/index.php?title=List_of_United_States_Navy_enlisted_rates&oldid=973300862"
Categories:
Hidden categories:
The article is a derivative under the Creative Commons Attribution-ShareAlike License. A link to the original article can be found here and attribution parties here. By using this site, you agree to the Terms of Use. Gpedia Ⓡ is a registered trademark of the Cyberajah Pty Ltd.