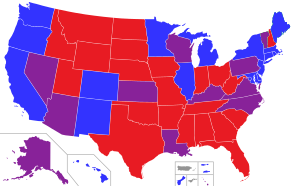 This is a list of United States state legislatures. Each state in the United States has a legislature as part of its form of civil government. Most of the fundamental details of the legislature are specified in the state constitution. With the exception of Nebraska, all state legislatures are bicameral bodies, composed of a lower house (Assembly, General Assembly, State Assembly, House of Delegates, or House of Representatives) and an upper house (Senate). The United States also has one federal district and five non-state territories with local legislative branches, which are also listed below. Among the states, the Nebraska Legislature is the only state with a unicameral body. However, three other territories – the District of Columbia, Guam, and the U.S. Virgin Islands – also have unicameral bodies.

Note: A party with a numerical majority in a chamber may be forced to share power with other parties due to informal coalitions or may cede power outright because of divisions within its caucus. 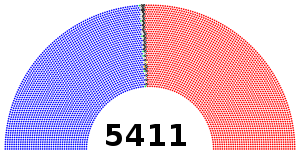 Diagram of all seats in state lower houses.

Retrieved from "https://en.wikipedia.org/w/index.php?title=List_of_United_States_state_legislatures&oldid=964682814"
Categories:
Hidden categories:
The article is a derivative under the Creative Commons Attribution-ShareAlike License. A link to the original article can be found here and attribution parties here. By using this site, you agree to the Terms of Use. Gpedia Ⓡ is a registered trademark of the Cyberajah Pty Ltd.