Jump to navigation Jump to search
For a list of wars before the creation of the United States, see List of conflicts in British America. 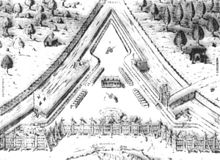 This is a list of conflicts in the United States. Conflicts are arranged chronologically from the late modern period to contemporary history. This list includes (but is not limited to) the following: Indian wars, skirmishes, wars of independence, liberation wars, colonial wars, undeclared wars, proxy wars, territorial disputes, and world wars. Also listed might be any battle that was itself only part of an operation of a campaign of a theater of a war. There may also be periods of violent civil unrest listed, such as: riots, shootouts, spree killings, massacres, terrorist attacks, and civil wars. The list might also contain episodes of: human sacrifice, mass suicide, genocides, and other related items that have occurred within the geographical area (including overseas territories) of what is today known as, the "United States of America". 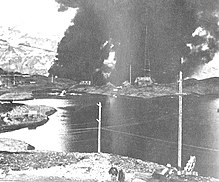 The Navy radio station at Dutch Harbor burning after the Japanese Attack, 4 June 1942 According to Japanese intelligence, the nearest field for land-based American aircraft was at Fort Morrow AAF on Kodiak, more than 600 miles (970 km) away, and Dutch Harbor was a sitting duck for the strong Japanese fleet, carrying out a coordinated operation with a fleet that was to capture Midway Island. The Dutch Harbor attack was part of the Aleutian Islands Campaign.

This includes all domestic conflicts and terrorist attacks that took place within the United States. Note that actions of terrorism and domestic conflict are distinguished from one another.

Retrieved from "https://en.wikipedia.org/w/index.php?title=List_of_conflicts_in_the_United_States&oldid=933944687"
Categories:
Hidden categories:
The article is a derivative under the Creative Commons Attribution-ShareAlike License. A link to the original article can be found here and attribution parties here. By using this site, you agree to the Terms of Use. Gpedia Ⓡ is a registered trademark of the Cyberajah Pty Ltd.