List of weapons of the United States Marine Corps

This is a list of weapons used by the United States Marine Corps:

The basic infantry weapon of the United States Marine Corps is the M27 Infantry Automatic Rifle. Suppressive fire is provided by the M240B machine gun, at the squad and company levels respectively. Marines at the rank of E4 and above rate the M17 semi-automatic pistol. In addition, indirect fire is provided by the M203 grenade launcher in fireteams, M224a1 60 mm mortar in companies, and M252 81 mm mortar in battalions. The M2 .50 caliber heavy machine gun and MK19 automatic grenade launcher (40 mm) are available for use by dismounted infantry, though they are more commonly vehicle-mounted. Precision fire is provided by the M110 Semi-Automatic Sniper System and M40A3, A5, A6 bolt-action sniper rifle. [1]

The Marine Corps uses a variety of direct-fire rockets and missiles to provide infantry with an offensive and defensive anti-armor capability. The SMAW and AT4 are unguided rockets that can destroy armor and fixed defenses (e.g. bunkers) at ranges up to 500 meters. The FGM-148 Javelin and BGM-71 TOW are anti-tank guided missiles; both can utilize top-attack profiles to avoid heavy frontal armor and are heavy missiles effective past 2,000 meters that give infantry an offensive capability against armor.[2]

Some older weapons are used for ceremonial purposes, such as the Silent Drill Platoon's M1 Garands, or the use of the M101 howitzer for gun salutes. 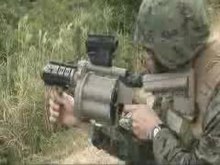 Play media
A Video of U.S. Marines training with the M32A1 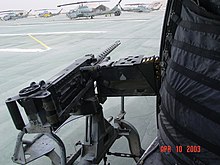 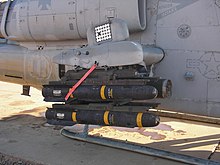 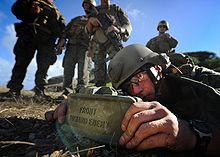 Marine emplaces a claymore mine 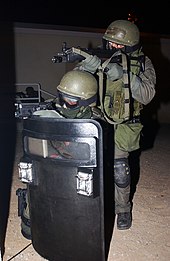 Marines with MARSOC, Force Reconnaissance, and MEU(SOC)s occasionally use specialized weapons that the rest of the fleet does not. In addition, some weapons are tested and evaluated in select units before acceptance and large-scale adoption. In a few cases, older weapons are brought out of retirement for limited use. 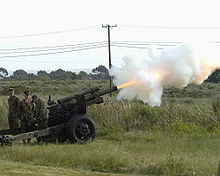 The U.S. Marine Corps still uses the M101, although for ceremonial purposes only. Here, U.S. Marines are seen firing off a M101 during a ceremony in March 2005.

Retrieved from "https://en.wikipedia.org/w/index.php?title=List_of_weapons_of_the_United_States_Marine_Corps&oldid=975771552"
Categories:
Hidden categories:
The article is a derivative under the Creative Commons Attribution-ShareAlike License. A link to the original article can be found here and attribution parties here. By using this site, you agree to the Terms of Use. Gpedia Ⓡ is a registered trademark of the Cyberajah Pty Ltd.