Louisa Catherine Adams (née Johnson; February 12, 1775 – May 15, 1852), was the First Lady of the United States from 1825 to 1829 during the presidency of John Quincy Adams. Born in London, she was the first First Lady to be born outside the United States, or the preceding Thirteen Colonies.

Adams was born Louisa Catherine Johnson on February 12, 1775, in London, the illegitimate daughter of Joshua Johnson, an American merchant from Maryland, whose brother Thomas Johnson later served as Governor of Maryland and United States Supreme Court Justice, and Catherine Newth, an Englishwoman, whose identity was long a mystery; her great-grandson Henry Adams joked that her existence was "one of the deepest mysteries of metaphysical theology."[1] Louisa had six sisters: Ann "Nancy," Caroline (mother of Union General Robert C. Buchanan), Harriet, Catherine, Elizabeth (second wife of United States Senator John Pope of Kentucky), and Adelaide, and a brother, Thomas. She grew up in London and Nantes, France, where the family took refuge during the American Revolution. 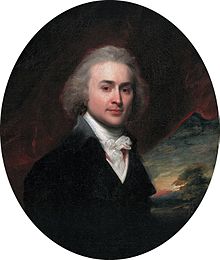 She met John Quincy Adams at her father's house in Cooper's Row, near Tower Hill, London. Her father had been appointed as United States consul general in 1790, and Adams first visited him in November 1795. Adams at first showed interest in her older sister but soon settled on Louisa. Adams, aged 30, married Louisa, aged 22, on July 26, 1797, at the parish church of All Hallows-by-the-Tower, on Tower Hill. Adams' father, John Adams, then President of the United States, eventually welcomed his daughter-in-law into the family, although they did not meet for several years.[2]

Her parents left Europe in 1797 and went to the U.S. When her father was forced into bankruptcy, President John Adams appointed him as U.S. Director of Stamps. Her father, who suffered from mental illness, died in Frederick, Maryland, in 1802 of severe fever, leaving little provision for his family. Her mother died in September 1811, in her mid-fifties,[3] and is buried in Rock Creek Cemetery.

John Quincy Adams and Louisa Adams had the following children:

Louisa was sickly, and suffered from migraine headaches and frequent fainting spells. She had several miscarriages over the course of her marriage. Having grown up in London and France, she found Massachusetts dull and provincial, and referred to the Adams family home as being "like something out of Noah's Ark". Nevertheless, she developed a warm affection for her father-in-law, and despite occasional differences, a deep respect for her mother-in-law Abigail Adams, whom she later described as "the guiding planet round which we all revolved".

She left her two older sons in Massachusetts for education in 1809 when she took two-year-old Charles Francis Adams to Russia, where Adams served as a Minister. Despite the glamour of the tsar's court, she had to struggle with cold winters, strange customs, limited funds, and poor health. An infant daughter born in 1811 died the next year. 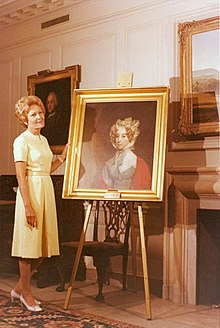 Louisa Adams' successor Pat Nixon acquired a portrait of the First Lady that now hangs in the White House.

Peace negotiations called Adams to Ghent in 1814 and then to London. To join him, she made a forty-day journey across war-ravaged Europe by coach in winter. Roving bands of stragglers and highwaymen filled her with "unspeakable terrors" for her son. The next two years gave her an interlude of family life in the country of her birth.

When John Quincy Adams was appointed James Monroe's Secretary of State in 1817, the family moved to Washington, D.C. where Louisa's drawing room became a center for the diplomatic corps and other notables. Music enhanced her Tuesday evenings at home, and theater parties contributed to her reputation as an outstanding hostess.

The pleasures of moving into the White House in 1825 were dimmed by the bitter politics of the election, paired with her deep depression. Though she continued her weekly "drawing rooms", she preferred quiet evenings of reading, composing music and verse, and playing her harp. As First Lady, she became reclusive and depressed. For a time, she regretted ever having married into the Adams family, the men of which she found cold and insensitive. The necessary entertainments were always elegant and her cordial hospitality made the last official reception a gracious occasion although her husband had lost his bid for re-election and partisan feeling still ran high.

In his diary for June 23, 1828, her husband recorded her "winding silk from several hundred silkworms that she has been rearing," evidently in the White House.[6]

She thought she was retiring to Massachusetts permanently, but in 1831 her husband began seventeen years of service in the United States House of Representatives. The untimely deaths of her two oldest sons added to her burdens.

"Our union has not been without its trials," John Quincy Adams conceded. He acknowledged many "differences of sentiment, of tastes, and of opinions in regard to domestic economy, and to the education of children between us." But added that "she always has been a faithful and affectionate wife, and a careful, tender, indulgent, and watchful mother to our children."

Her husband died at the United States Capitol in 1848. She remained in Washington until her death of a heart attack on May 15, 1852, at the age of 77. The day of her funeral was the first time both houses of the United States Congress adjourned in mourning for any woman.[7] She is entombed at her husband's side, along with her parents-in-law President John Adams and first lady Abigail Adams, in the United First Parish Church in Quincy, Massachusetts.

The First Spouse Program under the Presidential $1 Coin Act authorizes the United States Mint to issue 1/2-ounce $10 gold coins and medal duplicates[9] to honor the first spouses of the United States. Louisa Adams' coin was released May 29, 2008.

Retrieved from "https://en.wikipedia.org/w/index.php?title=Louisa_Adams&oldid=977967011"
Categories:
Hidden categories:
The article is a derivative under the Creative Commons Attribution-ShareAlike License. A link to the original article can be found here and attribution parties here. By using this site, you agree to the Terms of Use. Gpedia Ⓡ is a registered trademark of the Cyberajah Pty Ltd.