Jump to navigation Jump to search
For the band, see Lying in States.

Lying in state is the tradition in which the body of a dead official is placed in a state building, either outside or inside a coffin, to allow the public to pay their respects. It traditionally takes place in the principal government building of a country, state, or city. While the practice differs among countries, a viewing in a location other than the principal government building may be referred to as lying in repose.[1]

In Canada, official lying in state is a part of a state funeral, an honor generally reserved for former Governors General and former Prime Ministers. It is held in the Centre Block of Parliament Hill, in the national capital, Ottawa, Ontario. Ex-governors general lie in state in the Senate Chamber while former prime ministers lie in the Hall of Honour. During the period of lying in state, the coffins are flanked at each corner by a Guard of honour, made up of four members drawn from the Canadian Forces and Royal Canadian Mounted Police, as well as members of the Governor General's Foot Guards for former governors general, and guards from the parliamentary security forces for former prime ministers. Guards stand at each corner with heads bowed and weapons inverted (resting on Arms reversed) with their backs turned towards the casket.

Provinces may also mount state funerals and have a lying in state for a distinguished former resident. For instance, Maurice Richard, nationally known hockey player, was given a state funeral by the province of Quebec when he died in 2000; his coffin lay in state at the Molson Centre.[2] This process was repeated for fellow Canadiens legend Jean Béliveau in December 2014.

In North Korea, the body of the late leader Kim Jong-il was displayed in a glass coffin surrounded with red flowers at the Kumsusan Memorial Palace in Pyongyang prior to his funeral, which began and ended at the palace. An honor guard armed with AK-47s was present. Jong-il's father Kim Il-sung, the founding president, is on display elsewhere in the palace.[3]

In Russia, during the time of the Soviet Union (1917–1991), the state funerals of the most senior political and military leaders, such as Vladimir Lenin, Joseph Stalin, Leonid Brezhnev, Yuri Andropov, and Konstantin Chernenko all followed the same basic outline. They took place in Moscow, beginning with a public lying in state of the deceased in the House of the Unions, and ending with an interment at Red Square.

For the lying in state at the House of the Unions, the coffin would be placed on display in the Column Hall, which would be decorated by flowers, numerous red flags and other communist symbols. The mourners, which usually would be brought in by the thousands, shuffled up a marble staircase beneath chandeliers draped in black gauze. On the stage at the left side of the Column Hall, a full orchestra in black tailcoats played classical music. The deceased's embalmed body, dressed in a black suit, white shirt and a tie, was displayed in an open coffin on a catafalque banked with carnations, red roses and tulips, facing the queue of mourners. A small guard of honour would be in attendance in the background. At the right side of the hall, seats were placed for guests of honour, with the front row reserved for the dead leader's family.

On the day of the funeral, a military funeral parade would take place during which the coffin would be conveyed from the House of the Unions to Red Square where burial would take place. Lenin and Stalin were placed inside the Lenin Mausoleum, while Brezhnev, Andropov, and Chernenko were interred in individual graves in the Kremlin Wall Necropolis.

At state funerals in Singapore, the national flag is put on the coffin. The vigil guard may be deployed during the public lying in state of the deceased person at Parliament House. The deployment of the vigil guard is the highest form of respect accorded by the nation to the deceased. Similar to British traditions, the vigil guard is composed of groups of five commissioned officers from the Singapore Armed Forces (SAF) and Singapore Police Force (SPF) who stand guard around the clock in shifts of 30 minutes. One of the five officers stands facing outward at each of the four corners of the casket, while the fifth and most senior one stands in front and faces inward. Their heads are bowed and their ceremonial swords are inverted.[4]

Nelson Mandela was the first democratically elected president to lie in state in South Africa. The event took place at the Union Buildings, the same site where he was inaugurated as the President of South Africa on May 10, 1994. The body of Mandela was lying in State for three days, starting on Wednesday, December 11, 2013 and ending Friday, December 13. The body was viewed by thousands of South Africans before it was airlifted to Qunu in the Eastern Cape where Mandela was buried on December 15, 2013.

See also: State funerals in the United Kingdom and Vigil of the Princes 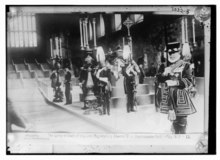 The lying-in-state of King Edward VII in Westminster Hall, May 1910.

In state and ceremonial funerals in the United Kingdom, the lying-in-state takes place in Westminster Hall. The coffin is placed on a catafalque and is guarded, around the clock, by detachments, each of four men, from the following units:

Each unit mans the guard for a total of six hours, with each detachment standing post for twenty minutes. The four men stand at each corner with heads bowed and weapons inverted; their backs are turned towards the coffin.

The first British monarch to lie-in-state at Westminster Hall was King Edward VII in 1910, apparently inspired by William Gladstone who had lain-in-state in the hall in 1898.[9]

Lying in state in the United States is the rare honor either authorized by a congressional resolution or approved by the congressional leadership, when permission is granted by survivors,[10] to a deceased member of government (or former member) whereby his or her remains are placed in the rotunda of the United States Capitol in Washington, D.C. for public viewing. The casket is guarded by members of the armed forces. By regulation and custom, only Presidents, military commanders, and members of Congress are granted the honor of lying in state. Except for Presidents and former Presidents, the honor is not automatic. Not all those entitled to the honor have it accepted by their survivors. The first leader to receive this honor was Henry Clay, former Speaker of the House of Representatives, when he died in 1852. Since then, the honor has been extended to 32 people, including 12 Presidents, and four Unknown Soldiers, representing U.S. service members who have died without their remains being identified, and Rosa Parks, the first woman to receive this honor.[11]

Some U.S. states and cities extend similar honors. For example, in the state of Hawaii, three people have lain in state at the Hawaii State Capitol, among which include famous Hawaiian singer Israel Kamakawiwoʻole upon his death in 1997, and the aforementioned Daniel Inouye, President pro tempore of the U.S. Senate and Senator from Hawaii. Similarly, after the death of U.S. Senator John McCain on August 25, 2018, at the age of 81 years, 361 days, it was announced that he would lie in state at the State Capitol in his home state of Arizona on August 29 (which would have been John McCain's 82nd birthday) before receiving the same honor at the U.S. Capitol two days later.[12]

In the City of San Francisco, California, Mayor Ed Lee lay in state at the Rotunda of San Francisco City Hall after his death in office on December 12, 2017, at the age of 65 years, 221 days. 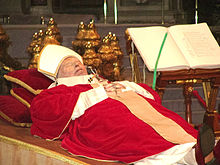 A deceased pope customarily lies in state in the chapel of the Apostolic Palace and then in St. Peter's Basilica, between the holding of a Mass of Visitation and a Requiem Mass.[citation needed] The funeral of Pope John Paul II was an example of this custom.

The Coptic Orthodox Church of Alexandria has a tradition of mummifying the deceased pope and placing his body on his throne to enable church followers to have a farewell look at him for a short period of time. This tradition is one of the ways that ancient Egyptian rituals have survived in the Egyptian church. [13]

Retrieved from "https://en.wikipedia.org/w/index.php?title=Lying_in_state&oldid=925718098"
Categories:
Hidden categories:
The article is a derivative under the Creative Commons Attribution-ShareAlike License. A link to the original article can be found here and attribution parties here. By using this site, you agree to the Terms of Use. Gpedia Ⓡ is a registered trademark of the Cyberajah Pty Ltd.