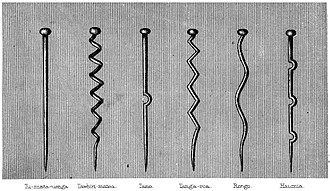 Māori mythology and Māori traditions are the two major categories into which the legends of the Māori of New Zealand may usefully be divided. The rituals, beliefs, and the world view of Māori society were ultimately based on an elaborate mythology that had been inherited from a Polynesian homeland and adapted and developed in the new setting (Biggs 1966:448).

Few records survive of the extensive body of Māori mythology and tradition from the early years of European contact. The missionaries had the best opportunity to get the information, but failed to do so at first, in part because their knowledge of the language was imperfect. Most of the missionaries who did master the language were unsympathetic to Māori beliefs[citation needed], regarding them as 'puerile beliefs', or even 'works of the devil'.[citation needed] Exceptions to this general rule were J. F. Wohlers of the South Island,[1] Richard Taylor, who worked in the Taranaki and Wanganui River areas, and William Colenso who lived at the Bay of Islands and also in Hawke's Bay. "The writings of these men are among our best sources for the legends of the areas in which they worked" (Biggs 1966:447).

In the 1840s Edward Shortland, Sir George Grey, and other non-missionaries began to collect the myths and traditions. At that time many Māori were literate in their own language and the material collected was, in general, written by Māori themselves in the same style as they spoke. The new medium seems to have had minimal effect on the style and content of the stories. Genealogies, songs, and narratives were written out in full, just as if they were being recited or sung. Many of these early manuscripts have been published, and as of 2012[update] scholars have access to a great body of material (more than for any other area of the Pacific) containing multiple versions of the great myth cycles known in the rest of Polynesia, as well as of the local traditions pertaining only to New Zealand. A great deal of the best material is found in two books, Nga Mahi a nga Tupuna (The Deeds of the Ancestors), collected by Sir George Grey and translated as Polynesian Mythology; and Ancient History of the Māori (six volumes), edited by John White (Biggs 1966:447).[2]

Forms of the legends

The three forms of expression prominent in Māori and Polynesian oral literature are genealogical recital, poetry, and narrative prose.

The reciting of genealogies (whakapapa) was particularly well developed in Māori oral literature, where it served several functions in the recounting of tradition. Firstly it served to provide a kind of time scale which unified all Māori myth, tradition, and history, from the distant past to the present. It linked living people to the gods and the legendary heroes. By quoting appropriate genealogical lines, a narrator emphasised his or her connection with the characters whose deeds were being described, and that connection also proved that the narrator had the right to speak of them. "In the cosmogonic genealogies, to be described later, genealogical recital is revealed as a true literary form. What appears at first sight to be a mere listing of names is in fact a cryptic account of the evolution of the universe"' (Biggs 1966:447).

Māori poetry was always sung or chanted; musical rhythms rather than linguistic devices served to distinguish it from prose. Rhyme or assonance were not devices used by the Māori; only when a given text is sung or chanted will the metre become apparent. The lines are indicated by features of the music. The language of poetry tends to differ stylistically from prose. Typical features of poetic diction are the use of synonyms or contrastive opposites, and the repetition of key words. "Archaic words are common, including many which have lost any specific meaning and acquired a religious mystique. Abbreviated, sometimes cryptic utterances and the use of certain grammatical constructions not found in prose are also common" (Biggs 1966:447-448).

Prose narrative forms the great bulk of Māori legendary material. Some appears to have been sacred or esoteric, but many of the legends were well-known stories told as entertainment in the long nights of winter. "Nevertheless, they should not be regarded simply as fairy tales to be enjoyed only as stories. The Māui myth, for example, was important not only as entertainment but also because it embodied the beliefs of the people concerning such things as the origin of fire, of death, and of the land in which they lived. The ritual chants concerning firemaking, fishing, death, and so on made reference to Māui and derived their power from such reference" (Biggs 1966:448). 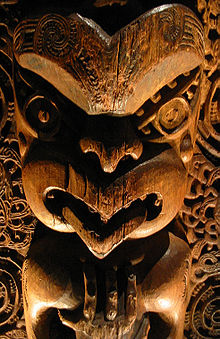 Detail from a tāhūhū (ridgepole of a house), Ngāti Awa, Bay of Plenty, New Zealand, circa 1840. Believed to represent one of two ancestors: Tūwharetoa or Kahungunu.

Myths are set in the remote past and their content often have to do with the supernatural. They present Māori ideas about the creation of the universe and the origins of gods and of people. The mythology accounts for natural phenomena, the weather, the stars and the moon, the fish of the sea, the birds of the forest, and the forests themselves. Much of the culturally institutioned behaviour of the people finds its sanctions in myth. "Perhaps the most distinctive feature of myth, as distinct from tradition, is its universality. Each of the major myths is known in some version not only throughout New Zealand but also over much of Polynesia as well" (Biggs 1966:448).

The Māori understanding of the development of the universe was expressed in genealogical form. These genealogies appear in many versions, in which several symbolic themes constantly recur. "Evolution may be likened to a series of periods of darkness (pō) or voids (kore), each numbered in sequence or qualified by some descriptive term. In some cases the periods of darkness are succeeded by periods of light (ao). In other versions the evolution of the universe is likened to a tree, with its base, tap roots, branching roots, and root hairs. Another theme likens evolution to the development of a child in the womb, as in the sequence “the seeking, the searching, the conception, the growth, the feeling, the thought, the mind, the desire, the knowledge, the form, the quickening”. Some, or all, of these themes may appear in the same genealogy" (Biggs 1966:448). The cosmogonic genealogies are usually brought to a close by the two names Rangi and Papa (father sky and mother earth). The marriage of this celestial pair produced the gods and, in due course, all the living things of the earth (Biggs 1966:448).

The earliest full account of the origins of gods and the first human beings is contained in a manuscript entitled Nga Tama a Rangi (The Sons of Heaven), written in 1849 by Wī Maihi Te Rangikāheke, of the Ngāti Rangiwewehi tribe of Rotorua. The manuscript "gives a clear and systematic account of Māori religious beliefs and beliefs about the origin of many natural phenomena, the creation of woman, the origin of death, and the fishing up of lands. No other version of this myth is presented in such a connected and systematic way, but all early accounts, from whatever area or tribe, confirm the general validity of the Rangikāheke version. It begins as follows: 'My friends, listen to me. The Māori people stem from only one source, namely the Great-heaven-which-stands-above, and the Earth-which-lies-below. According to Europeans, God made heaven and earth and all things. According to the Māori, Heaven (Rangi) and Earth (Papa) are themselves the source' " (Biggs 1966:448).[3]

According to Biggs (1966:448), the main corpus of Māori mythology unfolds in three story complexes or cycles, which are:

"Every Māori social group had its own body of traditional belief which validated its claims to the territory it occupied, gave authority to those of high rank, and justified the group's external relationships with other groups. These purposes were served because the members of the groups concerned believed that the traditions were true records of past events, and they acted accordingly. Alliances between groups were facilitated if it was believed that they shared a common heritage, and the commoner's respect for and fear of his chief were based, in part at least, on his belief in the semi-divine ancestry of those of high rank" (Biggs 1966:450).

"Traditions, as opposed to myths, tell of incidents which are for the most part humanly possible. Genealogical links with the present place them within the past millennium. They are geographically located in New Zealand and knowledge of them is confined to this country" (Biggs 1966:448).

There were two major discovery or origin traditions. One of these traditions names Kupe as the discoverer of New Zealand. The second group of traditions regards Toi as the first important origin ancestor. "Both traditions were current over wide but apparently complementary areas of the North Island. Attempts to place the two in a single chronological sequence are misguided, since there is no reliable evidence that they ever formed part of the same body of traditional lore" (Biggs 1966:451).

Each tribal group, whether tribe or subtribe, maintained its discrete traditional record, which generally concerned "great battles and great men"; these stories were linked together by genealogy, which in Māori tradition is an elaborate art. "In some cases the story is continuous and internally consistent from the migration down to the present. In other cases it is fragmentary and discontinuous earlier than about 1600" (Biggs 1966:453).

Retrieved from "https://en.wikipedia.org/w/index.php?title=Māori_mythology&oldid=945485896"
Categories:
Hidden categories:
The article is a derivative under the Creative Commons Attribution-ShareAlike License. A link to the original article can be found here and attribution parties here. By using this site, you agree to the Terms of Use. Gpedia Ⓡ is a registered trademark of the Cyberajah Pty Ltd.