The M621 is a short loop of motorway in England that takes traffic into central Leeds between the M1 and M62 motorways.

When the M1 was diverted away from Leeds when the 'M1 – A1 Lofthouse to Bramham' extension opened in 1999[2] adjustments were made to Junction 3 and the Leeds section of the M1 was re-designated as M621 (Junctions 3–7).[1] 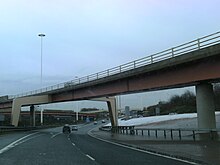 A view of central Leeds from the M621, Junction 6

Looking north east with Leeds in the distance

Retrieved from "https://en.wikipedia.org/w/index.php?title=M621_motorway&oldid=917724556"
Categories:
Hidden categories:
The article is a derivative under the Creative Commons Attribution-ShareAlike License. A link to the original article can be found here and attribution parties here. By using this site, you agree to the Terms of Use. Gpedia Ⓡ is a registered trademark of the Cyberajah Pty Ltd.