Mace of the United States House of Representatives

The Mace of the US House of Representatives 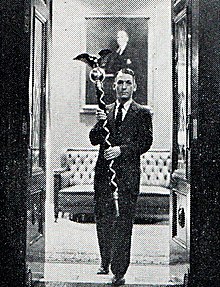 A man holding the mace, to show scale

The design of the mace is derived from an ancient battle weapon and the Roman fasces. The ceremonial mace is 46 inches (120 cm) high and consists of 13 ebony rods—representing the original 13 states of the Union—bound together by silver strands criss-crossed over the length of the pole. The rods are bound together by four crossing ribbons of silver, pinned together and held at the bottom and at the top by silver bands. The bands are decorated with floral borders and a repoussé design. The name “Wm. Adams/Manufacturer/New York/1841.” is engraved in the cartouche, located in the front center of the bottom band. This shaft is topped by a silver globe 4-1/2 inches in diameter and engraved with the seven continents, the names of the oceans, lines of longitude, and the major lines of latitude. The Western Hemisphere faces the front. The globe is encircled with a silver rim marked with the degrees of latitude, on which is perched an engraved solid silver eagle with a wingspan of 15 inches. The total weight of the mace is 10 pounds.[5]

Sitting above the ebony rods of the mace is a cast-silver globe, which holds an eagle with spread wings. The continents are etched into the globe, with North America facing front. The eagle, the national bird, is cast in solid silver.

In accordance with the House Rules, on the rare occasion that a member becomes unruly, the Sergeant at Arms, upon order of the Speaker, lifts the mace from its pedestal and presents it before the offenders, thereby restoring order.

There have been at least six instances where the Mace was used to quell disorder. The first known usage of the original mace occurred at the Congress Hall in Philadelphia on January 30, 1798, during a fight between Matthew Lyon of Vermont and Roger Griswold of Connecticut, after which Lyon faced an unsuccessful expulsion vote.[6]

The mace was used to restore order on the House floor on the evening of January 31, 1877, during a special session regarding the election in Florida. Tensions flared and Speaker Samuel Randall "was unable to stop the Members from running from desk to desk, while conducting loud conversations." The Sergeant at Arms presented the Mace, but to little effect. House rules state that Members should be arrested when ignoring the authority of the Mace, but in this case since there were so many members involved, the Speaker adjourned the session.[6]

In 1880, as the House met to discuss a funding bill as the Committee of the Whole, James B. Weaver of Iowa and William A.J. Sparks of Illinois became involved in a heated discussion, with members attempting to keep them apart. The Speaker ordered the Sergeant at Arms to walk about the floor of the House with the Mace, and order was restored. It was used twice in the 1890s in incidents involving Representative Charles L. Bartlett, a fiery Georgia Democrat who hurled a volume of laws at one colleague and brandished a knife at another.[7]

House records indicate that the mace was last used to restore order during World War I when Representative J. Thomas (Cotton Tom) Heflin of Alabama suggested that some of his colleagues had been unpatriotic in voting against a resolution to enter the war.[8]

A threat to present the mace was made on July 29, 1994, when Rep. Maxine Waters declined to stop speaking. The Speaker Pro Tem, Rep. Carrie Meek, threatened "to present the mace"; Waters left the floor shortly thereafter, and Meek said that she had been about to order the sergeant-at-arms to present it.[9][10]

The symbol of the Mace may be used by Speaker of the United States House of Representatives during press conferences and official communications.[citation needed] During the 2019 State of the Union Address, Nancy Pelosi wore a brooch styled after the Mace, presumably as a symbol of her authority as Speaker.[11] Speaker Pelosi wore the same brooch on December 18, 2019, for the session in which the House debated and approved two articles of impeachment of Donald Trump.[12][13] She also wore the brooch on February 4, 2020 during the 2020 State of the Union Address. [14] On January 15, 2021, Pelosi wore the brooch signalling to members of Congress that an investigation with likely disciplinary action lay ahead.[15]

Retrieved from "https://en.wikipedia.org/w/index.php?title=Mace_of_the_United_States_House_of_Representatives&oldid=1000719568"
Categories:
Hidden categories:
The article is a derivative under the Creative Commons Attribution-ShareAlike License. A link to the original article can be found here and attribution parties here. By using this site, you agree to the Terms of Use. Gpedia Ⓡ is a registered trademark of the Cyberajah Pty Ltd.