Maclura pomifera, commonly known as the Osage orange, hedge, or hedge apple tree is a small deciduous tree or large shrub, typically growing to 8 to 15 metres (30–50 ft) tall. The distinctive fruit, from a multiple fruit family, is roughly spherical, bumpy, 8 to 15 centimetres (3–6 in) in diameter, and turns bright yellow-green in the fall. The fruits secrete a sticky white latex when cut or damaged. Despite the name "Osage orange",[3] it is only distantly related to the orange,[4] but rather is a member of the mulberry family, Moraceae.[5] Due to its latex secretions and woody pulp, the fruit is typically not eaten by humans and rarely by foraging animals, giving it distinction as an anachronistic "ghost of evolution".[6]

The earliest account of the tree in the English language was given by William Dunbar, a Scottish explorer, in his narrative of a journey made in 1804 from St. Catherine's Landing on the Mississippi River to the Ouachita River.[10] It was a curiosity when Meriwether Lewis sent some slips and cuttings to President Jefferson in March 1804. According to Lewis's letter, the samples were donated by "Mr. Peter Choteau, who resided the greater portion of his time for many years with the Osage Nation." Those cuttings did not survive. In 1810, Bradbury relates that he found two Maclura pomifera trees growing in the garden of Pierre Chouteau, one of the first settlers of St. Louis, apparently the same person.[10]

American Settlers used the Osage orange (i.e. "hedge apple") as a hedge to exclude free-range livestock from vegetable gardens and corn fields. Under severe pruning, the hedge apple sprouted abundant adventitous shoots from its base; as these shoots grew, they were interwoven to form a dense thorny barrier hedge. For this reason, the thorny Osage orange tree was widely naturalized throughout the United States until this usage was superseded by the invention of barbwire in 1874.[11][3][12][13]

The trees acquired the name bois d'arc, or "bow-wood",[3] from early French settlers who observed the wood being used for war clubs and bow-making by Native Americans.[10] Meriwether Lewis was told that the people of the Osage Nation, "So much … esteem the wood of this tree for the purpose of making their bows, that they travel many hundreds of miles in quest of it."[14] The trees are also known as "bodark," "bodarc," or "bodock" trees, most likely originating from a corruption of "bois d'arc."[3] The Comanches also used this wood for their bows.[15] It was popular with them because it was strong, flexible and durable,[3] and was common along river bottoms of the Comanchería. Some historians believe that the high value this wood had to Native Americans throughout North America for the making of bows, along with its small natural range, contributed to the great wealth of the Spiroan Mississippian culture that controlled all the land in which these trees grew.[16]

The genus Maclura is named in honor of William Maclure[9] (1763–1840), a Scottish-born American geologist. The specific epithet pomifera means "fruit-bearing".[9] The common name Osage derives from Osage Native Americans from whom young plants were first obtained, as told in the notes of Meriwether Lewis in 1804.[13]

Mature trees range from 12 to 20 metres (40–65 ft) tall with short trunks and round-topped canopies.[3] The roots are thick, fleshy, and covered with bright orange bark. The tree's mature bark is dark, deeply furrowed and scaly. The plant has significant potential to invade unmanaged habitats.[3]

The wood of M. pomifera is bright orange-yellow with paler yellow sapwood. The wood is heavy, hard, strong, and flexible, capable of receiving a fine polish and very durable in contact with the ground. It has a specific gravity of 0.7736 or 773.6 kg/m3 (48.29 lb/cu ft).

Leaves are arranged alternately in a slender growing shoot 90 to 120 centimetres (3–4 ft) long. In form they are simple, a long oval terminating in a slender point. The leaves are 8 to 13 centimetres (3–5 in) long and 5 to 8 centimetres (2–3 in) wide, and are thick, firm, dark green, shining above, and paler green below when full grown. In autumn they turn bright yellow. The leaf axils contain formidable spines which when mature are about 2.5 centimetres (1 in) long.

Branchlets are at first bright green and pubescent; during their first winter they become light brown tinged with orange, and later they become a paler orange brown. Branches contain a yellow pith, and are armed with stout, straight, axillary spines. During the winter, the branches bear lateral buds that are depressed-globular, partly immersed in the bark, and pale chestnut brown in color.

As a dioecious plant, the inconspicuous pistillate (female) and staminate (male) flowers are found on different trees. Staminate flowers are pale green, small, and arranged in racemes borne on long, slender, drooping peduncles developed from the axils of crowded leaves on the spur-like branchlets of the previous year. They feature a hairy, four-lobed calyx; the four stamens are inserted opposite the lobes of calyx, on the margin of a thin disk. Pistillate flowers are borne in a dense spherical many-flowered head which appears on a short stout peduncle from the axils of the current year's growth. Each flower has a hairy four-lobed calyx with thick, concave lobes that invest the ovary and enclose the fruit. Ovaries are superior, ovate, compressed, green, and crowned by a long slender style covered with white stigmatic hairs. The ovule is solitary.

The mature multiple fruit's size and general appearance resembles a large, yellow-green orange, 10 to 13 centimetres (4–5 in) in diameter, with a roughened and tuberculated surface. The compound fruit is a syncarp of numerous small drupes, in which the carpels (ovaries) have grown together. Each small drupe is oblong, compressed and rounded; they contain a milky latex which oozes when the fruit is damaged or cut.[6] The seeds are oblong. Although the flowering is dioecious, the pistillate tree when isolated will still bear large oranges, perfect to the sight but lacking the seeds.[10] The fruit has a cucumber-like flavor.[6] 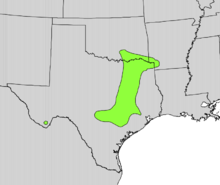 Osage orange's pre-Columbian range was largely restricted to a small area in what is now the United States, namely the Red River drainage of Oklahoma, Texas, and Arkansas, as well as the Blackland Prairies and post oak savannas.[3] A disjunct population also occurred in the Chisos Mountains of Texas.[17] It has since become widely naturalized in the United States and Ontario, Canada.[3] Osage orange has been planted in all the 48 contiguous states of the United States and in southeastern Canada.[17]

The largest known Osage orange tree is located at River Farm, in Alexandria, Virginia, and is believed to have been a gift from Thomas Jefferson.[18] Another historic tree is located on the grounds of Fort Harrod, a Kentucky pioneer settlement in Harrodsburg, Kentucky.[19]

Because of the current limited range and lack of obvious effective means of propagation, the Osage orange is considered to be an evolutionary anachronism, where one or more now extinct Pleistocene megafauna evolutionary partners, such as the giant ground sloth, mammoth, mastodon or gomphothere, fed on the fruit and aided in seed dispersal.[20][16][21] An equine species that became extinct at the same time also has been suggested as the plant's original dispersal agent because modern horses and other livestock will sometimes eat the fruit.[6] However, a 2015 study indicated that Osage orange seeds are not effectively spread by horses or elephant species.[22]

The fruit is not poisonous to humans or livestock, but is not preferred by them,[23] because it is mostly inedible due to a large size (about the diameter of a softball), and hard, dry texture.[6] The edible seeds of the fruit are used by squirrels as food.[24] Large animals such as livestock, which typically would consume fruits and disperse seeds, mainly ignore the fruit.[6]

The fruits are consumed by black-tailed deer in Texas and fox squirrels in the Midwest, who drop them to crack open. Crossbills are said to peck the seeds out.[25]

Maclura pomifera prefers a deep and fertile soil, but is hardy over most of the contiguous United States, where it is used as a hedge. It must be regularly pruned to keep it in bounds, and the shoots of a single year will grow one to two metres (3–6 ft) long, making it suitable for coppicing.[10][26] A neglected hedge will become fruit-bearing. It is remarkably free from insect predators and fungal diseases.[10] A thornless male cultivar of the species exists and is vegetatively reproduced for ornamental use.[17] M. pomifera is cultivated in Italy, former Yugoslavia, Romania, former USSR, and India.[27]

Osajin and pomiferin are isoflavones present in the wood and fruit in an approximately 1:2 ratio by weight, and in turn comprise 4-6% of the weight of dry fruit and wood samples.[28] Primary components of fresh fruit include pectin (46%), resin (17%), fat (5%), and sugar (before hydrolysis, 5%).[29] The moisture content of fresh fruits is about 80%.[29] 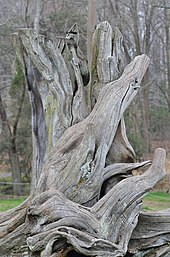 The Osage orange is commonly used as a tree row windbreak in prairie states, which gives it one of its colloquial names, "hedge apple".[3] It was one of the primary trees used in President Franklin Delano Roosevelt's "Great Plains Shelterbelt" WPA project, which was launched in 1934 as an ambitious plan to modify weather and prevent soil erosion in the Great Plains states, and by 1942 resulted in the planting of 30,233 shelterbelts containing 220 million trees that stretched for 18,600 miles (29,900 km).[30] The sharp-thorned trees were also planted as cattle-deterring hedges before the introduction of barbed wire and afterward became an important source of fence posts.[9][31] In 2001, its wood was used in the construction in Chestertown, Maryland of the Schooner Sultana, a replica of HMS Sultana.[32]

The heavy, close-grained yellow-orange wood is dense and prized for tool handles, treenails, fence posts, and other applications requiring a strong dimensionally stable wood that withstands rot.[3][33] Although its wood is commonly knotty and twisted, straight-grained Osage orange timber makes good bows, as once used by Native Americans.[3] John Bradbury, a Scottish botanist who had traveled the interior United States extensively in the early 19th century, reported that a bow made of Osage timber could be traded for a horse and a blanket.[10] Additionally, a yellow-orange dye can be extracted from the wood, which can be used as a substitute for fustic and aniline dyes. At present, florists use the fruits of M. pomifera for decorative purposes.[34]

When dried, the wood has the highest heating value of any commonly available North American wood, and burns long and hot.[35][36][37]

Unlike many woods, Osage orange wood is durable, making good fence posts.[3] They are generally set up green because the dried wood is too hard to reliably accept the staples used to attach the fencing to the posts. Palmer and Fowler's Fieldbook of Natural History 2nd edition, rates Osage orange wood as being at least twice as hard and strong as white oak (Quercus alba). Its dense grain structure makes for good tonal properties. Production of woodwind instruments and waterfowl game calls are common uses for the wood.[38]

A chemistry professor at the University of Alabama claimed that a single osage orange placed in a room would drive away cockroaches.[25] Research has shown that compounds extracted from the fruit, when concentrated, may repel insects. However, the naturally occurring concentrations of these compounds in the fruit are far too low to make the fruit an effective insect repellent.[23][39][40] In 2004, the EPA insisted that a website selling M. pomifera fruits online remove any mention of their supposed pesticidal properties as false advertisements.[34]

Retrieved from "https://en.wikipedia.org/w/index.php?title=Maclura_pomifera&oldid=966096875"
Categories:
Hidden categories:
The article is a derivative under the Creative Commons Attribution-ShareAlike License. A link to the original article can be found here and attribution parties here. By using this site, you agree to the Terms of Use. Gpedia Ⓡ is a registered trademark of the Cyberajah Pty Ltd.