(Redirected from Marching through Georgia)
Jump to navigation Jump to search
For the novel by S.M. Stirling, see Marching Through Georgia (novel).

"Marching Through Georgia" (sometimes spelled as "Marching Thru' Georgia" or "Marching Thro Georgia") is a marching song written by Henry Clay Work at the end of the American Civil War in 1865. The title and lyrics of the song refer to U.S. Army major general William T. Sherman's "March to the Sea" to capture the Confederate city of Savannah, Georgia in late 1864.

The song became widely popular with Union Army veterans after the American Civil War. The song, sung from the point of view of a Union soldier, tells of marching through Georgian territory, freeing slaves, meeting Southern Unionist men glad to once again see the U.S. flag, and punishing the Confederacy for their starting the war.

After the war, in parts of the southern United States, and particularly in Georgia, the song came to symbolize the devastation and political domination the Union wrought upon the Confederacy and southern U.S. states during the war. Coincidentally, Sherman himself came to dislike "Marching Through Georgia", in part because it was played at almost every public appearance that he attended. In fact, it was even played at his funeral.[1][2] Outside of the Southern United States, it had a widespread appeal: Japanese troops sang it as they entered Port Arthur[3], the British Army sang it in India, and a British town mistakenly thought the tune was appropriate to welcome southern American troops in World War II.[4]

A postcard from the early 20th century featuring the song.

The song remains popular with brass bands, and its tune has been adapted to other popular songs, including the controversial, sectarian anthem of Glasgow Rangers Football Club "Billy Boys" and "Come In, Come In". It was also sung by a Black Northern transplant (or “carpetbagger,” the term used in pseudohistorical and fictional accounts aligned with the Lost Cause) played by Ernest Whitman in the film Gone with the Wind, and Ann Sheridan in Dodge City.

In the United Kingdom, the tune is used for the Georgist anthem, The Land, the de facto party song of the Liberal Democrats and of the former Liberal Party. Liberal Assemblies and Liberal Democrat Conferences were formerly closed with the song, and the song continues to be a favourite at the conference Glee Club. David Lloyd George used the tune for his campaign song George and Gladstone in his first election campaign in 1890.[5]

An anglicised version of the song was recorded between 1901 and 1903 during the Second Anglo Boer War. This version, although almost identical, included alternate lyrics and was issued as "Marching On Pretoria" on the Zonophone label.[6]

George M. Cohan referenced the "Hurrah! Hurrah!" line in one of the verses of "You're a Grand Old Flag", juxtaposed with a line from "Dixie".

In 1919 the song was adapted with lyrics by Tomomichi Soeda and Shogetsu Watanabe as Tokyo Bushi (Pai, pai, no pai), which subsequently became a perennially popular shin min'yō standard. The song was featured in the soundtrack to the film The Flower and the Angry Waves by Seijun Suzuki.

The Finnish protest song "Laiva Toivo, Oulu" (English: "The Ship Hope, Oulu") is set to the melody of "Marching Through Georgia", but with Finnish-language lyrics criticizing the actions of the captain of the titular frigate Toivo.[7]

The song is referenced in the title of two alternate history novels. S. M. Stirling's Marching Through Georgia references the title, and Ward Moore's Bring the Jubilee references the chorus.

In 1924, guitar and harmonica player Charlie Oaks released "Marching Through Flanders" for the Vocalion label (Vocalion 15104). It bears an identical melody to "Marching Through Georgia", but details the exploits of American troops in Belgium during World War I.

On October 12, 1929, for the first football game at Sanford Stadium at the University of Georgia, Yale University was heavily favored. The Yale Band had planned to play "Marching Through Georgia," but Yale lost 15-0, and the band had to play something else.

Composer Scott Bradley quoted it in his MGM cartoon scores of the 1940s, including the Oscar-winning Tom and Jerry short "Yankee Doodle Mouse" (1943) and Tex Avery's "King-Size Canary" (1947). In the latter he ironically juxtaposed it with the tune of "Yankee Doodle".

In the classic western movie Shane (1953), ex-Confederate Frank "Stonewall" Torrey (Elisha Cook, Jr.) is goaded by another, harmonica-playing, character with an impromptu rendition of "Marching Through Georgia". In the 1966 Howard Hawks western El Dorado, the character Bull, in response to being shot at from a bell-laden church tower and then asked to provide cover, proclaims, "Well, just give me another gun and I'll play "Marching Through Georgia."

At the end of Game 5 of the 1996 World Series, after Paul O'Neill caught the final out of the game by robbing Luis Polonia of a potential game-tying (or winning) hit, Vin Scully, who called the World Series on CBS Radio, announced that the New York Yankees had been "marching through Georgia, and where have we heard that before?" 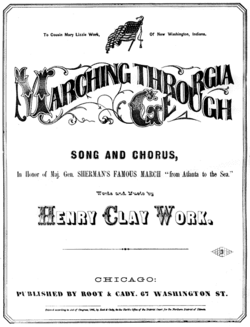 Cover of the 1865 sheet music to "Marching Through Georgia". 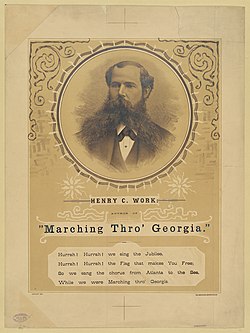 Cover of the 1887 sheet music to "Marching Through Georgia".

One version of the chorus for Come In is as follows:

Come in, come in, I'll do the best I can
Come in, come in, bring the whole bloody clan
Take it slow and easy, and I'll shake you by the hand
Set you down, I'll treat you decent, I'm an Ulsterman

The first verse and chorus from "The Land" is as follows:

Sound the call for freedom boys, and sound it far and wide,
March along to victory, for God is on our side,
While the voice of nature thunders o'er the rising tide:
"God gave the land to the people."

One verse from this adaptation, occasionally sung by members of the Industrial Workers of the World, is as follows:

Come with us, you workingmen, and join the rebel band;
Come, you discontented ones, and give a helping hand,
We march against the parasite to drive him from the land,
With one big industrial union!

The song was interpolated into The United States of America's "The American Metaphysical Circus".

Retrieved from "https://en.wikipedia.org/w/index.php?title=Marching_Through_Georgia&oldid=966986050"
Categories:
Hidden categories:
The article is a derivative under the Creative Commons Attribution-ShareAlike License. A link to the original article can be found here and attribution parties here. By using this site, you agree to the Terms of Use. Gpedia Ⓡ is a registered trademark of the Cyberajah Pty Ltd.