Today's Marine Raiders first saw the light through a pilot program called The Marine Corps Special Operations Command Detachment One (MCSOCOM Detachment One or Det 1). In order to first assess the value of Marine special operations forces permanently detached to the United States Special Operations Command, a small unit of 86 men commanded by Col. Robert J. Coates, former commanding officer of 1st Force Reconnaissance Company, was activated on 19 June 2003 and had its headquarters at Camp Del Mar Boat Basin.[7] In 2006 it was disbanded and succeeded by the permanent Marine Corps Special Operations Command (MARSOC). Det One deployed to Iraq with Navy SEALs from Naval Special Warfare Group 1 in 2004, Marines from the detachment took part in the Second Battle of Fallujah.[8]

An SH-60 Seahawk waits for a simulated Medical evacuation.

The base unit of the Raiders is the fourteen-man Marine Special Operations Team (MSOT). Each 14-man MSOT is organized into three elements: a Headquarters (HQ) and two identical Tactical Squads. The HQ element consists of a Special Operations Officer Team Leader (SOO/Captain), Team Chief (Master Sergeant CSO), Operations SNCO (Gunnery Sergeant CSO), and a communication SNCO. Each Tactical Element consists of an Element Leader (Staff Sergeant CSO), three Critical Skills Operators (Sergeant/Corporal CSOs), and a Navy Special Amphibious Reconnaissance Corpsman (SARC). The organization allows a Team to operate on its own if needed but maintains the ability to operate as part of a bigger unit such as an MSOC or SOTF, similar to Army Special Forces ODA/B.

The first deployment for Marine Raiders was in Afghanistan in 2007. This initial deployment was marked with controversy when elements from Fox Company, 2nd MSOB were involved in a shooting incident. The incident, that resulted in as many as 19 civilians killed, involved a complex ambush by insurgents that included a suicide VBIED and small arms fire. It was alleged that the MARSOC operators killed the civilians whilst attempting to suppress the enemy firing points. The Marines were relieved from their operational charter in the country and their commander removed from duty by an Army General from USSOCOM after claims were made that the Marines reacted inappropriately and caused excessive civilian casualties.[10][11] The Marines were later found by a military tribunal to be cleared of wrongdoing.[12] Shortly after a deal was struck to send 2nd MSOB to Helmand province in lieu of the eastern provinces; in late 2007, Golf Company 2nd MSOB was sent to Helmand Province in Support of NATO operations.

A Marine Raider with 1st MSOB, assigned to Special Operations Task Force-West waits in ambush for insurgents during a joint patrol with Afghan Commandos in Helmand Province,[13] 15 April 2012.

In September 2009 the 1st MSOB returned to Afghanistan, this time in command of a joint special operations task force in the northwest of the country.[14][15] On 10 November 2009, a Marine from 1st MSOB was awarded a Bronze Star with "V" device for his actions during a battle in Farah province. When the remote weapon on his vehicle was destroyed, he climbed on top to man its MK19 grenade launcher, according to his medal citation. As enemy rounds whipped by, Price stayed put—holding his position for four hours and killing "numerous" insurgents in the process.[16]

Following General Petraeus's take over of command in Afghanistan in 2010, in support of the ALP/VSO programme (Afghan Local Police/Village Stability Operations), SOF in Afghanistan were task-organised into battalion level SOTF (Special Operations Task Forces), each with a geographic area of responsibility; for MARSOC, this was western Afghanistan and Helmand Province. In March 2012, Marine Raiders suffered several casualties to Green on Blue attacks. On 29 July 2012, a patrol of Afghan Army Commandos was ambushed by insurgents from a number of buildings in Badghis Province, three Afghans were wounded by small arms fire, Gunnery Sergeants Jonathan Gifford of 2nd MSOB and Daniel Price of 1st MSOB raced forward on an ATV to retrieve the wounded under direct fire from the enemy. After evacuating the wounded to an emergency HLZ (Helicopter Landing Zone) from where they were safely medevaced, they returned to the firefight and assaulted the enemy positions in a fierce close-quarter battle. Whilst throwing grenades down the chimney of an insurgent-occupied building, they were struck and killed by PKM fire, for his actions that day Price was awarded the Silver Star.[17][16]

The Marine Raiders were deployed supporting the Global War on Terrorism in December 2013 alongside the 26th Marine Expeditionary Unit (Special Operations Capable) where they conducted various special operations missions, ranging from direct action, reconnaissance and other mission sets.

In 2014, it was announced that the Marine Special Operations Regiment and its subordinate units would be renamed Marine Raiders.[18] However, due to administrative delays the renaming did not become official until 19 June 2015.

A Raider from the 3rd Marine Raider Battalion was awarded the Silver Star for his actions during the terrorist attack, on Radisson Blu hotel in Bamako, Mali in November 2015. The Raider led a team that rescued nearly 150 people being held hostage by members of AQIM[19]

Marine Corps Times reported that during Operation Inherent Resolve, Marine Raiders participated in the campaign to liberate Mosul in Iraq from ISIL. On October 20, 2016, after receiving small arms fire, a team of Raiders from the 2nd Marine Raider Battalion decided to occupy a point between two enemy controlled villages, later they were attacked by roughly 25 militants and an armored vehicle-borne improvised explosive device. A raider Staff Sergeant engaged and suppressed the dismounted enemy force with a sniper rifle, then exposed himself to enemy fire by climbing atop a vehicle to acquire an FGM-148 Javelin anti-tank missile and eventually destroyed the explosive-laden armored vehicle. For his actions during the engagement, the raider was awarded the Silver Star.[20] On 30 December 2016, a Marine from the 2nd Raider Battalion was wounded as a result of enemy action in Iraq.[21]

Marine Corps Times reported that during 2017, Raiders assisted in liberating Marawi in Philippines from ISIS-P militants.[2]

In February 2019, Marine Corps Times reported that since the formation of MARSOC 13 years before, it had conducted 300 operational deployments across 13 countries, awarded more than 300 valor awards, and that 43 Raiders, including two multipurpose canines, had been killed in training and combat operations.[22]

Marine Raiders' mission is to provide tailored military combat skills and special operations capability to accomplish special operations missions assigned by the Commander, U.S. Special Operations Command (CDRUSSOCOM) and/or Geographic Combatant Commanders (GCCs) via the Theater Special Operations Command.[23] Marines and Sailors of MARSOC also train, advise and assist friendly host nation forces – including naval and maritime military and paramilitary forces – to enable them to support their governments' internal security and stability, to counter subversion and to reduce the risk of violence from internal and external threats. Raider's deployments are coordinated by MARSOC, through USSOCOM, in accordance with engagement priorities for Overseas Contingency Operations.[24] 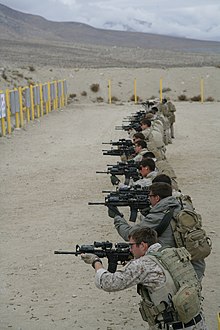 Marine Raiders fire their M4A1 carbines during CQB drills on the range.

Selection of the right personnel begins with a rigorous screening process designed to identify the right Marines for the right billet within MARSOC. Operational billets are open to men and women. Marines who want to serve as Marine Raiders must first attend Assessment and Selection (A&S). All Marines are screened to ensure that the Marines joining MARSOC meet the established prerequisites for duty within the command. The screening takes place in three stages: record screening, physical screening, and a psychological and medical evaluation.

Once a Marine is qualified through the MARSOC Recruiter's screening process, he or she will be assigned to the Assessment and Selection (A&S) Program. A&S is mentally and physically challenging. The program is conducted three times a year at an undisclosed location following the three-week Assessment and Selection Preparatory and Orientation Course.

The three-week A&S Phase 1 course serves as the precursor to the roughly three-week Assessment and Selection Course (A&S), and the nine-month Individual Training Course (ITC), with the purpose of preparing MARSOC Critical Skills Operator candidates for the challenges of A&S.

Aside from the physical training, which includes running, swimming and hiking, the course incorporates a mix of classroom instruction and practical application of basic Marine Corps knowledge and MARSOC and Special Operations Forces fundamentals.

A sergeant with a Marine Special Operations Team urges Afghan National Army Commandos to move together during a drill at a rifle range outside their compound in Herat, Afghanistan 6 Nov. Members of the 9th Commando Kandak alongside their Marine counterparts conducted a familiarisation fire in order to sharpen their weapons accuracy and safety skills.

A&S is a mentally and physically challenging evaluation that enables MARSOC to identify Marines that have attributes compatible with special operations missions and the MARSOC way of life. A&S is highly competitive. The program is conducted three times a year at an undisclosed location following the three-week Assessment and Selection Preparatory and Orientation Course.

The Individual Training Course is a physically and mentally challenging nine-month course designed to produce Critical Skills Operators who can operate across the spectrum of special operations in small teams under spartan conditions. ITC uses a building block approach; the training rigor will systematically increase to mimic the complexity and stresses of combat. During ITC students are under constant observation from the instructor cadre as well as their peers. ITC is broken down into four training phases:

Phase 1 trains and evaluates students in the basic skill sets required of all Marine Raiders. Physical fitness, swimming and hand-to-hand combat are stressed in a PT program designed around endurance, functional fitness and amphibious training. This physical training program will continue throughout the course and has been designed to prepare the student for the unique demands of special operations. Field skills including: navigation; patrolling; Survival, Evasion, Resistance, and Escape (SERE); and Tactical Combat Casualty Care (TCCC). Mission planning, fire support training, and extensive communications round out the first phase.

Phase 2 builds upon phase 1, the next phase teaches mission planning, fire support training, small boat operations and scout swimming, demolitions, photography and information collection/reporting and crew-served weapons. A 9-day exercise, "Operation Raider Spirit", is run to evaluate the candidates in patrolling and combat operations. Following on from this, students are taught Special Reconnaissance skills on a 3-week course. The end of phase 2 is an exercise, "Operation Stingray Fury", which tests the ITC students in urban and rural reconnaissance.

In the final phase, students will receive instruction on irregular warfare operations. The course culminates with "Operation Derna Bridge". Derna Bridge will require the student to use all of the skills mastered throughout the course while training, advising and operating with a Partner Nation/Irregular force. Newly graduated Marine Raiders will be assigned to one of the three Marine Raider Battalions.

All Marine Raiders are required to undergo continual language training. However, based on ability, certain Marines will be selected for follow-on language training in an Advanced Linguistics Course.

The training of Marine Raiders does not end with ITC. Marines will continue training at their assigned battalion for another 18 months. In addition, the MSOS offers advanced-level courses in a number of subject areas: special reconnaissance, Close Quarters Battle, sniper, breaching, and weapons employment. MSOS and advanced training courses:

Retrieved from "https://en.wikipedia.org/w/index.php?title=Marine_Raider_Regiment&oldid=933262156"
Categories:
Hidden categories:
The article is a derivative under the Creative Commons Attribution-ShareAlike License. A link to the original article can be found here and attribution parties here. By using this site, you agree to the Terms of Use. Gpedia Ⓡ is a registered trademark of the Cyberajah Pty Ltd.